Officer Brett Hankison, who fired 10 shots but never hit anyone after Breonna Taylor’s boyfriend shot a policeman during the raid, was charged with recklessly endangering neighbors. 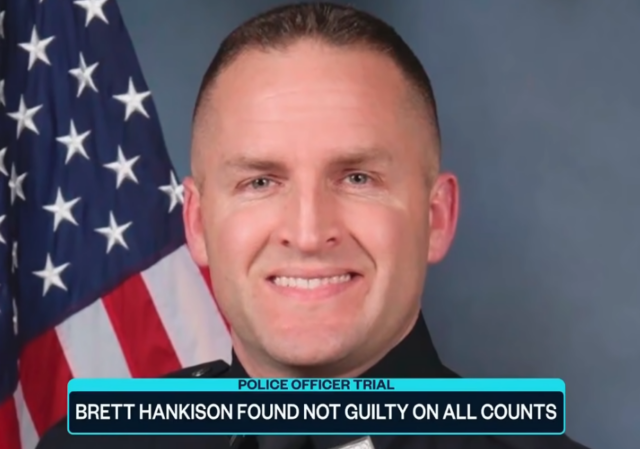 There never has been any factual basis to turn the death of Breonna Taylor into a “racial justice” cause. Her death was tragic, she was not committing any crime or act of violence towards police, but her death had zero to do with race.

Rather, police were executing a warrant to arrest Taylor’s alleged drug-dealing boyfriend, with whom Taylor was staying at the time. The warrant initially was a “no knock” warrant, and that was the narrative set by Ben Crump and the media from the start. But it was a misleading narrative, because the officers in fact knocked and shouted out that they were about to enter. Getting no response, they broke open the door.

At that point, Taylor’s boyfriend fired a shot that struck a police officer in the leg. The boyfriend claimed he didn’t hear the police announce themselves and thought they were criminals breaking in. Initially the boyfriend was charged with attempted murder, but the charges were dropped.

When police returned fire, Taylor was struck and killed, and several shots penetrated the walls into neighboring apartments.

Despite the complete lack of racial motive or other racial factors, coming just two months before George Floyd’s death, Taylor’s death became one of the alleged cases of the mass murder of blacks at the hands of police that led to protests, riots, and looting after Floyd’s death.

Taylor’s death at first went largely unnoticed outside Louisville. CNN covered the story for the first time on May 13, 2020, about two weeks before Floyd died.

By the end of May, Walker’s distressed 911 call from the night Taylor died had been released, and Floyd had died days earlier at the hands of police in Minneapolis. Protests In Louisville turned violent, with gunfire erupting during protests. Seven people were shot downtown overnight May 28. Louisville Mayor Greg Fischer said the shots were fired from within the crowd, not from the police.

In July, protesters marched to Cameron’s front lawn, and 87 people were arrested for criminal trespass, among other charges.

In September, protests began to take place nightly in Louisville after a grand jury didn’t charge the other police officers involved in Taylor’s death, indicting only Hankison.

By then, Taylor’s name was known nationally and beyond, just as Floyd’s was, and her death was a central part of the protests that rocked the country throughout much of 2020.

Celebrities took up the subject of Taylor’s death, including NBA star LeBron James and Oprah Winfrey, who put Taylor on the cover of her magazine.

As so often happens in these highly-politicized allegedly race-related cases, prosecutors were under pressure to find some pretext to file charges against somebody, anybody.

Officer Brett Hankison, who fired 10 bullets none of which hit anyone, was charged with recklessly endangering the neighbors. Yes, that’s right, clearly a pretextual prosecution. One which a jury didn’t buy, returning a Not Guilty verdict on March 3, 2022, as the NY Times reports:

The only officer to be charged for his actions during the fatal police raid on Breonna Taylor’s apartment was found not guilty on Thursday of endangering three of Ms. Taylor’s neighbors by firing bullets into their home during the botched operation.

Jurors acquitted the former officer, Brett Hankison, whose bullets did not strike anyone, on all three counts of wanton endangerment after deliberating for about three hours….

The killing of Ms. Taylor, a 26-year-old Black woman who worked as an emergency room technician, was among several police killings that set off a wave of protests across the country in 2020. The demonstrations were particularly sustained in Louisville, where activists protested for more than 100 days in an ultimately unsuccessful effort to persuade the Kentucky attorney general to file charges against the officers who shot Ms. Taylor.

Hankison testified on his own behalf:

Former Louisville detective Brett Hankison testified in his own defense Wednesday about his actions during the police raid that left Breonna Taylor dead, saying the gunfire began with a muzzle flash that illuminated a shadowy silhouette, and he thought it was someone firing an automatic rifle at his fellow officers.

Hankison is not on trial for the 26-year-old Black woman’s death but for firing bullets that went into an adjacent apartment, endangering a pregnant neighbor, her young child and her boyfriend.

Asked if he did anything wrong during the raid, Hankison replied, “absolutely not,” even though he acknowledged firing into the window and patio door. As for Taylor, he said, “She didn’t need to die that night.” Breonna Taylor’s mother, Tamika Palmer, then stormed out of the courtroom.

Hankison said that as a police battering ram broke open Taylor’s door, the blast of a gun lit up the apartment’s hallway and his fellow officer fell wounded in the doorway….

Needless to say, the protests go on:

A few dozen demonstrators held a brief march in Louisville on Thursday night after the jury delivered its verdict in the Hankison case, returning to the public square where they gathered for months in 2020.

“Everybody got justice for 2020 but in Kentucky we can’t even get wanton endangerment charges,” Tyra Walker, co-chair of the Kentucky Alliance Against Racist and Political Repression, said at the gathering.

Another small group of protesters gathered downtown Friday, a day after the verdict, holding signs and chanting Taylor’s name.

Among them was Jeffery Compton, who said the jury’s verdict sends a message that “if you live next door to somebody Black, you can get shot (at) and they can get away with it.”

The NY Times further reports the government still is looking for a way to prosecute even after this acquittal:

“I think it’s a good day, finally, for law enforcement,” Mr. Mathews said, though he noted that federal investigators were still scrutinizing the raid and could bring separate charges if warranted. The F.B.I. office in Louisville has been investigating Ms. Taylor’s death since May 2020, and the Justice Department is conducting a wide-ranging investigation of the city’s Police Department.

After Thursday’s verdict, a spokesman for the bureau said it was continuing to work with the Justice Department “to determine what, if any, federal charges are warranted.”

They didn’t charge him for an excessive noise violation?

Message to Soros: better get the bugs worked out of those voting machines,

You think the city of Louisville is a Republican stronghold now?

It’s better than Minneapolis or the state of Georgia. A cop can get a fair trial in Louisville, unlike those other places.

There should not have been a trial, that trial and it’s costs and impact on his life, is severe and unjustified punishment.

Looking at trial location it is good news that even a jury of Democrats refused to ruin an innocent mans life to advance the Dems racial narrative.

Yes she was committing a crime. Jamarcus Glover jail phone calls make that crystal clear. She was the money person for that drug operation.

Another fun fact that never gets discussed is the body camera footage from seconds after the shooting. Breonna boyfriend Kenneth Walker tells the officer TWICE that it was Breonna who was shooting at them. Bad for the narrative I guess.

Another fun fact that never gets discussed because it is bad for the narrative is the dead body found in Breonna’s car. Google it.

It’s never sat well with me that no drugs or money was found. One early article stated the original search warrant was never completed and that article got memory holed with a quickness, never to be found again. Per the trial, that original warrant was abandoned and a second warrant pertaining to the resultant homicide investigation was obtained and completed. It’s quite possible they flat out missed evidence of Taylor’s involvement because they were focused on all the shooting evidence.

Who did Kenneth Walker say was shooting at the cops?

Without wishing to pretend that returning fire is easy, it does feel a bit off that a police officer can shoot ten times so badly that he not only doesn’t hit his target, he puts people in other properties actively at risk too.

That may not be reckless but it does sound negligent.

Do you not know how shitty apartment buildings work? Stuff goes right through the walls…many of them aren’t firewalled.

Officer Brett Hankison, who fired 10 bullets none of which hit anyone
Not actually hitting anyone does not make it not negligent or reckless behavior. After all, they arrest you for DUI, even though you haven’t been in accident.

“if you live next door to somebody Black, you can get shot (at) and they can get away with it.”
/sigh/ You don’t have to disagree with the verdict to say that this guy is missing the point. Race isn’t the issue here.

I watched some of his testimony and it was emotional but good and he looked professional in his dress and demeanor. Business suite, answering clearly looking at the questioner. Compare this with Kim Potter’s befuddled granny act complete with granny clothes and mumbling answers and long delays. I still say she was coached by her attorney’s to act this way and it backfired. Most people want to see police officers that are professional and in control and when she put on that act I think it eroded their belief in her.

It is clear that Kim Potter should not be in jail, good people should not have their lives destroyed to appease black racists.

One minor detail in the article needs to be refined. The officers were serving a search warrant, written specifically for Breonna Taylor’s apartment as part of a multi-warrant sweep that night. The arrest warrant narrative is Crump misdirection. One of many narratives that refuse to die in this case.

Did this officer formerly work as an Empire Stormtrooper?

If I recall correctly, this blithering idiot is the cop who — when shots were fired inside — ran around to the back of the apartment and unloaded a full magazine through a closed window blind *blindly* firing into the apartment where his fellow officer had just been hit and peppering at least one neighboring apartment with bullets. Correct me if I’m wrong, please.

If I’m right, he *should* have been arrested at the scene by his fellow officers.

He IS GUILTY – of POOR MARKSMANSHIP!! He fired TEN shots and didn’t hit anyone?? They do better than that in Chicago! And to TRY an officer because he MISSED and his shots went into other apartments?? That’s just a LONG REACH! A COMPETENT DA would never print that to trial – but then!!