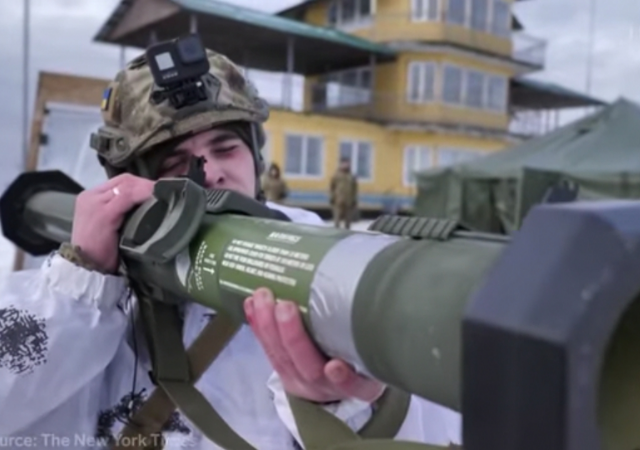 Following the Russian military’s announcement that it was scaling down of the operations and planed to focus on consolidating its gains in the Donbas region of eastern Ukraine, the Ukrainian governments claims that Moscow is trying to split the country ‘like North and South Korea,’ referencing the Cold War Communist strategy of diving the Korean peninsula on ideological lines.

The UK TV channel SkyNews reported the warning issued by the chief of Ukrainian military intelligence:

Russia is trying to split Ukraine like “North and South Korea” and create a Moscow-controlled region after failing to take over the whole country, the head of Ukrainian military intelligence said.

In remarks released by the Defense Ministry, he said Putin realised “he can’t swallow the entire country” and would likely try to split the country under “the Korean scenario”.

The claim made by the Ukrainian intelligence was bolstered by the Russian announcement to hold a ‘referendum’ in Luhansk, situated in the western part of Donbas.

The Ukrainian leader was distraught by the failure of the NATO and Western allies to deliver of much-promised and highly-publicized Polish fleet of soviet-era fighters jets. Poland’s generous offer ran into NATO bureaucratic hurdle, and the delivery has so far been delayed.

The Associated Press, on Sunday, reported the Ukrainian President’s plea:

Ukrainian President Volodymyr Zelenskyy accused the West of lacking courage as his country fights to stave off Russia’s invading troops, making an exasperated plea for fighter jets and tanks to sustain a defense in a conflict that has ground into a war of attrition. (…)  Zelenskyy lashed out at the West’s “ping-pong about who and how should hand over jets” and other weapons while Russian missile attacks kill and trap civilians.

“I’ve talked to the defenders of Mariupol today. I’m in constant contact with them. Their determination, heroism and firmness are astonishing,” Zelenskyy said in a video address early Sunday, referring to the besieged southern city that has suffered some of the war’s greatest deprivations and horrors. “If only those who have been thinking for 31 days on how to hand over dozens of jets and tanks had 1% of their courage.”

It was not a policy declaration but yet another case of incoherent mumbling by the current U.S. President. On Sunday, President Biden ended his speech in Poland: “For God’s sake, this man cannot remain in power.”

The remarks alarmed White House staffers and European leaders alike. U.S. Secretary of State Antony Blinken quickly clarified that the U.S. does not seek a regime change in Russia. “As you know, and as you have heard us say repeatedly, we do not have a strategy of regime change in Russia — or anywhere else, for that matter,” Blinken explained.

French President Emmanuel Macron on Sunday warned against verbal “escalation” with Moscow, after US President Joe Biden called Russian President Vladimir Putin a “butcher” over his invasion of Ukraine.

Macron told broadcaster France 3 that he saw his task as “achieving first a ceasefire and then the total withdrawal of (Russian) troops by diplomatic means”.

“If we want to do that, we can’t escalate either in words or actions.”

President Biden’s careless remarks are a boost to Kremlin’s anti-Western propaganda. UK’s SkyNews noted that President Biden had “ceded a gift to Moscow’s propaganda machine, which will doubtless use his call for an end to the Putin-era to amplify false claims that the United States and its NATO allies pose an existential threat to the country.”

As the Russian military continues its relentless offensive, millions of Ukrainians have been displaced or left homeless.

Around 3.7 million Ukrainians have left their country. Almost 90 percent of them are women and children. This was in sharp contrast to the 2015 migrant crisis when millions of migrants from the Middle East and North Africa swarmed Europe, most of them young men.

According to the United Nations, nearly half of the Ukrainian children have now been displaced. “One month of war in Ukraine has led to the displacement of 4.3 million children – more than half of the country’s estimated 7.5 million child population,” the UN figures released this week show.

More than 1,100 civilians have been killed in the conflict so far, the UN says.

French Housing Minister Emmanuelle Wargon says around 30,000 people fleeing the war in Ukraine have arrived in France, and that around half of them have since traveled to other places such as Spain.

She told Franceinfo radio the government was preparing to welcome 100,000 people from Ukraine.

According to the United Nations, more than 3.7 million have fled Ukraine. Most have gone to neighboring Poland. Greece has offered “to take in people who arrive by plane,” Faeser told the Tagesspiegel newspaper.

Biden is a bumbling fool and Macron is a lying POS if he thinks that NATO powers will be able to… “achieving first a ceasefire and then the total withdrawal of (Russian) troops by diplomatic means”.

Remember that the Russians sat in on the Iranian negotiations and know that the US is a giant puppy dog right now. It’s quite logical to assume that the groveling US posture in said negotiations, which began long before this skirmish, were a key factor in Russia’s decision to invade.

How did we end up the side of the Nazis and the Secret Bio Labs?

Failure to quench the thirst of the tree of liberty.

Because we are willing to deal with neocons and Nazi’s if it means that we can have free markets and not have CRT taught ion our schools. We fail to forget, the lesser of two evils is still evil.

They’re going to split the county like North and South Korea.

I have no comment because I’m not a geographer.