The Associated Press: “Iran claimed responsibility Sunday for a missile barrage that struck near a sprawling U.S. consulate complex.” 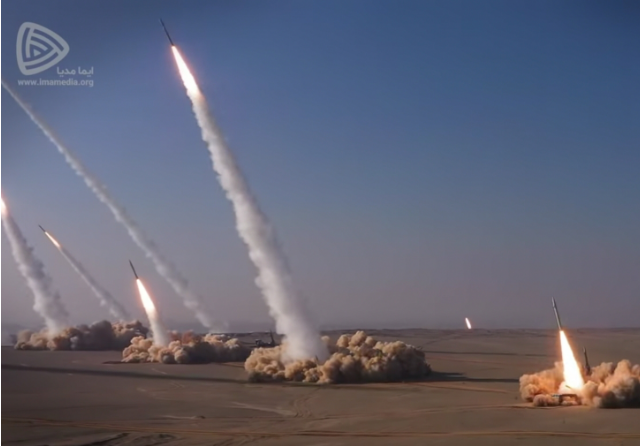 As President Joe Biden prepares to restore the Iran nuclear deal, the Iranians fired missiles at the U.S. consulate in northern Iraq. At least 12 rockets fired from Iranian territory landed in the city of Erbil early Sunday morning.

“Iraqi security officials said at least six missiles were fired toward the US consulate in Erbil,” German public broadcaster Deutsche Welle confirmed. “Some of the missiles struck the Ain Assad airbase, which hosted the largest US deployment in Iraq. There were no casualties from the strikes,” the broadcaster added.

While the Iranian missile strike were primarily aimed at U.S. targets, the IRGC claimed that it was attacking “Zionist strategic centers” in retaliation for a recent Israeli strike that killed two IRGC operatives, Iran’s IRNA state news agency purported.

The Associated Press reported the details of the Iranian strike:

Iran claimed responsibility Sunday for a missile barrage that struck near a sprawling U.S. consulate complex in the northern Iraqi city of Irbil, saying it was retaliation for an Israeli strike in Syria that killed two members of its Revolutionary Guard earlier this week.

No injuries were reported in Sunday’s attack on the city of Irbil, which marked a significant escalation between the U.S. and Iran. Hostility between the longtime foes has often played out in Iraq, whose government is allied with both countries.

Iran’s powerful Revolutionary Guard said on its website that it attacked what it described as an Israeli spy center in Irbil. It did not elaborate, but in a statement said Israel had been on the offensive, citing the recent strike that killed two members of the Revolutionary Guard. The semi-official Tasnim news agency quoted an unnamed source as saying Iran fired 10 Fateh missiles, including several Fateh-110 missiles, which have a range of about 300 kilometers (186 miles).

An Iraqi official in Baghdad initially said several missiles had hit the U.S. consulate in Irbil, the intended target of the attack. Later, Lawk Ghafari, the head of Kurdistan’s foreign media office, said none of the missiles had struck the U.S. facility but that residential areas around the compound had been hit.

In a Twitter post, he said the lack of reaction from the international community to repeated attacks by Iran on Kurdistan “is of great concern” and was encouraging future attacks by Tehran.

A U.S. defense official said the strike was launched from neighboring Iran, and that it was still uncertain how many missiles were fired and where they landed. A second U.S. official said there was no damage at any U.S. government facility and that there was no indication the target was the consulate building, which is new and unoccupied.

Between the Iranian missile attack last night in Erbil and Russia’s demands for a sanctions white channel, I just don’t see how the Biden White House can move forward with its plans for an Iran Deal.

It is worth noting that under the provisions of the nearly-finalized nuclear deal the Biden administration may remove the IRGC from the list of international terrorist organizations — reversing the decision made by former President Donald Trump three years ago, the circulated draft of the agreement suggests.

After 11 months of talks in the Austrian capital Vienna, President Biden administration appears to have finalized the draft of the restore nuclear deal with Tehran.

The IRGC and its foreign terrorist wing, Quds Forces, also stand to benefit from the lifting of economic sanctions as part of the Biden nuclear deal. The IRGC funds and arms leading jihadi and terrorists groups across the Muslim world, including Gaza-based Hamas, Lebanese Hezbollah and Yemen’s Ansar Allah Houthi militia.

President Biden’s nuclear pact with the Mullahs could also grant Russians a safe haven from U.S. and Western sanctions imposed in wake of the Ukraine invasion. On Thursday, chief Russian negotiator, Michael Ulyanov, hinted that the Biden White House could allow the Russians to use Iran as a “sanctions evasion hub.”

Biden says he will have an emergency meeting with his cabinet to see if he can determine who is in charge of the United States on weekends.

May I suggest expanding the topic to include weekdays, and make it public?

I suspect that pulverizing Ukraine is OK with Biden if Russia can deliver the Iran deal (with its sanctions relief for Russia).

Don’t underestimate Biden. He’ll not only sell out Ukraine to Putin. He’ll sell out all of NATO to get Iran to accept this administration’s unconditional surrender and sign the surrender documents.

Iran is sure no matter what mayhem they can cause they still will get a sweetheart deal out of the weak Sundowner.

“Iran’s powerful Revolutionary Guard said on its website that it attacked what it described as an Israeli spy center in Irbil. It did not elaborate,…”

Why would they need to elaborate? The message is clear enough. In addition to surrendering the U.S. to Iran, so he can sign a surrender document about which he’ll lie and claim is a nuclear “deal,” as he’s lied to us about everything else, Biden will have to kneecap Israel.

Obviously if the most anti-American President in our history is betraying this country on everything from open borders to his war on domestic energy, why wouldn’t he sell out Israel.

OK, a country that is known and declared to be a center and source of international terrorism fired ballistic missiles [Fateh 110] at a protected by international law US diplomatic compound in a third country. The Fateh 110 was designed and both made in defiance of international sanctions, and with the help of the Chinese government in defiance of treaties [specifically the China Great Wall Industry Corporation (CGWIC)]. In passing, the latest version of the Fateh 110 is said to have a max warhead weight of 650 kg. [about 1400 lbs.]. While there may be other factors that would prevent mounting a nuclear warhead on that particular frame, as someone who has written in the field I note that the primitive “Little Boy” gun type fission bomb only used 64 kg. of highly enriched U-235. And while “Little Boy” overall weighed far more than what the Fateh 110 can carry, in the time since designs have gotten smaller and lighter. Today probably a first year college physics student could design one that would work within those parameters.

So it makes every sort of sense that the Democrats who control our government completely and their allies to the Left would prioritize making it easy, known, and functionally acceptable for Iran to develop nuclear weapons to attack the US, its forces, and American allies.

They are, at least consistent.

Only in America is anybody saying this was an attack on a US Consulate.

Yes, but are they telling you this? —

Children In China Diagnosed With Leukemia After Taking Chinese Vaccines:

Although, from their article:
“Iraqi security officials said at least six missiles were fired toward the US consulate in Erbil, according to the AP. They added that several missiles hit the building.

However, the AP reported, citing a US official, that there was no evidence that the attack was targeting the US consulate.”

So Iran says it was trying to hit Israeli targets (in Iraq?), Iraq says it was attacking the US and the US says it wasn’t.

It’s a mess all around. Perhaps Israel should stop attacking Iran and Iraq should start defending itself against Iranian attacks.

That Iranian oil will come at a price.

But still cheaper “in the long run” than made-in (so to speak) American oil. Says the Dem’s wacko lunatic nutjob dominated “green” base.

Who cares if the “long run” is at least 50-100 years in the future. Your great, great grandchildren might thank you. After wishing you to eternal damnation for sentencing them to rule by Marxists.

Google Earth’s images of Israel have been intentionally blurred since 1997, due to a US law known as the Kyl-Bingaman Amendment which prohibits US satellite imagery companies from selling pictures that are “no more detailed or precise than satellite imagery of Israel that is available from commercial sources.” As a result, it is not easy to locate the exact position of the Yahalom batteries; for example, given the number of facilities and the quality of the imagery, the site at Palmachim is particularly challenging to spot.

However, this law is actually being revisited this year and could soon be overturned, which would be a massive boon for Israel-watchers. Until that happens though, Israel will remain blurry and difficult to analyze, making creative OSINT techniques like Harel’s all the more useful.

Take that article with a grain of salt.

The capability to locate and characterize radar systems is as old as radar is. So are the many techniques for ‘spoofing’ such information and more are dreamed up every day.

Patriot missile batteries are highly mobile, as are their targeting radars. However, they don’t even have to turn those radars on until they are cued to do so by the larger surveillance radar systems which are part of an integrated air defense system.

There is nothing that Joe Biden touches that he doesn’t screw up. His legacy will be a bad one. People are already dying. And more will.

Iran fired missiles at US interests in retaliation against Israel. That means that Iran is more afraid of Israel than of the US. Let’s Go Brandon!

Brandon … and his puppeteers are … cowardly traitors! That is all.

It isn’t much of a stretch to argue that Biden wants the US dependent on Iranian oil precisely because that impedes US intervention against Iranian military and terror actions. I wonder what Biden getting paid by Iran, just like I wonder how much of the secret cash Obama paid Iran ended up in Obama and Biden’s pockets.