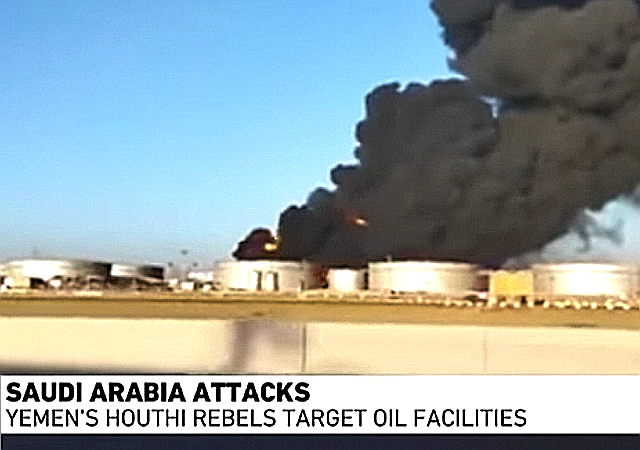 On Friday, the pro-Iranian Houthi militia claimed responsibility for at least 16 aerial attacks across Saudi Arabia, targeting an oil depot owned by the Aramco oil company and other sites in country’s capital Riyadh.

The attack on Saudi oil infrastructure could severely cripple the world economy. In the wake of the Russian sanctions, the United States and Western economies are counting on Saudi Arabia — the world’s biggest oil producer besides Russia — to step up its oil production to stabilize soaring fuel prices. “Oil prices have soared since Russia’s invasion of Ukraine sparked supply fears, prompting Western powers to implore OPEC countries to ramp up production,” the French news agency AFP noted on Friday.

Yemen’s Houthi rebels attacked an oil depot on Friday in the Saudi city of Jiddah ahead of a Formula One race in the kingdom. It was the rebels’ highest-profile assault yet, though Saudi authorities pledged the upcoming grand prix would go on as scheduled.

The attack targeted the same fuel depot that the Houthis had attacked in recent days, the North Jiddah Bulk Plant that sits just southeast of the city’s international airport and is a crucial hub for Muslim pilgrims heading to Mecca. No injuries were reported in the attack. (…)

Saudi authorities acknowledged a “hostile operation” by the Houthis targeting the depot with a missile. (…)

Brig. Gen. Turki al-Malki, a spokesman for the Saudi-led coalition, said the fire damaged two tanks and was put out without injuries.

“This hostile escalation targets oil facilities and aims to undermine energy security and the backbone of global economy,” al-Malki said, according to the state-run Saudi Press Agency.

The Biden White House was quick to condemn the latest terror attacks by Iranian-backed Houthis. The drone strikes “were clearly enabled by Iran in violation of UN Security Council resolutions prohibiting the import of weapons into Yemen,” President Biden’s National Security Advisor, Jake Sullivan, admitted on Friday. “The Houthis continue to reject these calls and respond with terrorist acts and military offensives, all of which extend the Yemen conflict and the consequent humanitarian crisis,” he added.

This is a curious statement considering the role played by the Biden White House in emboldening Houthis and their Iranian paymaster, the Islamic Revolutionary Guard Corps (IRGC).

In early 2021, President Joe Biden revoked the terrorism designation of the Houthi militia. The decision was a clear gesture of appeasement towards the Iranian regime as the Biden White House began its diplomatic push to restore the 2015 nuclear deal.

Houthi, formally known as Ansar Allah or ‘fighter for Allah,’ is trained and armed by the IRGC, Iranian regime’s military and foreign terrorist arm. In a bid to sweeten the new nuclear deal with Iran, the Biden White House is reportedly considering the removal of the IRGC from the U.S. terror list, reversing President Donald Trump’s 2019 decision.

President Biden’s nuclear agreement with Iran could be reached within a “matter of days,” EU foreign policy chief, Josep Borrell, declared on Saturday. “We are very close but there are still some issues pending,” Borrell told reporters. “I cannot tell you when or how, but it is a matter of days,” he added.

The restoration of the Obama-era nuclear deal may entail lifting of all or most of the sanctions on Iran, the world’s biggest sponsor of terrorism. If President Biden’s deal with the Iranian Mullahs goes through, it will perhaps be the biggest boost to the global terrorism since his disastrous withdrawal from Afghanistan.

Obviously, we aren’t sending enough money to Iran nor helping them build their nukes fast enough. God forbid we become energy independent again and restore/double down the Iran sanctions. That would be too logical.

And Biden just shut down the Israel-Greece-Italy pipeline too. Iran just doesn’t understand the concept of appeasement.

Are we getting ready to give Iran more money? Why won’t Saudi take our calls? I wish I were a political scientist so I would know what’s the problem.

Eventually, in a hundred years or so, after Saudi Arabia is pumped dry and we finally realize green energy is insufficent, the hispanic people running the country might consider pumping American oil.

Expect more of the same as Biden project weakness, disarray, incompetence and disorganization to our enemies.

So we’re on the verge of a deal, brokered by Russia, to expedite the Iranian’s acquisition of nuclear weapons. We are thanked by the Iranian regime with attacks on the Saudi oil infrastructure. Do I have this correct?

The whole world is laughing at us.

This will be great for pump prices. And Biden is responsible for this because he has let the Iranians behave like the animals that they are.

I so want SA to take Iran down

“I cannot tell you when or how, but it is a matter of days,”

Lets move on destroying Iran’s water, power infrastructure, leaving them to live like they deserve. That is something
they can understand.

Let me guess, they used American weapons left behind by The Big Guy in Afghanistan.

The Taliban are not friends of the Iranian Mullahs, or of the Houthis. They cooperate occasionally, but I doubt they would have given them any of the US weapons Biden left for them.

These are the same Houthis the Saudis have been battling for years, formerly with US help, until Dems (and some conservatives) got their panties in a knot because the Saudis bombed a school bus or something, and suddenly we couldn’t possibly support them any more, so the US decided to let the Houthis run riot.