“We’re asking the public’s help in solving this disgusting and disgraceful offense committed against a vulnerable, elderly female who was doing nothing but walking down the streets of NYC.” 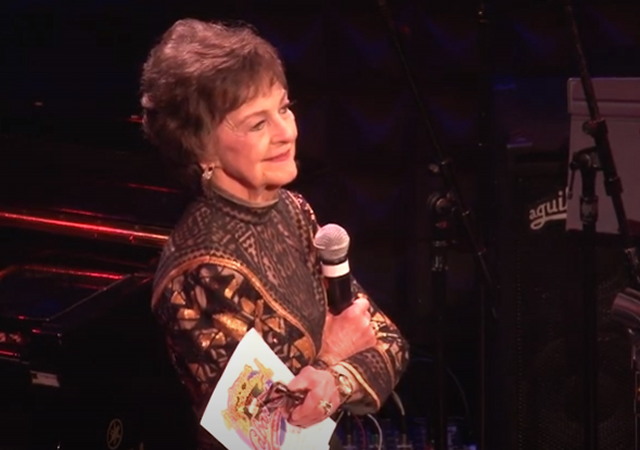 Barbara Maier Gustern was a well-known Broadway singing coach who taught some very famous singers over the years. Last week, she was shoved to the ground outside her New York City apartment in a seemingly random attack.

This week, she died as a result of her injuries. She was 87 years old.

Barbara Maier Gustern, a celebrated Broadway singing coach who worked with the likes of Debbie Harry, Justin Vivian Bond and Taylor Mac, has died after being shoved to the ground in Manhattan last week. She was 87.

“Today, at 11:15 a.m., we have lost one of the brightest little flames to ever grace this world,” her family wrote on Facebook. “I ask that you all give me a little time and space, but I want to make time for anyone and everyone who wants to know more about her final moments.”

During a press conference on Tuesday afternoon, Chief of Detectives James Essig called it an unprovoked and senseless attack.

“A short time ago today, [Gustern] died from her injuries,” he said. “We’re asking the public’s help in solving this disgusting and disgraceful offense committed against a vulnerable, elderly female who was doing nothing but walking down the streets of NYC.”

The attack occurred just before 8:30 p.m. on March 10 as Gustern was walking near West 28th Street between 8th and 9th avenues, close to her apartment in Chelsea. Police told Gothamist that a female suspect shoved Gustern to the ground where she hit her head, then fled the scene.

People are searching for the attacker:

Barbara Maier Gustern has died from her injuries. The person who did this needs to be found and prosecuted to the full extent of the law. Please come forward should you have any information about this case. pic.twitter.com/np9W5ilAF2

Police looking for this woman for allegedly shoving vocal coach, 87-yr-old Barbara Maier Gustern to the ground Thursday night in Chelsea. She's in critical condition. A Facebook post from her grandson says even if she does recover, she won't be the same. @1010WINS @NYPDTips pic.twitter.com/6pKLF2mORj

“Today, at 11:15AM, we have lost one of the brightest little flames to ever grace this world,” the family wrote on Gustern’s Facebook page.

“I ask that you all give me a little time and space, but I want to make time for anyone and everyone who wants to know more about her final moments,” the post said.

These random attacks keep happening in New York City and people are dying as a result.

It’s time to start locking up the lunatics who are doing it.

Gee I hope the Kamala has the $1000 in her kitty so she can post bail for the assailant.

Not a chance. The perp isn’t black.

Be nice about gingers…!

People should know better than to live in or visit New York City.

Who wants to bet against known mental health issues for the attacker?

With previous instances of violence.

Are they sure that’s a woman? Looks a bit like Admiral Levine minus a few pounds.

Not even a white supremacist male NRA member, but a crazy white chick. What are the odds?
Unless “she’s” a trans version of Sam Kinison.

it takes high profile victims to get justice. EVERY ONE should have the same value put on their life.

1) I am surprised, given the series of attacks in NYC that it was a white attacker.

2) But the fact that it is known to be a white attacker is why the police are really looking for the attacker. This is Democrat NYC.

She’ll probably identify as a male of another race.

Believe it or not, white attackers do exist. They’re not even all that uncommon. They’re just not the typical case. In any case like this, if you always bet the perp is black you will lose a lot of the time; but you’ll come out ahead in total.

Yes, Milhouse, white attackers do exist. But this baseless assuming is a double edged sword. Remember the D.C. sniper case. All of a sudden, profiling was back in style, baby! With a vengeance. We were told that likely perp was a middle aged white man. No doubt caused the Po Po to miss the clues that led to John Allen Muhammad and his teen aged par amour/protege Lee Malvo.

The MFM so, so, sooo wanted it to be a middle-aged white man.

Don’t be the MFM.

There’s also a question of how accurate the profile is. But in general profiles tend to be more accurate than random guessing, which is why they’re at least somewhat useful.

Let’s wait to hear her name before declaring her as “white” from the pic only. Many Arabs and Hispanics identify as “white”.

Although I tend to agree that her appearance is what is driving the cops to actually look for her. If she is proven to be a “white attacker” she’ll beheld up to negate all assaults by any other group.

She was a good friend and mentor to our kid’s favorite teacher. Despicable and inexplicable.

Thank God, the perp had her mask with her. Otherwise, someone could have gotten hurt.