Biden Calls Doocy ‘Silly’ Over Questions About His Russia ‘Gaffes’ in Poland, Corrections From White House

Biden Calls Doocy ‘Silly’ Over Questions About His Russia ‘Gaffes’ in Poland, Corrections From White House

It seems like Biden had no idea the White House walked back three statements he made in Poland last week. 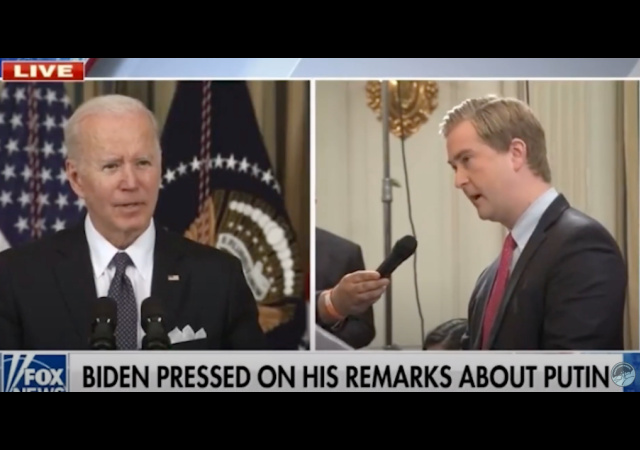 Yes, Biden. How dare Peter Doocy ask you about the “gaffes” you made in Poland. I don’t think they were gaffes. I legit think Biden has no idea what he’s talking about.

1. No, we are not sending troops to Ukraine.
2. No, we do not have plans or thinking about using chemical weapons on Russia.
3. No, we are not planning a regime change in Russia.

DOOCY TIME (from earlier): "Are you worried that other leaders in the world are going to start to doubt that America the back if some of these big things that you say on the world stage can't getting walked back?"

Biden: "What’s getting walked back?" pic.twitter.com/n7t2HiNGbS

Biden: “You interpret the language that way. I was talking to the troops. We were talking about helping train…Ukrainian troops that are in Poland….That’s what we talked about.”

Doocy: “So when you said you’re going to see when you’re there, you were not intending to send–” pic.twitter.com/o8ApZlbtAP

Doocy: “And when you said a chemical weapon used by Russia would trigger a response in kind —”

Biden: “It will trigger a significant response.”

Biden: “I’m not going to tell you./ Why would I tell you? You gotta be silly.” pic.twitter.com/5Ctcn56EbU

Doocy: “The world wants to know.

Biden: “The world wants to know a lot of things. I’m not telling them what the response would be. Then, Russia knows the response.” (5/5) pic.twitter.com/syzyE4kjI7

Look at what Biden held in his hand. As Jake Schneider said, Biden still screwed up his press conference. The dude should not be out of his basement.

This is beyond sad. But hey at least we don’t have mean tweets!

Biden had to have “I was not articulating a change in policy” written verbatim on a notecard so he wouldn’t screw it up… and he still screwed it up pic.twitter.com/OvEwlHQVry

The cheat sheets he had in his hand reminded of the Bob Newhart skit on prepping Abe Lincoln for the Gettysburg Address. “Abe, do the sequence the way Charlie wrote it, would ya?”

Listen, enough people go with Biden’s b.s. because they’re profiting off it handsomely. Like his wife.

You can’t expect someone who doen’t know the truth or tell the truth to actually know or tell you the truth.

How is this not 25th Amendment time – insisting again today on regime change and the Doocy exchange?
Putin has to be playing this stuff to advantage day and night in Russia. He does not even have to make things up. How is this not dangerous?

On top of this, we have Zelinsky still begging for arms. How come isn’t he overwhelmed with them by now? Also, they have not cut off the money to Russia for energy or other things and announced a Task Force to study reducing reliance on Russian energy. Biden had to have his arm twisted to take 100,000 folks here, evidently too busy taking millions of illegals across the border. Why couldn’t this all be interpreted as a message to Zelinsky, “Hurry up and lose already”?.

It’s very simple. The 25th amendment requires the vice president and a majority of the cabinet, plus, if the president objects — and Biden definitely would object, since he has no idea how gaga he is — two thirds of each house of congress. That’s significantly more than it takes to remove him by impeachment.

I don’t think those who want Harris to replace him can get those numbers. Especially if the Republicans don’t cooperate, and I don’t see why they should. I wouldn’t; I’d tell the Dems this is your mess, you clean it up without our help.

The 25th amendment requires a 2/3rds vote of both houses of congress only. Cabinet members do not vote.

1. The 25th requires a vote of the vice president and the majority of the cabinet.

Because Zelensky is scarcely better than Putin, and it is easier (and probably safer, given Ukraine’s incredible corruption) to sit on the sidelines and tell Zelensky “You go, girl” rather than arm him indiscriminately.

You’re right! When Russia invaded Afghanistan in the 70s we called Osama Bin Laden….a freedom fighter!! We know what happened! What are we calling Zelenski now? A freedom fighter!!
Obama created the corruption in Ukraine and Putin is ending it!

Also 0bama did not create the corruption in the Ukraine. And it is ludicrous to speak of Putin ending corruption — anywhere.

Who cares what we “called” him — the CIA funded him as one.
Yeah, they deny it. Just like Hunter’s laptop is “Russian disinformation.”

No, the CIA never funded Bin Laden. The Pakistanis didn’t allow the CIA to choose which groups in Afghanistan got funded, let alone to hand out the funding itself. All US aid went first to Pakistan, and it was they who decided whom to distribute it to, which included the group with which OBL was then fighting.

My prediction is that as this goes worse for the EU/US, Biden will “suddenly die” in his sleep or be “25th”, they TPTB will try to blame all EU/US actions on Biden but the rest of the world won’t buy it.

I forget the next big day will be march 31. Will the EU cough up rubles for gas? Or will they default?

I hear that Joe Biden has decided to appoint Will Smith as his special envoy to Moscow, chosen to meet directly with Putin for a ‘hand to face’ encounter.

Being POTUS is hard okay? Like really hard and stressful!

I don’t have time to be telling you what questions you are allowed to ask me and come up with all these great quotables for my minions to tweet about ok?

Someone get Doocy out of here, this guy cannot remain in power!

Anybody that voted for that retard should be very, very ashamed of themselves.

It wasn’t all machines. I know a few people who admitted to voting for him not long after the election was called. Don’t think for a minute that I don’t read them the riot act for supporting this retarded pedophile at every chance.

How many fraudulent votes were the machines responsible for?

As should the large number of high profile never Trump folks and r establishment both in and out of office. They had a binary choice of Trump or Biden. No I don’t want to hear about write in or third party candidates; any vote action other than a vote for Trump was effectively a choice to assist the Biden campaign.

These jacklegs knew how much Biden had declined in ability and choose to oppose Trump. Please don’t tell me that the DC cocktail party circuit wasn’t aware of Biden’s decline or that no rumors existed about his family financial shenanigans. Biden had the reputation, at his peak, of a center/left, publicly genial, privately boorish but not very bright person. The people that ignored all this and in some cases actively suppressed this information can not be trusted on any issue. They deliberately decided to oppose a competent President and toss him out because they didn’t like his communication style and his refusal to play by inside the beltway rules.

Now we are seeing exactly how bad their decision was. The many failures and daily incompetence of the Biden Admin is directly attributable to these establishment elites and their spiteful choice. They choose to imperil the Nation because at root DJT hurt their feelings by his example of accomplishment. Eff these people.

My best friend was one. She honestly believed that it was only a stutter. She is not stupid.

What does she believe now?

Joe Biden is sadly unbelievable. I mean that no one can believe a single word that this man emits from his mouth. He is untrustworthy and totally out of control. Joe Biden poses a real and present danger to the United States of America and its people.

Joe Biden is unfit to lead and must resign immediately for the good of our country.

It has become increasingly obvious that Brandon is not running the show, when he is corrected so many times within a short period. Will the MSM ever show any interest in who is? Will we ever see a book titled “The Puppetmasters”?

How would making Harris president be for the good of the country? I think we’re better off with Slow and Senile Joe.

Who would listen to Harris? Even the Dems might be forced to abandon ship. A feckless president is better than a dangerous one.

Who would listen to her? The same people who listen to him now, and for the same reason. She’d be president, so whatever idiocy she took it into her head to say would be official US policy — just like him.

For now I agree. As bad as Biden is he at least pushes back or pulls against the leash those trying to run the Admin control. Harris would be a disaster.

Yes, getting rid of Joe makes no sense until Speaker Pelosi is replaced. Then you can safely get rid of Biden and Harris.

There will be a removal of Joe. CIA will take care of that with a good ole False Flag like Jan 6.

“Joe Biden is sadly unbelievable. I mean that no one can believe a single word that this man emits from his mouth. He is untrustworthy…”

All of this was true before the dementia kicked in, now that his mind is rapidly failing he is a danger to the United States and the world.

The answers Biden gave to questions at today’s press conference were, in fact, directly off the sheet. We understand that and the insane back story. So the actual regime change that’s needed is here, in our country.

Joe Biden is pathetic, apparently unable to remember even the most uncomplicated, most straightforward talking points without help. But here we are, stuck with him unless and until the Democrats decide that he is dragging them all down, and like Putin, he must be done away with.

So the question, of course, is: what then?

In next week’s episode, hilarity ensures when Charlie McCarthy goes on strike because Edgar signed their agency contract without consulting him!

Where are all the leftist generals, admirals, and intelligence professionals who said Trump would start WW3 and that the Hunter Biden laptop was fake now?!! Where is General Hayden?! Why hasn’t he spoken out regarding Biden’s dangerous statements and trainwreck of a foreign policy. Why has General Hayden sat on his hands after the Afghan debacle, after the “minor incursion” gaffe, and after all these gaffes? Every general, admiral, and intelligence professional who spoke out earlier, are cowards now, especially General Hayden.

The scandal here that what Biden was holding in his hand was not notes, but specific answers to specific questions that had been pre-planned and rehearsed. That is fraud plain and simple. Biden is so mentally impaired and incompetent that he has to cheat in order to give the appearance that he can talk and think.

Would someone please put this POS back in his basement?!?! He’s screwed OUR country into the ground, now he’s going for the rest of the globe.

Because of his dementia, Joe honestly doesn’t remember any of his gaffes.