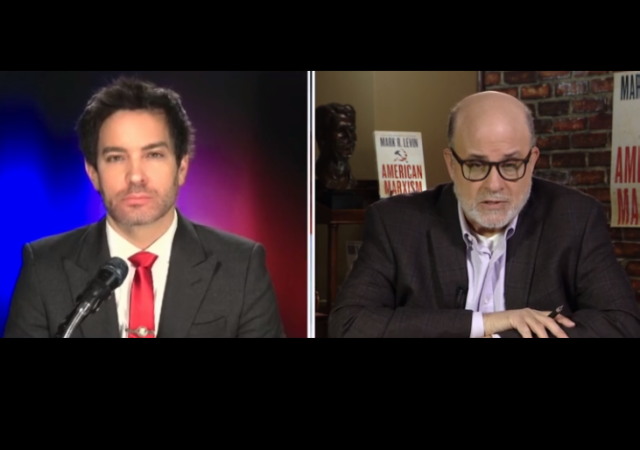 Brandon Straka, the founder of the #WalkAway movement, which encourages people to walk away from the left, did an interview with Mark Levin this week, which was very revealing.

Straka tells his full story of January 6th and what he has been through since then.

Straka accepts responsibility for being there but makes it clear that he never entered the Capitol Building. He shares video he shot showing the crowd on the east side of the building while pointing out that the actions seized upon by the media were occurring on the west side of the building.

It was only later, when the media started covering the story, that he learned what was happening on the other side.

Two weeks later, an FBI SWAT team showed up at his home and arrested him.

The Blaze has more details:

In Mark Levin’s exclusive, “Brandon Straka’s January 6 Story Reveal,’ Brandon had the floor not only to provide Americans with the details and video evidence of what happened but to reveal what followed his arrest. Mark Levin pulled no punches and encouraged Straka to tell his story by asking direct and hard-hitting questions. Brandon delivered on every question, bringing to light what Mark describes as the “injustice in our courts.” Brandon explained:

He went on to say that the prosecution’s initial recommendation was severe surveillance measures as a condition of the three-year probation, which would have allowed for surveilling of his phone, computer, bank accounts, social media accounts, and email accounts for the entire probationary period. This was ultimately not included in the final sentencing, but it begs the question of why it was brought to the table at all.

The interview is a little over an hour long, and I recommend watching the whole thing:

Straka is one of many people in this situation. I have a feeling we will look back on the treatment of these folks as a very dark chapter in our history.

That’s the intent. The purpose of this insanity is to send a clear message to the right, especially those who support President Trump, to SHUT UP.

You seem to think that the treatment of these people has been particularly harsh, its not been. That’s the system the left and many minorities have been bemoaning for decades.

On the events of January 6 2021 Julie Kelly’s book is a good read. What the government has done to really peaceful protesters is criminal especially when compared to the destructive protesters who got off free.

The entire country has seen the BS that is “the left”, and they know everything is a farce.
Watch as they blunder us into WW III

So. how much further has he walked away by now?
Relevant meme.