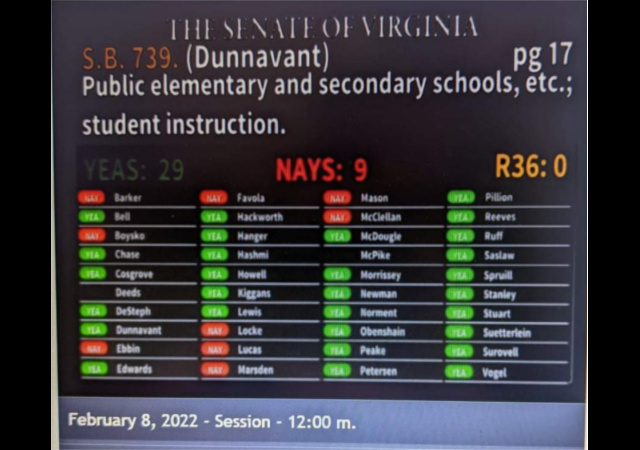 When one domino falls the others tend to follow. Thank you, Democratic Colorado Gov. Jared Polis.

Virginia Gov. Glenn Youngkin faced backlash from the left and mainstream media when he ordered schools to make masks optional for students. The liberal school districts lost their minds, asking judges to overturn it.

But Youngkin had one Virginia senator in his corner: Chap Petersen from Fairfax City. Petersen was iffy about mask mandates in schools so he supported Youngkin’s idea.

The SB 739 bill requires schools to teach in person. Petersen added a bipartisan amendment that allows parents to choose to unmask their children.

The amendment was approved by a bipartisan vote of 39-9. pic.twitter.com/7hn17tLDy7

Ten of the state’s 21 Democrats supported the amendment.

The Fairfax County Parents Association tweeted that the news of the bill passing panicked the FCPS school board.

Early reports are that the news today has FCPS school board members in a panic.

As a reminder, the failure of local leaders & school boards to take any action whatsoever to develop mask offramps is one of the main impetuses behind these legislative developments. pic.twitter.com/rwmjp2jB67

More critically, the decision to wear a mask in public – when there is so little correlation with public health – makes it de facto a political decision. In other words, by wearing a mask in a public setting, the wearer is able to communicate a political message, e.g. “I Care About Others” or “I voted for Biden” or even “I’m Vaccinated.” The ability to communicate a political message is the essence of our First Amendment, but coercing others into adopting that statement, especially a student in a public school, is the exact opposite…

Even though Petersen supported Youngkin’s order he wanted to do it through legislation: “We needed to solve this ourselves. And we will. I don’t like executive orders…We needed to act to end the mask wars.”

What a shock, though, that other Democrats joined Petersen. That’s sarcasm because Democrats know the majority of people are sick of mandates. It’s why Democrat governors decided to end mask mandates. Illinois Gov. Pritzker and New York Gov. Kath Hochul are weighing their options.

Of course, they all base their decisions on the science and falling COVID cases.

Once again. We’ve been living mask-free in Oklahoma since last year and doing just fine.

Science my bootie. They all know citizens are turning against them and their stupid power grabs, especially when it comes to their children.

To politicians, it was never about the science. It was all about politics.

“The Science has changed.”

Bull. The polls came out, and they must have been absolutely terrifying for the Dems who have been pushing and shoving for lockdowns and mask laws and vaccine passports etc… One thing for absolute certain: When the Republicans wind up back in charge, they need consistent messaging as well as a message other than “We’re not them.”

The “science,” in this instance, is poli sci: “You can’t exercise power if you’re not in power.”

That’s the science that has changed.

This is good and actually how things should be…with the legislative bodies passing legislation like they are supposed to do.

Now watch all the cards come tumbling down today as Democrat after Democrat says “your welcome” for saving everyones lives and letting people look at others legally again.

Still doesnt change the simple fact that the fucking fucks need to be royally fucked hard like they absolutely deserve to be!!

First, red states (really all states but Dems will never do it) need to enact legislation to curtail the overly-broad powers of these various “emergency” statutes that were invoked. Limit the scope and duration, with extensions requiring supermajority legislative approval. Second, a tribunal – try them all for crimes against humanity. Start with Fauci and all the way down to school boards, local “health officials” and misguided cops who were “following orders”.

The dems only did it because their poll numbers are as bad as EFF joe biden*. Their sheeple base will do an about face and mouth what they’re told to mouth.

This reminds me of the General in Full Metal Jacket extorting Joker to “hop on the team for the big win”. The election is coming and the smarter Democrats are trying to put as much distance as possible between themselves and policies which the outright supported, or didn’t speak up against. Kudos to Rep. Petersen who was one of the few to call this out as being wrong for a while.

There are very few people whose opinion I care about LESS than that moron.

He’s trying to jump on this crap years later after screaming and railing against Trump for 4 years.

He’s only marginally better than Kristol and the Kruise Ship Krew.

Wearing a mask communicates “I’m vaccinated”? I hope that isn’t what any vaccinated mask wearer is intending to communicate, because it destroys (as if more was needed) the case for their cherished vaccines.

My tinfoil hat is whispering in my ear that perhaps the reason the legislature did this is:
1) Legislation overrides EOs.
2) Although (from 20,000 feet) the legislation looks to be the same as the EO, if you examine the fine print, perhaps you will find some added leverage for Democrats that wasn’t contained in the original EO.

No better time to remember the old saying:
“Fool me once, shame on you. Fool me twice, shame on me.”
The next power grab by the progs must be met by a stone cold NO and pitchforks in the street outside their homes and offices.
Don’t give up personal freedoms next time. The progressive left will be trotting out another excuse for an executive power grab “for our own good”, “For just a couple weeks to flatten the curve” etc. Don’t believe them. Progressives always lie to gain power but we need to refuse to hand it to them.

This is literally the definition of doing nothing and claiming credit for it.

Masks have always been optional since their invention many years ago.