However, if you’re in Los Angeles, you will still need to mask up…because reasons. 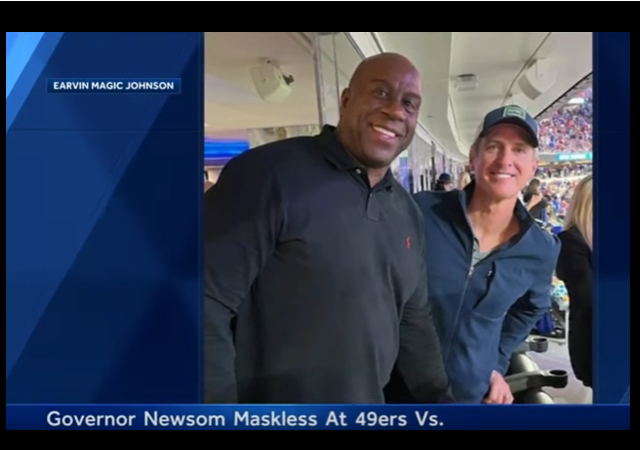 California can now be added to the list, with a proviso. The mask mandates will end next week…but only indoors and for vaccinated people.

Citing a 65% drop in Covid-19 cases since the peak of the Omicron surge, California will end its statewide indoor mask mandate for vaccinated individuals next week, nearly two years after it was first implemented, Gov. Gavin Newsom announced on Monday.

“On February 15, California’s statewide indoor mask requirement will expire. Unvaccinated people must still wear masks in indoor public settings,” he said. Less than 20% of the state’s population remain unvaccinated, according to data from the state health department.

Despite the governor’s order, local public health officials have the authority to grind away at their citizens with continued restrictions and mandates.

Temporary requirements that visitors to nursing homes or other long-term care facilities show proof of vaccination and a booster shot, in addition to a negative test result, would be allowed to expire, officials said.

“Omicron has loosened its hold on California, vaccines for children under 5 are around the corner, and access to Covid-19 treatments is improving,” said Dr. Tomás J. Aragón, the director of California’s Department of Public Health.

Local public health officials still have the authority to keep restrictions in place that are tougher than the state ones.

Here is an example of some of the city-specific insanity.

Berkeley on Monday began requiring workers at restaurants, gyms and childcare facilities to receive a booster shot if they’re eligible. The city is also requiring all patrons age 5 and older to show proof of full vaccination to eat at indoor restaurants and enter indoor theaters.

San Francisco, however, has tweaked its requirements. The city partially softened its vaccination verification rule last week to allow certain indoor businesses to permit unvaccinated customers to enter if they cite religious beliefs or a qualifying medical reason. But they must show a recent negative coronavirus test — administered by a test provider and showing the person’s name — to enter.

For vaccinated San Francisco customers who don’t want to bother with getting a recent negative test, booster shots will now be required for entrance to certain locales for those who are eligible. San Jose made a similar adjustment Friday for indoor events of 50 or more people at city-owned sites.

And it appears the mask mandate will remain in Los Angeles County.

The state is allowing counties to drop their mask mandates on that day if they want to.

Orange County WILL be dropping the mask mandate on Feb. 15th.

As a reminder: San Francisco now has opened a “linkage center” that allows people to openly shoot-up narcotics there. That, I think, shows you exactly where public health lies on their list of priorities.

And the school mask mandate is still in place for the time being. Perhaps more high schools will decide to take the approach that Oakdale High School took?

Why would I want to go to Los Angeles?

It is the end or Route 66. That was kinda interesting. Of course there was a guy with a needle in his arm, about 50 yards from that famous sign.. (my one day in LA)

I’m still shaken by the evidence videos I’ve been seeing that support the thesis that every COVID vaccination you are subjected to permanently destroys a significant portion of your overall immune system.

Not surprising. Remember, the old school vaccines were comprised of attenuated versions of the natural pathogen (virus), which induced a natural immune response to the natural virus. These new mRNA vaccines are genetically engineered “Frankenstein” constructs that target certain attributes of a virus in an attempt to manipulate the natural immune system. You shouldn’t fool with mother nature, or be surprised that when you do bad things happen.

Or the supposed autopsies showing whole-body autoimmune damage, not just the heart.

Texas with no mandates vs. California with mandates.

(Case reports are lower in Texas because there is wider resistance to testing and reporting. Dead bodies are hard to hide.)

Changes nothing. These people are entrenched so deep there is no getting rid of them.

I guess Newsom doesn’t remember Fauci’s claim that you could catch AIDS from somebody just by sharing the same zip code.

No mask… but to eat in a restaurant you’ll still have to show your voter id vaxx card, right?

same issue in Wa. Some counties are asking for papers to eat in a restaurant. Still required for large events… even though vaccine does nothing to stop the spread. It’s all about being vindictive to those who won’t bend the knee.

So, if you identify as vaccinated then you can breathe freely again. Unless you’re a kid.

Yes, not immune, not sterilizing inoculations, but rather a convention of therapeutic vaccine(s).

So, if you identify as vaccinated then you can breathe freely again

So now the masks are being used to identify the unclean. Bizarrely, the supposedly protected (vaccinated) must still be protected from the unclean.

The covaxers, particularly covax-20, 21, and 22, are known silent spreaders. And the maskers (e.g. petri dish effect, viral collectors) are known to have a binary effect at best and contribute to progressive community contagion at worst, thereby increasing infections in the community in darkness. Follow the science, not the cargo cult, empathetic appeal, and viable legal indemnity.

I don’t quite understand what changes. There was California mask mandate; but sane counties ignored / didn’t enforce it. From Orange in the South to Placer in the middle to Shasta in the North – there were no masks in sight.
Now State will *stop* mandate, but insane counties like Los Angeles will still require it.
So – what’s different? I honestly don’t understand!

This clown think businesses will be checking patrons “papers”?