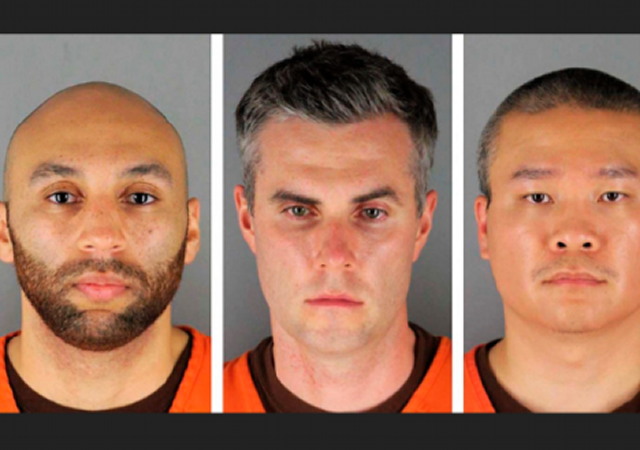 The legal fallout of the George Floyd case in Minneapolis continues as three of the former police officers involved have now been charged with violating Floyd’s civil rights.

We covered the case of former officer Derek Chauvin extensively. See all of our Floyd related coverage here.

Three former Minneapolis police officers were convicted Thursday of violating George Floyd’s civil rights, as a federal jury rejected their arguments that inexperience, improper training or the distraction of shouting bystanders excused them from failing to prevent Floyd’s killing.

Tou Thao, J. Alexander Kueng and Thomas Lane were convicted of depriving Floyd of his right to medical care as the 46-year-old Black man was pinned under fellow Officer Derek Chauvin’s knee for 9 1/2 minutes while handcuffed, facedown on the street on May 25, 2020. Kueng knelt on Floyd’s back, Lane held his legs and Thao kept bystanders back.

Thao and Kueng were also convicted of failing to intervene to stop Chauvin in the videotaped killing that sparked protests in Minneapolis and around the globe as part of a reckoning over racial injustice.

Floyd’s brother Philonise Floyd called the verdicts “accountability,” but added: “There can never be justice because I can never get George back.”

And Floyd’s nephew Brandon Williams said he hoped the verdicts would change laws and policies to “protect people from these situations.” He also said the outcome “sends a message that says, if you murder or use excessive or deadly force, there’s consequences that follow.”

Some people are calling the decision unfair.

This is injustice. Finding guilt for Chauviun is one thing, but the other officers actually did express concern for Floyd and were overruled by a senior officer.

This is a media conviction. https://t.co/KPRGTyGnw6

Newsmax has more on this and notes that the prosecution played the video of Floyd’s arrest repeatedly in response to the defense:

All three testified in their own defense. Each acknowledged they knew they had a duty of care to people in their custody. But they and their lawyers told jurors they did not realize at the time that Floyd was in dire need of medical aid or that Chauvin’s use of force was excessive and so they could not have been acting with deliberate indifference.

To rebuff this, prosecutors repeatedly played videos showing Floyd’s distress was plain to bystanders, including children and an off-duty firefighter, who shouted that Floyd was passing out and begging the police to check his pulse.

The three defendants all described deferring to the authority of Chauvin, the most senior officer at the scene with 19 years at the Minneapolis Police Department. They said they assumed he must know what he was doing.

Three former Minneapolis police officers were convicted by a federal jury today of depriving George Floyd of his civil rights. This verdict won’t bring George Floyd back, but it moves our state closer to being a more just and safe place for all Minnesotans.

Junkie George is the new Jesus. Oops – Alexandra Cortez is!

YOU SAID IT BRO.

The Ahmaud Arbery “hate crime” verdict was absurd too. If you read the motions in limine, the bulk of the government’s evidence was social meida comments from five years before the shooting.

My research of the applicable case law indicated that the government was required to prove beyond a reasonable doubt that racial animus was a GREATER motiving factor than catching him in the act of another burglary and that the McMichael’s and Bryant possesed the SPECIFIC INTENT to interfere with a protected right. The government prodcued no evidence of any of that.

On a semi related note, the Professor would be a great guest on Rekieta Law. Andrew Branca has already found a home there.

Saint George DIED while in custody from an overdose of all the fentanyl he crammed up his butt to get high that day.

Yet, the lies continue.

Those guys were just trainees, and at least one of them was just trying to keep bystanders from interfering. If any of them had told Chauvin what to do, he would have told them to “Shut the f**** up!!”

Yes, while the officers had plausible, but improbable roles, and the mob assembled prevented access by authorized medical personnel, Floyd self-aborted through a Fentanyl-induced progressive condition. A progressive condition that prompted a premature exit from the police car, and ultimately suffocated him by his Choice. There is no evidence that diversity [dogma] (e.g. racism) could be implicated, other than the mob that took a special and peculiar stand and blockade.

Same kind of b.s. that resulted in the completely incorrect Chauvin conviction.

Let’s paraphrase a recruit’s first day, “Welcome to the Minneapolis Police Department, I’d like to introduce you to Officer Chauvin, your Field Training Officer, he has decades of valuable experience which he will pass on to you, failure to understand and implement his teaching can result in termination…”

However, I do agree with Governor Walz, these convictions appear to be a helpful step toward making Minnesota “a more just and safe place for all Minnesotans,” sometimes you’ve gotta hit rock bottom before you can recover.

That Walz and Keith Ellison haven’t been Impeached and removed from office is a clear sign the people can’t even see rock-bottom yet.

We have hit rock bottom: Joy Behar can’t go to Italy because of a war:

The same company that fired Gina Carano will have nothing to say about this outrageous comment.

Hard to believe that a dopehead like Floyd could be become a hero.

He became far more valuable to the leftilibtards dead than he ever would have been alive.

If we’re lucky to have liberty-minded people inhabiting this nation a 100-years from, they’ll refer to this period as the era of ‘Show Trial Jurisprudence.’

George Floyd killed himself. He ingested enough fentanyl to kill an adult horse.

Imagine if he didn’t die? He’d be making Nike ads.

I see drug overdoses mean nothing and nothing was learned, but if you M-F’s, if you don’t convict we will burn you M-F’s to the ground!

This should serve as an eye opener. Anyone who is still willing to be a police officer in the state of Minnesota has rocks in their head.

Officers in Minnesota should start liquidating assets asap. and just in case, place them where Minnesota’s kangaroo courts cannot reach them.

Show trials in US and soon in Canada. “Jury of one’s peers” is a joke. Any cop working in Minnesota is just skating on thin ice.

All police should get the hell out of cities, take their families where they will be safe. Some years ago I had a discussion with a small town police chief. He bailed out of a big city. Made less money, but was in a much better environment.

Minnesota use to be a great state with middle class values all over.
They started bringing in Muslims by the thousands 30 years ago and Cambodians. Pretty sure the Cambodians are not the problem

Just curious about selective prosecution; has a person of color ever been tried for depriving a caucasian of his civil rights?

I don’t think that is legally possible in a Leftist state.

You sign off with the message “Subotai Bahadur”, but I think it goes underappreciated.

I am not advocating collective punishing all blacks just because so many are criminals, I am advocating taking away all unearned perks, starting with killing Affirmative Action. Bald faced racist groups do not deserve the perks.

How many open slots in MPD? Pretty sure there will be a bunch more over the next few months.

The people of Minneapolis and St. Paul will, hopefully, pay for this in blood.

Just in passing, a week or two ago I saw some news from Seattle. It seems that they have lost so many cops from quitting and with basically no new ones applying, that they were short handed. As in they are supposed to have roughly 250 cops actually on the streets per shift. And even after moving every cop they could out of desk jobs and onto the street, they could only get 47 per shift doing what cops do.

I wonder what the equivalent figures are for Minneapolis? And what their recruitment rate is?

I happened to be in Minneapolis a couple of weeks after the George Floyd riots there. Plane flew into there, and my son picked us up. We went to a few specialty stores not available in Iowa where our son lived at the time, and then to lunch so we got a little bit of looking around. There were a lot of burnt out stores. And at a number of stores that were not burnt out, there were work crews bricking up store windows. Not a good sign.

George Fentaloyd strikes again. He ODs and dies on your doorstep and YOU go to jail.