It’s time to end all restrictions. 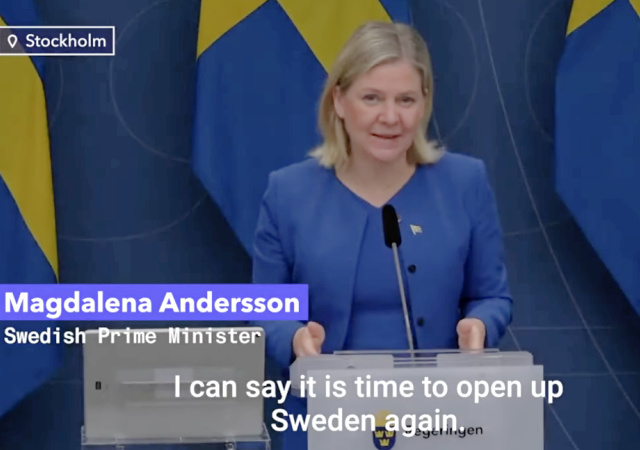 Sweden and some German states have joined other European countries to lift most COVID restrictions as people’s anger starts to spill on the streets.

Swedish Prime Minister Magdalena Andersson said, “The pandemic is not over, but we are entering a whole new phase…knowledge has improved…several studies show that Omicron leads to less severe disease.”

Sweden ended widespread and costly COVID-19 testing even in younger people who have symptoms of the virus:

The move puts the Scandinavian nation at odds with most of Europe, but some experts say it could become the norm as costly testing yields fewer benefits with the easily transmissible but milder omicron variant and as governments begin to consider treating COVID-19 like they do other endemic illnesses.

“We have reached a point where the cost and relevance of the testing is no longer justifiable.” Swedish Public Health Agency chief Karin Tegmark Wisell told the national broadcast SVT this week.

“If we were to have extensive testing adapted to everyone who has COVID-19, that would mean half a billion kronor a week (about $55 million) and 2 billion a month ($220 million),” Tegmark Wisell added.

Healthcare workers, the elderly, and the vulnerable can get free PCR testing if they have symptoms.

Others with symptoms will have to stay home.

Sweden did not have a massive lockdown or forced businesses to close. The country had some restrictions but has lifted most:

Several German states have decided to lift or ease some COVID restrictions as the government fiddles its thumbs:

Though case numbers are at a record level, Germany is recording relatively few Covid deaths and stable hospitalization rates. On Tuesday, the head of Germany’s hospital association, Gerald Gass, said he believed the health system would not be overburdened in the coming weeks.

Other states that have eased some restrictions, whether curfews or rules for shopping or restaurants, are Bavaria, Berlin, Brandenburg, Hesse and Rheinland-Pfalz. Masks will continue to be obligatory in stores and indoor public spaces.

German Health Minister Karl Lauterbach thinks the government will ease the restrictions before Easter. He warned states from doing so too soon.

Lauterbach claimed to do so is “pouring oil on the fire.” Okay, whatever.

By golly I believe a trend is forming!

Does everyone have elections this fall?

Be sure, we will have the marxist party’s mid-term election varient in the next week or two.

They will have solved the coof. LOL.

This grift is so stupid I am not sure how anyone believes it.

Growing contrast between areas governed by leaders who are realistic re Rona and those who are wedded to timidity and the politics of fear; which just so happens to maintain their emergency powers……

Anyone else glad to see how wrong Republicans are to always attack Sweden?

Buzz off marxist. Where are the attacks?

My wife and I have been relatively unmolested by this Covid insanity here in Sweden. We will not have to wait outside the pharmacy in a spaced line and there will be four more seats available on the buses and trams as the drivers & front few seats were partitioned off with a length of yellow plastic caution tape. The dropping of the vaccine passports was neither here nor there for us because if there was something that we really wanted to do or see we could always get a validated negative Covid test certificate. We all hope this non-sense is over. It blows my mind to see what is going on back home in the USA.

From almost the very beginning of the scam, Sweden was a breath of fresh air amid the insanity in the world.

The Swedes simply applied the knowledge we have of airborne virus, extensive knowledge and experience. They resisted the cries of the fascists.