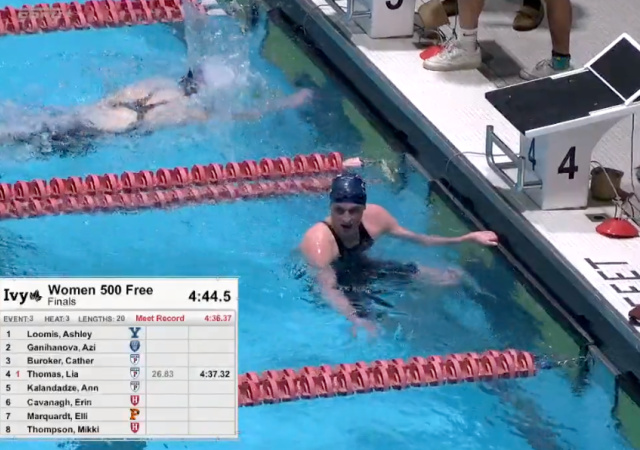 Lia Thomas, the transgender swimmer from the University of Pennsylvania, has just broken another record, igniting another round of controversy and uproar.

Thomas was a mediocre athlete when competing in men’s sports, but has found success in competing against women. Why are biological women putting up with this?

One night after posting the fastest split in the 800-yard freestyle relay, the University of Pennsylvania’s Lia Thomas captured her first individual title at the Ivy League Women’s Swimming and Diving Championships. Thomas, a transgender woman, produced a winning time of 4:37.32, which was more than seven seconds quicker than the 4:44.83 clocked by teammate Catherine Buroker for second place.

A three-year member of Penn’s men’s team, Thomas transitioned to female during the COVID-19 pandemic and is in her first season as a member of the women’s team. Her performance at the Ivy League Champs established a Blodgett Pool record, breaking the mark of Olympian Kate Ziegler, and just missed the meet record of 4:36.37, set in 2020 by Ellie Marquardt of Princeton. Marquardt was third on Thursday night in 4:46.63.

Swimmer Catherine Buroker, who placed second, is being called the real winner by some.

Penn swimmer Lia Thomas won the 500-yard freestyle race at the Ivy League championships on Thursday night, February 17, swimming neck to neck with her competitors for the first part of the race. Thomas took a lead around the halfway mark and finished in 4 minutes, 37.32 seconds.

Penn sophomore Catherine Buroker was in second place and posted a time of 4:44.83, which is a seasonal best. Social media, however, has hailed Buroker as the ‘true’ winner, a belief that has stemmed from a lot of controversies that have surrounded transgender swimmer Thomas in recent times. Thomas, 22, is a swimmer at the University of Pennsylvania who has been shattering women’s records at the school. Thomas competed for three years at Penn as a man, Will Thomas, before the transition…

Owing to all the controversy that Thomas has been in the midst of, social media has dubbed Buroker as the actual champion. “Catherine Buroker had the fastest time for a biological female and should be the IVY Champion in the 500 free. @pennathletics decision to allow Thomas to compete in the Ivy Championships is a clear message to Catherine and her biological teammates that they don’t matter,” one user wrote.

Today Catherine Buroker after years of hard work and dedication won the women’s 500free Ivy League championship
Unfortunately her accomplishment was stolen be a man who claims to be a woman despite being a part of @PennSwimDive as a male swimmer just 3 yrs ago #SaveWomensSports https://t.co/YsraDgYINS

Congratulations to Catherine Buroker on her first place finish https://t.co/lrJg0JV66s

Congrats to Catherine Buroker for being the fastest woman in the competition! https://t.co/TwdbQ5Yg5k

Wait until they see how good men are at women's hockey, women's basketball, women's weightlifting, and women's boxing. Absolutely dominant.

Congratulations Catherine, the woman who won the race.

So Lia couldn't compete with the men, and chose to take wins and records from biological women. Unreal.
Catherine won. Not Lia.

This sums it up…

If you were to tell the truth about what you can see with your own eyes here you would be banned by Twitter… https://t.co/Tjdgjf8sgw

Don’t care. No organized boycotts from the women. Nobody wants to put their names on a story. I will not stand up for people who won’t stand up for themselves. Go and hide. Watch your sport be destroyed.

The Era of Cowardice. I see it everywhere and I despise it. https://t.co/hwWDIc3ZIK

A chick with a dick. Whatever happened after the female Penn swimmers complained about this freak showing his junk in the locker room? All Penn alumni should withhold their contributions. Hurt ’em where it hurts …. on the balance sheet.

It’s darkly hilarious how the democrat media is trashing a BRILLIANT 15 year old Russian skater for cheating after failing a rather sketchy drug test, but cheering when a goofball transvestite like this asshole cheats in swimming events.

I’m so sick of this shit. I don’t care what you ‘identify’ as. What are your chromosones? XX compete vs XX and XY compete vs XY. Case closed.

Speaking of also-rans & outright frauds whatever happened to Kaepernick? After his idiotic “Just Do It” Nike® ad campaign he seems to have fallen off the planet and is nowhere to be seen.

This is life imitating ridiculous art, and its apparent we’re at the end of the line in our country.

From Seinfeld: Kramer Dominates the Dojo:

Of course he did. What would have been the point otherwise? He could have continued to swim on the men’s team.

The tweet from Jesse Kelly is 100% right.
If you won’t stand up for yourselves, no one else should.

If this is what the sporting world wants, be my guest. I’ve already ditched pro and college sports for political BS. I’ve found better things to enrich my life.

If you watch the process, the sane people are playing defense – always ends in a loss for us. The people who are deliberately destroying women’s swimming should be immediately fired. This includes the administrators, regents (or whatever they are here), and any government officials. Make THEM play defense.

We have ourselves to blame. Look who we’ve been electing:

A female mammal must have ovaries and a uterus. Men might have their external anatomy changed to resemble a female, but they can never produce ova or carry a fetus. To tell boys they can become girls or vice versa is simply a lie. They can be transvestites, but never actually transsexual.

In athletics, there should be two categories:
1. Females with XX chromosomes and ovaries.
2. Open, including both men and men who think they are women.

2. Open, including both men and men who think they are women.

Actually, the men’s leagues ARE the open leagues. Except for a very few sports (wrestling, etc) women who are actually able to compete with men are allowed to play with the men. But the fact is that pretty much no women can compete with men in any sports (save drag racing). But the men’s leagues have always been “open”. The women’s leagues are the only ones that really restrict competition because they are not the best in their sport. The general edge that men have over women (in just about every sport) is between 10 and 15%, which is the difference between world class and high school.

I think there should be 3 categories, male, female, and other.

Way to go DUDE! You definitely EARNED your record with San asterisk.

She broke a record for transgenders—-that is all.

There should be three teams.

No such thing as transgender.
Give no ground.

For my own reasons, I will not participate in a man’s delusion that somehow remakes biology and, abracadabra, he’s female. Dosen’t happen! I cannot call an obvious man a woman.

I have granddaughters, my daughter played D1 basketball

She never would have earned a scholarship playing against trans

Where the heck are they?

My youngest daughter just graduated last year and played at a Div I school. Student-Athletes who disagree with what’s happening – and it’s not a small percentage – are simply terrified of saying anything because of the atmosphere on campus. Dissent is not tolerated. You offer even the most gentle criticism of the policy and you’re labeled a homophobe which makes you persona non grata, not just at your school but at every school.

College today is a horrible, frightening experience for anyone who wants to think for themselves.

A truly great non-accomplishment that deserve to be surrounded by asterisks.

Kidding of course, no male, sex change or not should be allowed anywhere near woman’s sports

If you want a faster, stronger, smarter woman, she was born with a penis.

I am of the opinion that if a man wants to pretend to be a woman and participate in women’s athletics then they should be required to undergo a complete sex change operation and at least a years worth of intensive female hormone supplementation before being allowed to participate in said women’t sports and no more of this suddenly becoming a trans-woman overnight. They either put their money where their testicles used to be or they not be permitted to immediately participate in women’s sports.

I can’t help but wonder why any biological woman would even bother to compete against Lia Thomas. They should simply refuse to participate in such a travesty and let him swim by himself.

They still end up with a physical advantage because of the muscle mass they put on over puberty.

They should wear transparent bathing suits so we can check. Ugh!

Don’t care. No organized boycotts from the women. Nobody wants to put their names on a story. I will not stand up for people who won’t stand up for themselves. Go and hide. Watch your sport be destroyed.

Jesse Kelly’s statement – while true – overlooks a major problem. Thirty or even twenty years ago feminists (and their fellow travelers in academia, Hollywood, Congress and the Joseph Goebbels media) would never have tolerated a male trying to fake his way into women’s sports. Feminism – at one time arguably Washington DC’s meanest and dirtiest political lobby – has almost no mojo left.

What happened? Are the DIDs (Dudes In Dresses) really that powerful, or was feminism really that weak all along? Even the black supremacists -masquerading as “civil rights” groups – did not wilt the way feminists have done.

The horizons of modern feminism has so shrunk that now they encompass only a woman’s vagina and her supposed right to reduce her unborn baby to a bloody pile of lifeless body parts. They no longer even pretend to defend the rights of all women. Feminism today is of interest only to neurotic women who actually believe we are living in a real-life 24/7 version of A Handmaiden’s Tale.

You guys and gals do know, of course, that I would have broken all of the women’s Winter Olympic records in every single event this year but for my boycotting them in view of the Uyghur genocide and the Wuhan virus.

I’m disappointed in the extreme that few, if any, other athletes boycotted these Olympics.

I’m with Jesse Kelly. I really don’t give a tinkers dam about women’s sports, and heck, while I think soccer is about as exciting as watching paint dry, I would pay to see a high school boys team kick the living shit out of the USA wymmins soccer team.

Here’s the deal. If the girls won’t stand up and call bullshit I’m sure as hell not getting off the couch.