Hamas “views with great appreciation and respect the efforts of Amnesty International.” 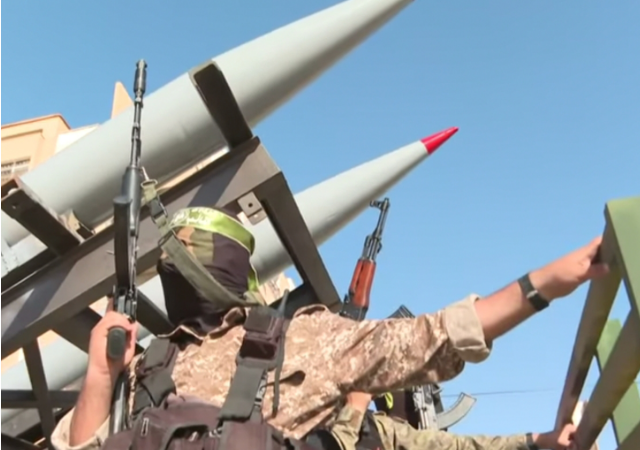 Palestinian terrorists groups have welcomed Amnesty International’s new report on Israel which accused the only democracy in the Middle East of being an “apartheid state.”

The Islamic terror organization Hamas, the terrorist group Popular Front for the Liberation of Palestine (PFLP), and the Palestinian Islamic Jihad (PIJ) praised Amnesty International for compiling the report replete with antisemitic tropes and lies regularly propagated by their own propaganda outlets.

In its statement, Gaza-based jihadist group Hamas’s ‘media department’ declared that it “views with great appreciation and respect the efforts of Amnesty” for putting “the facts in perspective.”

Hailing Amnesty International, the Marxist terrorist group PFLP called for using the report to hold a “trial of occupation,” a term it uses for the State of Israel, and for “ending [the Jewish] presence in our entire Arab Palestinian land.”

On Tuesday, Amnesty’s UK office released a 280-page document that labeled Israel as a “regime of oppression and domination of the Palestinian population for the benefit of Jewish Israelis.”

The Jerusalem Post reported Palestinian reaction to the report:

“The State of Palestine welcomes the report by Amnesty International on Israel’s apartheid regime and racist policies and practices against the Palestinian people,” the PA Ministry of Foreign Affairs said in a statement published immediately after the controversial report was released. (…)

Ahmed Majdalani, a senior PLO official in Ramallah, praised the report, describing it as “an international testimony and new documentation that qualifies to prosecute Israel for its crimes.” The report “gives an accurate description of the racist and fascist occupation practices and war crimes” against the Palestinians, he said.

The Palestinian People’s Party, formerly the Palestinian Communist Party, said this was the first time that Amnesty International had used the word “apartheid” to describe Israel’s actions and policies. (…)

Hamas praised the report, saying it would contribute to exposing Israel’s practices against the Palestinians.

Hamas “views with great appreciation and respect the efforts of Amnesty International in issuing this professional report,” said Hisham Qassem, head of the “Hamas Media Department.” The report “puts the facts in perspective and describes the tragic reality of our Palestinian people,” he said.

“We do not agree with the report’s characterizations of Israel, and we remain a firm supporter of the state of Israel,” Australian Prime Minister Scott Morrison said.

It is natural that Palestinian and Islamic terrorist groups are overjoyed to see a report by a Western ‘human rights group’ that peddles their decades-old antisemitic lies and propaganda about the Jewish State. They will use the document to seek legitimacy for their terror campaign.

The media watchdog HonestReporting found that in its lengthy report Amnesty “essentially recycled patently false claims.” In a detailed review the watchdog debunked many of its claim and concluded that “the latest one released by Amnesty are inherently biased.”

In other news, the sun once again rose in the East, to the consternation of the international left, who have been demanding that it rise in the West at least every other day for “equity”. I can’t wait to see the hysterical reaction when Israel decides to wipe out Iran’s nuclear facilities once and for all.

I despise how these facisct groups hide behind “benevolent” names, including the venal Anti-Defamation League (ADL).

But then, leftist fascists can never be open about their goals, can they.

At the narco-camp, authorities collected several charred bone fragments consistent with the incineration of victims.:
https://www.breitbart.com/border/2022/02/06/new-cartel-killing-field-found-in-mexican-border-state/

https://unwatch.org/amnesty4hamas/ for an Amnesty International employee allegedly setting up an Arab peace activist to be arrested (he was), tortured, and maybe executed (he was never heard from again) by Hamas terrorists.

More scandalous information here, including AA members who call for the destruction of Israel. https://www.algemeiner.com/2022/02/06/the-people-behind-amnestys-lies/

What’s peculiar that over last 3-4 years (thanks, Trump) Gulf Arabs abandoned this BS and started working with Israel. So, Hamas & Co. see the writing on the wall the money train from Rhiadh is stopping; nobody gives a hoot about them any more. Obviously, they need new fundraising campaigns.
On the second thought, maybe AI is looking for new investments as well? And this is just a business plan for new channels (like, I don’t know – Iran maybe)?