Lincoln Project Senior Advisor had claimed: “This is what Trump has emboldened and what the craven GOP has allowed to fester. This is not only racist/anti-semitic, it’s a partisan declaration.” 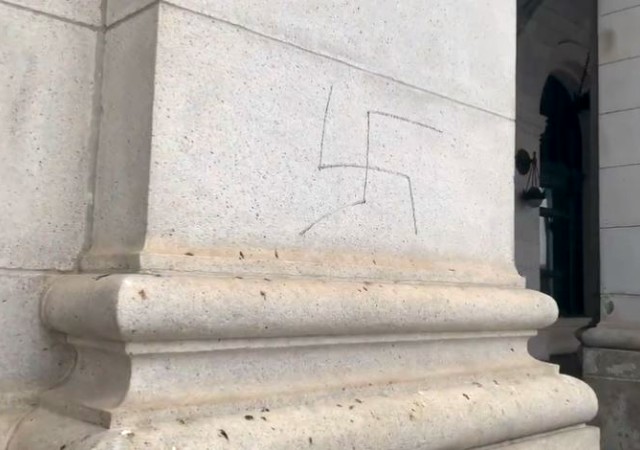 But as per the norm, the reports were used by The Usual Suspects on the left and in the media to suggest that alleged white supremacists supposedly influenced by former President Donald Trump and the Charlottesville tiki-torch racists likely made hateful markings. People found the swastikas a day after International Holocaust Remembrance Day.

The only thing we will regret more than Trumpism letting the antisemitism, racism, bigotry, and misogyny feel empowered is if we as a country don’t do anything about it. https://t.co/Vls2kpj9gP

This is what Trump has emboldened and what the craven GOP has allowed to fester. This is not only racist/anti-semitic, it's a partisan declaration. https://t.co/lvFT4ZaQ4O

We never truly far away from it. None of us. This morning at Union Station, just a short walk from the U.S. Capitol.

I am so sorry to my Jewish friends who have to see this. We are not doing nearly enough to combat antisemitism and white supremacy. https://t.co/Qg6jLTi6P8

For the record, here’s a video from the Daily Caller showing how extensive the vandalism was:

I’m at Union Station right now where someone vandalized the outside the building with swastikas. A team of contractors is currently covering them up. This is just a day after International Holocaust Remembrance Day. pic.twitter.com/2BYS8iDuBp

However, as is often the case, those seeking to cast blame on Republicans and Trump for “white supremacist” anti-Semitism jumped the gun. The suspect has since been identified as Geraldo Pando, 34, a Mexican citizen who has an extensive criminal history per the DC Examiner. He has been treated with kid gloves by ICE over the last year thanks to lax Biden administration policies on illegal immigrants caught committing crimes:

SCOOP: The Mexican man who drew Swastikas on Union Station in Washington, D.C., last week is not eligible for arrest/deportation by ICE under Biden administration standards despite having been previously deported 2x and his LONG (35-page) criminal record https://t.co/gAtyf3K6Og

A man arrested last week for vandalizing Washington’s Union Station with swastika symbols is a Mexican citizen with a 15-year criminal history who has been deported twice but still does not meet Biden administration standards for arrest or removal.

Despite his extensive criminal history and lack of legal status to reside in the U.S., ICE did not pursue taking [Geraldo] Pando into custody following his arrests in Washington last month, an indication of how Biden administration policies have forbidden the law enforcement agency from carrying out laws passed by Congress that give ICE authority to arrest any illegal immigrant, including those without criminal histories.

These new guidelines were imposed in early 2021 and limited arrests to three categories: illegal immigrants viewed as a national security threat, those who illegally entered the U.S. after Nov. 1, 2021, and illegal immigrants who were convicted of select felonies or affiliated with a gang. Anyone outside these categories, including someone who had been newly arrested by a local police department and had previously been convicted of multiple felonies, would not be fit for arrest unless approved by a supervisor.

Bizarrely but not surprisingly, Pando’s name and nationality were not mentioned once in the CNN write-up on his arrest. They identified him as “the 34-year-old.”

Sadly, because the suspect here is like many others who’ve allegedly committed hate crime offenses but did not fit the preferred left-wing/media profile of being a white supremacist Trump supporter – and because this situation is an embarrassment to Joe Biden and other open-borders Democrats, this story will soon go away:

The libs all wanted this to be a MAGA-head or a white nationalist or somebody they could fit into their narrative. But it was an illegal alien from Mexico who's been deported twice and keeps coming back. So now this story will disappear. https://t.co/lxtA1OQgBL

Is he a White Hispanic?

Is anyone keeping a running tally of the number of fake/staged events which were initially widely pushed as a ‘hate crime’? A year over year comparison by State, City and location; at a University campus, in a public transportation system, place of worship, residential area, public school, parochial school or on a street would be interesting to see. Helpful as a tool to pushback on this crap as well.

You will use a lot less paper by making a list of those events that are actual “hate crimes”. As has been noted before, there is a vast shortage of those actual hate crimes, so people have to make them up out of whole cloth.

I read this comment (here, I believe) while the Jussie Smollett situation was unraveling:
“This is what happens when the demand for racism exceeds the supply.”

Yes, Wilfred Reilly – “In writing a book about hate crime hoaxes, I found more than 400”
http://link.law.upenn.edu/portal/Hate-crime-hoax–how-the-left-is-selling-a-fake/4cvzmk2BA5Y/

fakehatecrimes.org. And this one is now #455.

I thought it was just a Buddhist marking out a temple.

This is the rule, not the exception. White supremacists still exist, unfortunately, and sometimes we see them in action, as in the Pittsburgh killer. But they’re in short supply, and vastly outnumbered by other varieties of antisemite, most of whom find a welcome home in the Democrat Party

FBI numbers the KKK at less than 10,000 members with the AVERAGE age of 66 years old. Other “White Supremacist” groups about the same number with the majority already incarcerated.

I don’t know why people don’t like that post, but yes there are a couple of bad people remaining, you will never get a horrible idea down to 0%, there are people who believe the Earth is flat today for gods sake.

It seems to me that these days a swastika is much less likely to mean “I hate Jews” than it is to mean “I want to get some crackers in trouble.”

I had to laugh at that, although every word is true.

Of course it was

Yup. It’s a “partisan declaration” all right, just not of the sort Mr. Timmer presumed.

….when caught they always shift to “My truth” and the vandalism is because Trump is so horrible that he will lead us into more naughty behavior.

Pissing on our legs and saying it’s raining isn’t conducive to unity.

He was just being a good leftist by showing how much he hates Jews. Democrats love such people.

I get some of the angst about Trump, and the man certainly had his flaws, but I don’t get why the left keeps trying the “anti-semitism” line. The guy was sworn in by a freaking Rabbi. His son in law is Jewish. Dude was more pro-Israel/supportive of Zionists than any president has ever been. If there’s one area they should be like “nope, that won’t work” you’d think it’d be anti-semitism.

I mean, I guess it was the attempts to tie him to the alt-right, but my one neighbor who gave some eery alt-right vibes actually hated Trump for his catering to Israel. So, really?

Trump is responsible for climate change, the Black Death, universal entropy, and Original Sin. Drawing a skull and crossbones icon requires much more talent than just writing “Trump.”
Liberals adamantly refused the “Trump Vaccine” until it was baptized by Joe Biden.
Do you understand now?

According to Hamas’s charter, that list would mean Trump must be Jewish 🙂

CBS reporter Bo Erickson noted that the swastikas are “hand-drawn”.

Took a real genius to figure that out. The quality of the drawings are on par with Hunter Biden’s artwork.

What always makes me LOL is when some dumbshit reporter reports “vandalism by American Nazis,” and you look at the swastikas and one of the legs is reversed. You’d think Nazis would be familiar with their own symbol, wouldn’t you?

An honest-to-god Nazi swastika is also rotated 45 degrees, so it sits on the point of an arm, and not on an arm edge.

There are very few exceptions to this in official Nazi regalia.