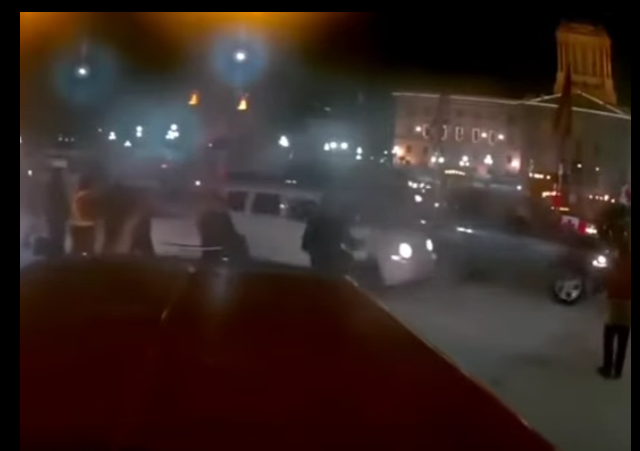 Apparently, there is violence at the Canadian “Freedom Convoy” protests.

However, it is directed at the participants of the convoy.

A 42-year-old Headingley man faces charges of assault with a weapon, dangerous driving and failing to stop at the scene of a serious accident after Winnipeg Police allege he drove his Jeep through a group of Freedom Convoy protesters at the Manitoba Legislature grounds injuring four men.

“(The Jeep) was moving at a pretty decent clip and it’s pretty miraculous that nobody sustained any serious injuries,” said police spokesperson Const. Rob Carver at a media briefing Saturday.

On Friday night at shortly before 10 p.m., a motor vehicle collision occurred near Broadway and Memorial Boulevard. Police said that initial information was that a westbound white Jeep Patriot had driven through the group of protesters.

Protesters have been parked in front of the Legislature since Friday morning as a sign of solidarity for similar protests in Ottawa, Toronto and provincial capitals across the country. Police estimated that around 100 protesters and 40 to 50 vehicles were at the Legislature Friday night with the crowd growing Saturday to several hundred and possibly as high as 500.

What few media reports there are indicate that police apprehended the suspect about an hour after the attack, after he fled the scene at a high rate of speed. The suspect was arrested after a brief struggle.

According to Winnipeg Police Constable Rob Carver, the suspect is being charged with assault with a weapon times four, dangerous operation of a conveyance causing bodily harm times two, dangerous operation of a conveyance, failure to stop after accident knowing that the driver was reckless times two and failing to stop at the scene of an accident times two.

Protests in support of the Trucker for Freedom Convoy are planned throughout the weekend in Winnipeg and several other major cities.

Parallel demonstrations are being held in Ottawa, Toronto, Victoria and elsewhere.

Prior reports by Winnipeg Police Chief Danny Smyth described the protests as cooperative and peaceful.

Law enforcement has reduced traffic on Broadway to one lane where the attack took place.

This is the full statement by @wpgpolice Constable Rob Carver detailing the hit-and-run targetting #FreedomConvoyCanada2022 protestors at 9:10 PM last night near Broadway and Memorial. pic.twitter.com/cWmDR1J4fx

As a result of this incident, Canadian conservatives called out Prime Minister Justin Trudeau for his comments smearing the “Freedom Convoy” protests as racist and “fringe.” The organizers are also calling upon the media its job properly.

Canadian conservative media figures were swift to point out the correlation between Canadian Prime Minister Justin Trudeau’s comments vilifying the “Freedom Convoy” currently taking place in Ottawa, the nation’s capital, and the actions of the driver.

“I don’t know what happened here but hey mainstream media in Winnipeg, this is an opportunity for you to find out what happened and inform us,” independent journalist Rupa Subramanya wrote on Twitter.

“A freedom protester was mowed down by an SUV late last night. Suspect has been arrested. Trudeau vilified these peaceful protests, and now this happens. Shocking,” journalist and host of the “Counter Signal” podcast Keean Bexte wrote.

…“So we have our first incident of violence at at trucker protest. And it’s an attack against the protesters. Did Justin Trudeau’s extremist rhetoric radicalize that terrorist?” Rebel News co-founder and publisher Ezra Levant tweeted.

So we have our first incident of violence at at trucker protest. And it’s an attack against the protesters. Did Justin Trudeau’s extremist rhetoric radicalize that terrorist? What responsibility does Trudeau’s CBC have, for claiming that the protests were organized by Putin? https://t.co/S4RM2e6PJH

Looking at the main news pages of the three major Canadian networks, two of them (one being the CBC) don’t mention it at all and the one that does has it halfway down the page. But all three have plenty of stories to click on about what’s going on in Ottawa.

He will need to sell that vehicle to pay his lawyers, and it will be a long time before he gets his license back.

He’ll probably get a public defender. But Canada being Canada, any jail term won’t be long.

Well, at least for the criminal part he’ll get a public defender.

…and media outlets yawn as fires rage in the cities. Reminds one of Nero.

The MSM isn’t reporting it but the news IS getting out and to a very large audience. There are hundreds of video clips by citizen journalists and I have no problem finding them. My YouTube page is full of them and many of them are excellent.

The battle for the hearts and minds of Canadians has been won by the truckers. It has become personal and truth is widely accessible first hand. Who doesn’t know a trucker?

The big story is how the FBI and DOJ are expanding their anti-Jan 6 protesters network to ensnare the “American Great Honkening” organizers. And so far, who is reporting that? Bigger story and it involves us.

I still believe this will climax in the US, and maybe Europe too, with a Tiananmen Square confrontation. The Chinese didn’t blink. Will we? They didn’t have the freedoms and alternatives that we still have to avert this moments but we need to stop squirming out of realizing the ugly truth behind what is happening and why. If this doesn’t work, all is lost.

Yeah, yeah, second amendment. We are not going to shoot our way out of this and so far, the Canadian police and military have stated their fear that the truckers are armed as a reason to hold back so 2A is important. But once the tanks roll in…. If you don’t believe in God, now would be a good time to start.

I’m betting that saying they’re armed so therefore we can’t confront them is just a rhetorical means for the media to be able to report that the truckers are dangerous people even though they don’t have conclusive proof that there are truckers carrying firearms.

Maybe, but I doubt it. Not with the truckers. But everyone outside of the cities owns guns in Canada. Once these truckers leave the cities, that’s where the LEGAL guns are. Just like in the US. Don’t force the situation where people will rather stand their ground and risk their lives to fight than to accept fascism. So guns matter. But manpower matters more.

The RCMP had to stand down after they arrived to start making arrests. They do not have the manpower. It’s that simple. They do not have enough to establish and secure even a 50-mile blockade. It would be futile to even try. Why get half the population angry and digging in their heels in a pointless exercise? They can’t win and they know it. And besides, the RMCP is probably on the truckers’ side too.

We’ll agree to disagree as to whether everyone outside of the cities owns legal firearms, and I’ll leave it at that.

You have more faith in the RCMP than I. We used to believe that the Aussie police would not turn on their people, and now they are running concentration camps.

Canadians are handling this with a healthy sense of humor. This is like the Tea Party rallies which were more like cookouts and parties than protests. They were fun events. So are these truck rallies. These people are sharing videos and pictures of friendship and partying. Contrast that to videos of looting, vandalism and bodily violence spread by BLM and Antifa? No one standing on police cars or smashing windows in Canada.

Here’s a good one making a sarcastic comment about the mayor.

The government has already lost the hearts and minds. It’s like Jordan Peterson said a few days ago: “Seize the day!” in his cri de coeur to conservatives in government. That is how you win! When you have seized the narrative, you declare victory!

Plus it’s February. It’s not exactly beach weather up there. For example, right now in Ottawa the air temp is 10F and the wind chill makes it feel like -4F.

I lived in Bucksport Me for one year which is north of Montreal and close to Quebec City. It is a winter culture up there. Montreal has a vast underground where people can live and work never having to come out. You have snow banks that top telephone poles and it never stops snowing so the snow plows are going most of time. These truckers are giving them a reason to come out and party. If you think you are sick and tired of the lock downs, imagine how they feel. Cabin fever doesn’t come close to describing it.

Who would have thought a leftie would be violent and deranged? It’s a mystery eh.

Guy is a piece of work:

1) We already know that the Canadian government is ignoring the rule of law and the rights of its citizens since they openly admitted to calling for GoFundMe to steal the money from the Freedom Convoys.
2) Therefore, there is no reason to assume that any other illegal acts that take place against the Freedom Convoys do not happen without the sanction or participation of the Canadian government.
3) Therefore, one cannot rule out that the Winnipeg attacker is not a government agent or ally. Which means him being actually tried and punished cannot be assumed.

What’s the over/under on the prosecution being dropped or a sweetheart plea deal being struck?

They have to release the obligatory “mentally disturbed” description of him first.

I’m sure it will surprise no one that the driver has been identified as a former punk and left-wing activist with a history of violent confrontations, and sexual assaults on “very young women” (this is code for “was having sex with 14 and 15 year old girls”; due to some vagaries of Canadian law the age of consent was 14 for quite some time).

Everything you need to now to understand the futile actions of the mayor and police being reported. Truckers and protesters are showing lots of discipline in remaining calm. They have legal and medical personnel and strong, rational leadership on the ground who are also highly articulate.

There is only one way for the Canadian establishment to get out of this with credibility: surrender to the demands. End the mandates now. It’s time for the “conservative” leadership on Ottawa to stop acting like Republicans and make those demands in the Parliament. “Seize the day!” already!

“It’s time for the “conservative” leadership on Ottawa to stop acting like Republicans and make those demands in the Parliament. “Seize the day!” already!”
^THIS is what pisses me off more than anything: the utter fecklessness of these cowards to join forces with and stand up with the Convoy Protest with ACTIONS.
They are disgusting.