James Tubbs, who now goes by Hannah, also made horrific comments about the victim. 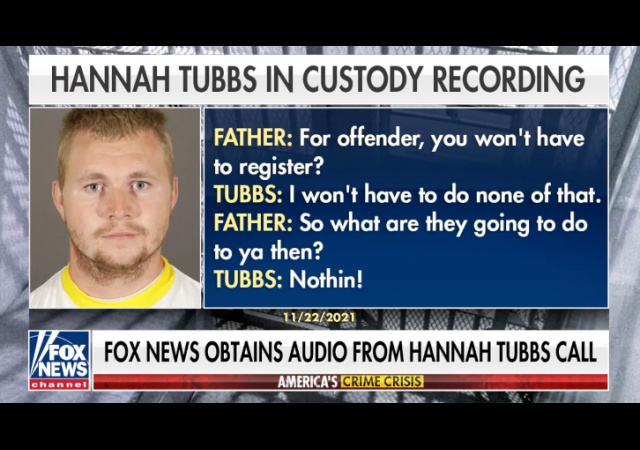 James Tubbs, 26, began identifying as a woman when prosecutors took him into custody for sexually assaulting a 10-year-old girl in 2014 when he was 17.

Tubbs pleaded guilty to molesting the young girl. District Attorney George Gascón refused to prosecute him because he was a minor when he committed the crime. So the case went to juvenile court.

A judge sentenced Tubbs to two years in a juvenile detention center, which is the longest sentence available. Tubbs is in the female part of the center, but authorities keep him isolated from the children.

Now Gascón’s decision has come under more fire because Fox News received recorded phone calls Tubbs has made while serving his sentence.

She boasted that nothing would happen to her after she pleaded guilty due to Democrat District Attorney George Gascon’s policies and laughed that she won’t have to go back to prison or register as a sex offender. She also made explicit remarks about the victim that are unfit to print.

“You won’t have to register?” her father asks on the other line later in the conversation.

“I won’t have to do none of that,” Tubbs replies.

“So what are they going to do to you then?”

“Nothing,” Tubbs answers, then laughs.

Tubbs asked one caller to use female pronouns when talking to him:

“So now they’re going to put me with other trannies that have seen their cases like mine or with one tranny like me that has a case like mine,” Tubbs says. “So when you come to court, make sure you address me as her.”

Then she says that if she goes to prison she’s getting a sex change surgery to go into the women’s facility, and the other person says, “There’s some b—es in there too.”

“The things he did to me and made me do that day was beyond horrible for a ten-year-old girl to have to go through,” she said. “I want him tried as an adult for the crimes he committed against me.”

She said the light sentence was offensive and hurtful and offered her “no true justice.”

“I’ve also heard that my attacker goes by she/them pronouns now,” she added. “I see it also unfair to try him as a woman as well, seeing how he clearly didn’t act like one on January 1st of 2014.”

Gascón had the nerve to call the Tubbs case a learning moment because, you know, a sane person totally thinks it’s okay to prosecute a child molestation crime in juvenile court instead of adult court:

“Like every responsible office, we learn as we go, take feedback from the community, and make necessary adjustments based on our experiences and the complex nature of this work,” he said, adding that “a small number of cases” necessitate flexibility denied to his prosecutors under his edicts.

“Specifically, we learned a lot from the Hannah Tubbs case about the need for a policy safety valve,” Gascon said.

You think? The county only got its hands on Tubbs because his DNA linked him to the cold case. They had his DNA because Tubbs committed several crimes since 2014.

Gascón continued: “Ms. Tubbs had several charges in other counties after the juvenile offense but never received any services which both her past behavior and that subsequent to her arrest demonstrates she clearly needs. After her sentencing in our case, I became aware of extremely troubling statements she made about her case, the resolution of it and the young girl that she harmed.”

I call bull. Again, the county only arrested Tubbs because of DNA from several cases since 2014.

The victim did not get justice. I’m hoping Gascón’s change of heart will help others get justice even though I think he only changed so he could keep his job:

Then on Friday, in a series of five memos sent to staff, Gascon backpedaled on his other directives, saying exceptions could be made to once again bring charges that would carry sentences of life without parole and allow juveniles to be tried in adult court. He will continue to block his office from seeking the death penalty.

Gascon conceded that he’d come to accept his policies were too rigid “after listening to the community, victims and colleagues.”

Tubbs is a sex offender who got away with it this time due to a soft on crime DA. But that’s not the end of it. This type of person is not going to straighten up and fly right. This type of person will go right back out there and commit more sex crimes. And will hurt more people. And will eventually get a very long sentence. And whatever girls get hurt it will be the DA’s fault.

Don’t bet on the long sentence. That assumes a judicial system that opposes child molestation. No evidence of that.

He would benefit from the longest sentence he can request. One he is outside the safety of his custodial environment, harsher justice will find him.

I’m sure the DA is shaking in his boots. Not really, they’re scummier than the actual criminals.

The DA’s are criminals.

But will the authorities keep the rapist isolated from the children as I doubt they will put them in solitary confinement for two years? It would be safer for children if they had put them on a watch list with restraining orders to keep them away from children. However they should have been tried as an adult and jailed based on the safety of other inmates.

Yes, they keep him isolated from the others. And yes, they should have tried him as an adult.

Want to keep other safe from him? Put him in general population.

It’s tough to be a predator when you are focused on not being prey.

In the Peoples’ Democrat Republic of Alta California, being a convicted sex offender is an honor and mark of distinction. Nothing will be done to him or his fellow offenders by the legal system.

I wish I could say you’re wrong. But I can’t.

But can he swim is the question

Normally I’m against government-funded sexual reassignment surgery, but in this case I think some prep work (castration) might be reasonable. No luxuries like anaesthesia, though.

And they might as well do Tubbs while they’re doing Gascon, I suppose.

People in LA County should recall Gascon. The guy is too radical to properly perform his duties.

So their answer is to decided whether the transgender wacko nonsense is legitimate or not in considering their punishments?

Is this Tubbs person really transitioning ? I have yet to see a photo of him looking like a woman and he sure sounded like a dude in that prison phone call to his father.