Becerra is being given the Kamala Harris treatment:: Appointment to a position for which there was no prior experience, and then no offer of guidance or support. 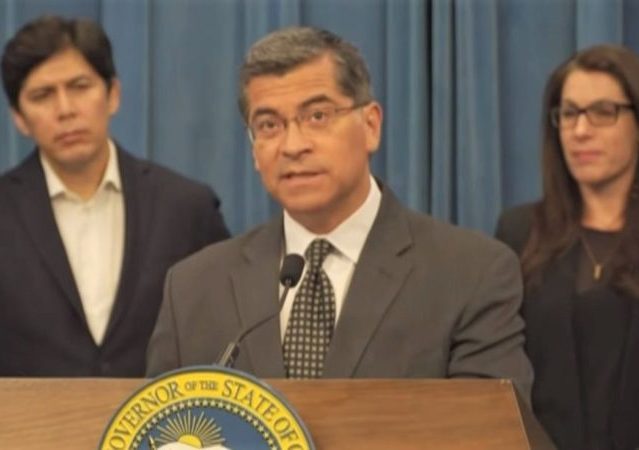 When covering this current administration, one must take what joy one can.

Mainly in the form of schadenfreude.

Many Legal Insurrection readers will recall my posts on Xavier Becerra. He constantly sued President Donald Trump‘s administration for implementing its America First suite of policies during his reign as California Attorney General.

The current occupant of the White House thought it would be an excellent idea to allow this progressive activist to head a department focused on health and human services during a pandemic.

To the surprise of nobody who followed Becerra’s antics, the strategy failed.

Top White House officials have had an uneasy relationship with Becerra, the health and human services secretary, since early in President Biden’s term. But their dissatisfaction has escalated in recent months as the omicron variant has sickened millions of Americans in a fifth pandemic wave amid confusing and sometimes conflicting messages from top health officials that brought scrutiny to Biden’s strategy, according to three senior administration officials and two outside advisers with direct knowledge of the conversations.

The frustration with Becerra comes as top White House and health officials face growing criticism for health messaging missteps, as well as controversial policies about coronavirus testing and isolation.

The administration has also struggled in the face of a tsunami of cases that have overwhelmed hospitals and shuttered some schools and businesses because so many workers became infected.

It appears that Biden treated Becerra much like he did Kamala Harris: Appointment to a position for which there was no prior experience and then no offer of guidance or support.

Becerra, who had little health care experience coming into the job, was never given a defined role in the pandemic response, allies pointed out.

Still, those officials who have discussed his firing, believe he should have acted as a ‘de facto field marshal,’ The Post said, of the U.S. government’s health bureaucracy.

They pointed to the federal government’s changing messaging on COVID-19 booster shots and isolation guidance as evidence.

The sources also argued that differences between Becerra and the White House has complicated the pandemic response.

Despite all of the problems, it looks like Becerra is not in danger of being fired.

The report indicates a change would likely anger the Congressional Hispanic Caucus and other organizations that have pushed the president to name more Latinos to his inner circle.

Appointing a replacement for Becerra quickly could also be difficult in light of the evenly divided Senate and the added workload caused by the recent retirement of Supreme Court Justice Stephen Breyer.

So while Biden may not appear to be tossing Becerra under the bus entirely, he’ll be kept around to be the scapegoat for many of the pandemic response problems. It couldn’t happen to a more likable guy.

Another flaming radical issued out of Stanford Law School.

“It appears that Biden treated Becerra much like he did Kamala Harris: Appointment to a position for which there was no prior experience and then no offer of guidance or support.”

At least the *resident doesn’t have to guide or support a Supreme Court Justice after he flings her towards an oncoming bus.

” Appointment to a position for which there was no prior experience, and then no offer of guidance or support.”

That sounds like Biden himself, let alone Pete Butthead, Kamala Harris, and the present disaster Becerra.

The planting of these time bombs of human beings is intentional.

Becerra was nothing but a “tool” for Harris to distance her from anything that might be perceived as negative. Nice to think of him getting canned.

I agree with 2cents that Becerra was meant to take the heat for Harris, who was supposed to be “in charge” of the disaster at the border.

But I think that Becerra crawled under the bus under his own power.

Besides timing which will place two high profile nominations competing and complicating the log rolling for support are Biden’s diversity cabinet choices. The admin nominations were allocated out to the various d/prog regional (N/W/S/E) interests, ‘moderate’ v progressive wings, Obama v Clinton factions and all of those considerations overlayed by ethnicity.

So removing Becerra and not replacing him from the same area on the overlapping Venn diagram of d interests will automatically PO some portion of the d party. Will the CA delegation demand the replacement be a Californian? Will latino org demand a latino? Will other regions and other ethnic power blocs demand a turn for their nominee? Not to mention Biden has very likely locked future d/prog admins into this idea of an ethnic spoils system for cabinet nominees and SCOTUS.

Sure he is. Because Biden’s handlers are now desperately attempting to create a narrative where all of Biden’s failures are the result of other people. So throw Becerra under the bus for the inept and incompetent covid response. Throw Harris under the bus for her complete bungling of the southern border crisis. Throw Buttiegieg (sp?) under the bus for failure to do anything about the supply chain mess. And on, and on.

But one’s thing for sure. It sure as hell won’t be Biden’s fault.

Can’t get the Genie back in the bottle without the compression equivalent to the weight of a bus passing over a torso. Fr=Wg^2/1.373 where Fr is force required and Wg is weight of Greyhound Bus.

I think Biden (or whoever makes decisions in the West Wing) are too afraid of the Twitter crowd to can Becerra.

Any other administration would have already made major changes to replace the current crew of incompetents and t0 change the subject – at least for a few days – in the media.

There is enough ‘throwing’ needed to require many busses.

Worming out of this ought to be rich. Midterms are going to hurt.

The GOP candidates need to articulate an agenda that is more than just “we’re not the Democrats” in order to get the massive win everyone seems to think will just happen in the mid-terms. Because the Democrats are removing GOP House seats by the dozens in their states with the redistricting maps they’ve drawn up while in GOP run states the RINO wimps are kowtowing to the Democrats for some weird reason.

GOP or somebody needs to get an accurate count of eligible votes. The rest would take care of itself.

Team Biden is vexed: can’t keep Becerra but can’t get rid of him either. Better to just let him twist in the wind in the hope he’ll soon “voluntarily” resign.

The whole Covid strategy seems to be vaxes. And Biden allocated that job to OSHA, not HHS except for healthcare workers. So I guess Becerra’s job amounts to efficiently driving healthcare workers out of the profession or underground unless they agree to the shots.

I hope for total incompetence, in that case.

The two most important reasons Harris – Xiden appointed Beccera was because he gleefully and consistently warred against Christians in the abortion wars while Atty General in Cali. It didn’t hurt that he was Latino either. Consider it a bank shot. Cheers –

How surprising! A political hack – with a LAW degree, no less – who has never worked in the private sector cannot manage a huge federal agency!

That law degree likely came at least in part to having a Spanish name.

For some reason I thought it was Portuguese.

Biden can’t even pronounce his name!

“It appears that Biden treated Becerra much like he did Kamala Harris: Appointment to a position for which there was no prior experience and then no offer of guidance or support.”

There’s a “yuge” difference there. With little staff, and that staff being primarily Schedule C political appointees who change with the administration, there’s no significant level of real institutional knowledge for the VP’s support. Any support must come from 1600 Pennsy Ave, the political party in charge and the VP’s friends (of whom Kamala has few).

OTOH, every federal department, subsidiary agency, etc. has a significant bureaucracy which serves as a resource for the Secretary and all appointed below the Secretarial level. It surely isn’t the case that the staff of Health and Human Services is comprised mostly of right wing Trump supporters (like most all Republican administrations, Trump failed to fire all the Schedule C appointees and left many Obama holdovers in place across the government).

Couldn’t happen to a nicer guy, but one of the things that has continually mystified me while working around Washington, is how both parties think appointing lawyers who almost never have any executive experience in managing large diverse organizations that actually have to deliver to run complex organizations in any way a good idea? I can see that for the department of Justice, but not anywhere else.