Teachers barricaded the students in the lunchroom and turned down the thermostat. 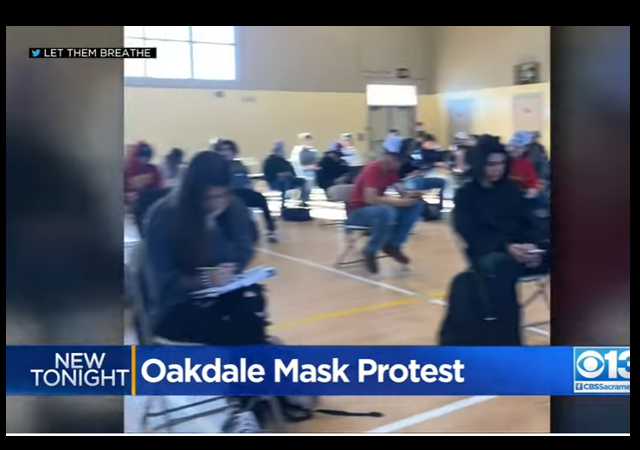 Last week, I reported that California Governor Gavin Newsom was among the many state politicians who were slammed for going maskless at an NFL playoff game, incidents which were captured in photographs taken with former Laker Earvin “Magic” Johnson.

The hypocritical behavior, coupled with the fact that the Centers for Disease Control and Prevention basically came out and called cloth masks ineffective, and the revolt of the Canadian truckers against covid restrictions inspired hundreds of students at one California high school to arrive maskless.

Hundreds of students in Oakdale were banned from class for not wearing their masks.

The students say they were following Gov. Gavin Newsom’s example after photos showed him maskless at the NFC Championship Game over the weekend.

The students were bare-faced and packed into the Oakdale High School gym. Freshman Nolan Harris was one of them.

“By the end of the day, there was about a hundred kids in there,” he said.

Throughout Oakdale Unified’s seven campuses, more than a hundred other students ditched their masks, too, in protest of Newsom’s mask mandate.

The students posted some of their demonstration onto social media.

According to an Instagram post by the user let_them_breathe, students through the district are refusing to wear masks.

“High schoolers have been sent to the gym and filled it with more unmasked students on their way,” letthem_breathe wrote in a tweet.

In the video, students can be seen sitting in folding chairs, spread through the gym.

It turns out, they were not such much “banned from class” as barricaded inside lunchrooms.

Maskless students in California said they were ‘barricaded’ inside their school’s gym with lunch tables propped against the door and temperatures turned down as they protested Gov. Gavin Newsom’s mask mandate.

A photo from one of the students at the Oakdale Joint Unified School District captioned, ‘Locking us in,’ shows the tables blocking the doors from the inside on Thursday. School staffers could be seen standing by on the outside.

The students claimed staff members turned down the thermostat to ‘freeze them out,’ according to Reopen California Schools and that it was only turned up when police arrived and they were allowed out.

However, Oakland Police said the temperatures were not low. A school officer had responded to the situation, and deemed it not a police matter.

A follow-up video on Reopen California School shows the maskless students marching in the streets on their way to the district headquarters in an apparent planned ‘protest’ as people in the streets cheered, ‘Let’s go, Oakdale.’

Being barricaded in a room is a significant life safety issue. In fact, the breech in fire safety protocol is enough that if I had an child at the Oakdale school, I would be contacting attorneys and arranging for a campaign for the school board.

I can only hope that like the “Freedom Convoy” these brave students act as an inspiration to others.

Good for them. Follow the science, not the cargo cult, not submission to empathetic appeals, and, perhaps ironically, not take a knee to viable legal indemnity.

I’m guessing what’s coming next: Banning the use of personal cell phones and tablets while at school.

We did that a long time ago.

If they locked kids in, then they need to be fired. Period. Same if they dropped the temp on purpose. Vindictiveness toward children, even big children, should be a career ender.

Barricaded inside the lunch room. High schoolers. That’s where the food usually is. When I was in h-s that would be a dream come true. If the room got cool, us boys being proper gentlemen, would eagerly offer to help the girls stay warm.

Seems a good science project would be to prove just how large a particle has to be before stopped by the face diaper.

If liberals had any ability to accurately imagine the future, they’d realize such draconian responses will turn this generation against them.

But then if they could accurately imagine the future, they wouldn’t be liberals.

INSURRECTION! Q-ANON! WHITE NATIONALISM! Or something.

Don’t forget the Tri-Lateral Commission, the Rothchilds and ((( I the parentheses people ))).

If I had more money that I knew what to do with, I would found a new fast food burger joint. It would be cafeteria style. You pick up the basic cooked meat patty and the bun of your choice. Then there would be a table where you could add all of the ingredients that you wanted to add.

And I would give it the name Berger Bilders

Can you spell out the last half of your second sentence?

I only wrote one. If you mean my reference to people enclosed in three sets of parentheses. That is a code system that anti-semites use to refer to Jews.

Better a smile to your heart than a beat to the face.

Once again the dems have overplayed their hand! Rather than being universally accepted and the “new norm”, they are finding that people have reached a point of NO MORE and are fighting back in any way they can! Not wearing a USELESS mask is a small step. Refusing their “vaccines” is a bigger step! Any mandates for either should be struck down simply due to the facts that if masks work then why don’t they and if “vaccines” work then why don’t they?? Many more Americans have FINALLY been DIRECTLY affected by democrat doctrines and they don’t like it! The dems finally got into THEIR BACKYARDS and people want them OUT! The level of fraud in the 2020 elections will have to be ratcheted up several notches for any dem to survive in anything other than a 90% democrat craphole! This has to end! And it take only YOU to make it happen. But we need a few hundred MILLION “you’s”!!

The editors at the Daily Mail are apparently unaware that Oakdale and Oakland are very different places, in many respects. 🙂

Wouldn’t that be a safety issue by having the doors blocked? Could the kids be able to get out if there was a fire at the school?