Muhammad Ashraf Abed, a member of the Hamas al-Qassam Brigades, died after tunnels built in sand collapsed due to heavy rain. 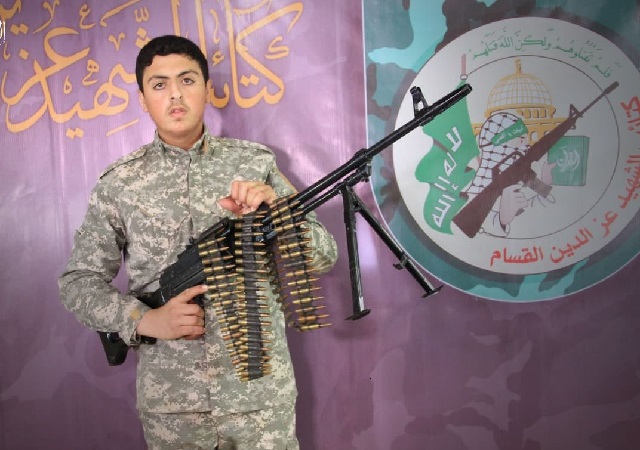 The Islamic terrorist group Hamas suffered another setback as it expanded its massive terror tunnel network underneath Gaza. The 24-year-old terrorist, Muhammad Ashraf Abed, was “martyred” after a tunnel collapsed over him, the Gaza-based Islamic terror group confirmed Wednesday.

The terrorism-related occupational accident is the latest in the caving tunnels caused by heavy rains. Hamas claims to have dug up more than 300 miles of tunnel network crisscrossing Gaza. Many of these underground terror tunnels have been dug through the sand and run beneath crowded neighborhoods, schools and mosques.

The Times of Israel reported the latest Palestinian work accident:

A Hamas terrorist was killed Wednesday when an offensive tunnel collapsed on him, the Gaza-based group said.

Hamas named the terrorist as Muhammad Ashraf Abed, 24, from the city of Rafah in southern Gaza.

The Izz ad-Din al-Qassam Brigades, the terror group’s military wing, said he was “martyred after the collapse of a resistance tunnel.”

Several Hamas terrorists have reportedly died in recent months while working inside the tunnels, primarily built in sand, due to heavy rains that have led to their collapse.

In November, Maj. Avichai Adraee, the IDF’s Arabic spokesman, warned residents of Gaza of the issue, imploring them to stay away from the tunnels due to landslides in the area, which he said were the likely result of the destruction of the underground system.

“According to estimates, the cause of these collapses is linked to the underground system of Hamas,” he wrote in Arabic.

“These events are the latest example, but not the only one, of Hamas’s absurd use of civilian areas. It is unpredictable when the earth will shake again under the feet of the Gazans because of this blatant exploitation that the local population pays for time and again,” he stated.

While terrorists like Muhammad Ashraf Abed endanger the lives of Gazans as they dig under their homes, schools, and mosques, such men are enticed with rich heavenly rewards for their “martyrdom” in the path of jihad. In 2018, a Sharia court judge from Gaza, Sheikh Omar Nofal, assured that a martyred jihadi “is married to 72 virgins of Paradise.” He added that a “martyr can vouch for 70 of his relatives. The martyr can intercede on behalf of his entire family.”

“How can anyone cling to this world after hearing all of these great rewards?” the bearded old man declared on Hamas’ Al-Aqsa TV channel.

The constant flow of generous foreign aid in the name of ‘rebuilding’ Gaza has enabled Hamas to acquire heavy equipment, including mining machines, to dig the vast tunnel network. These terror tunnels, built at an estimated cost of $150 million, are equipped with electricity and communication devices. “Terror tunnels can take a year or more to complete and require significant financial resources, engineering knowledge, manpower and supplies (a single tunnel can require up to 500 tons of concrete),” an Israeli Foreign Ministry report says.

According to the Israel Defense Forces (IDF), Hamas tunnels are used as “weapons caches, bunkers, command centers and a concealed transportation artery for terrorists and weapons, including rocket launchers.”

The Hamas tunnels leading up to the Israeli border have an even more sinister purpose. “Some of these tunnels lead directly from Gaza to Israeli communities near the border, enabling terrorists to infiltrate, kidnap and attack Israeli civilians,” the IDF warns.

He wasn’t wearing his mask.

Another tragic victim of white supremacy.

“The 24-year-old terrorist, Muhammad Ashraf Abed, was “martyred” after a tunnel collapsed over him.”

Probably ruined the rest of his day.

Gee, bummer.
Will CA name an elementary school after him?

I love a happy ending.

Sorry. The judges have ruled that one must be human to qualify as a Darwin Award candidate.

He doesn’t look like the brightest bulb. Perfect cannon fodder for the Hamas mafia to exploit.

Did the tunnel collapse on its own, or was this a case of premature detonation? Good result either way.

He looks retarded. I see now where the US Army has unloaded its surplus of digi-cam uniforms.

“Run! Run! The tunnel is going to collapse.”

“Collapse? What collapse? I don’t see any collappppppppse……..”

Judging by his looks, he wasn’t the sharpest spoon in the drawer.

He took that wrong turn to Albuquerque
What a maroon

1. How do they talk about rewards that the human mind can’t comprehend?

2. What if a martyr gets a baby on some of those virginal chicks? Is Single payer Medical care available? Does Allah dispense birth control up yonder? How will the martyr know that Allah hasn’t been messing around?

1. How do they talk about rewards that the human mind can’t comprehend?

2. What if a martyr gets a baby on some of those virginal chicks? Is Single payer Medical care available? Does Allah dispense birth control up yonder? How will the martyr know that Allah hasn’t been messing around with his chick?

Because of rain? Then climate change got him.

I recommend to the IDF that they get some huge gopher gas repellent bombs (actually poison, but “repellent” sounds nicer to the shoppers at Home Depot). These will kill the rodents in their tunnels, and the escaping smoke will identify the openings for subsequent remedial activity.

Then pump in some massive quantities of gasoline to blow the tunnels up.

And I don’t care about civilian injuries.

If you did that you’d incite a whole generation of people to seek retaliation against the IDF, and by association against Israel.

Including many people living in Israel, the US and Europe.

Which would change matters in what manner? Dead terrorists cannot retaliate against anybody.

Remind me who the terrorists are?

Maybe I’m alone in finding the use of the term ‘rodents’ both ironic and also deeply hypocritical. https://www.theguardian.com/artanddesign/shortcuts/2015/nov/18/rats-the-history-of-an-incendiary-cartoon-trope

Gas is too lively. Rat traps to preserve the children’s lives.

Good riddance! another Islamic terrorist bites the dust! Remember the famous lines of The Searcher! !

The gift that keeps on giving.

Why do we care? It’s like naming the guy who set The Library on fire. Don’t. Let him die in obscurity.

It would take a heart of stone not to laugh after reading this “work accident” report.

So why doesn’t Sheikh Omar Nofal go out and become a martyr for the Cause??? Doesn’t he want his 72 virgins and one-on-one meeting with Allah?