Canadian Police “Move In” On #FreedomTruckers At Ambassador Bridge

Canadian Police “Move In” On #FreedomTruckers At Ambassador Bridge

CBC reporter: “Police are slowly closing in on Windsor protesters who insist on singing O Canada” 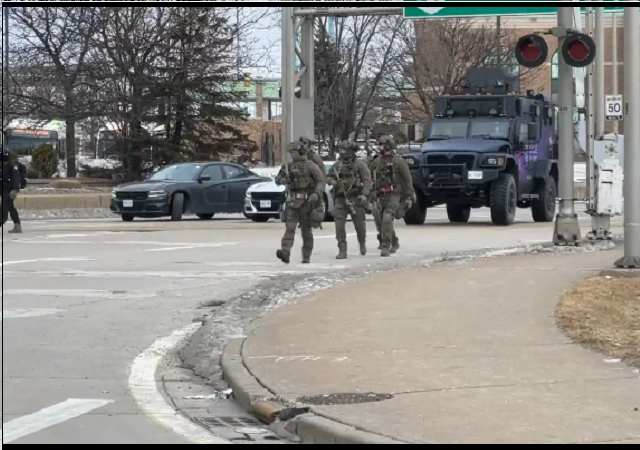 Canadian law enforcement are reportedly “closing in” on the Freedom Truckers situated on the Ambassador bridge.  The Canadian government is grossly mishandling the situation: From Prime Minister Justin Trudeau’s tone-deaf insistence that the truckers represented a “fringe minority” with “unacceptable views” to Ontario Premier Doug Ford announcing a state of emergency for the Ontario province.

On Friday, a judge ordered the truckers and their throngs of supporters to clear the Ambassador bridge by 7 p.m.

BREAKING: Injunction will be granted.

Justice: Satisfied that the case has been made out for an injunction, which is granted.

It will take effect at 7pm this evening. This gives individuals the opportunity and the time to clear the area.

…further unlawful activity or you may face charges. You could be arrested if you are a party to the offence or assisting others in the direct or indirect commission of this offence."

They add: vehicles may be seized.

Yes, that does say that “vehicles may be seized.” Surreal.

The Freedom Truckers didn’t budge, so the deadline was then postponed until midnight.

The court-ordered 7 pm deadline for Windsor protesters to vacate the Ambassador Bridge has come and gone. They’re still here. Police have warned they could be arrested, charged and their vehicles may be seized. pic.twitter.com/8HqDv6iFCO

Police are distributing these flyers about the province’s State of Emergency. pic.twitter.com/D6rYC2a6zE

So on Saturday morning, police began “moving in” on them. With “military-style gear.”

The police at the Canada/U.S. border begin to move in on protesters in Windsor, Ontario, Canada near the Ambassador bridge. pic.twitter.com/xEAtizQrMX

RCMP reinforcements have arrived at the Windsor protest site including officers in military-style gear in the back of the line pic.twitter.com/Gas0fy9NY1

The stand off continues here as protesters continue to challenge police. pic.twitter.com/BCiIAtyJgj

Stand-off between police and protesters in Windsor. Officers aren’t moving to arrest demonstrators yet but are giving them less and less room. pic.twitter.com/nO8imBB1lH

The (actually) peaceful protestors began moving their vehicles and packing up their support efforts in compliance with police orders.

Police have cleared the intersection of Huron Church Road and College Avenue in Windsor near the Ambassador Bridge where protesters have been camped out since Monday. Police line still slowly pushing protesters back on Huron church. pic.twitter.com/jo98JKkBsV

Vehicles blocking the Ambassador Bridge pulling out one by one. Still being cheered on by protesters as dozens of police officers have surrounded them. pic.twitter.com/e2ZAWUrJun

Windsor protesters are packing up the BBQ gear pic.twitter.com/MnI1xozyhg

This is a developing story, but it looks like the protestors are peacefully clearing the bridge location. And all without the government blasting Barry Manilow and the “Macarena” at them.

In the meantime, I want to point out that the Canadian government media, backed by enthusiastic Democrat media propagandists in the American media have all decided, in unison, that the Freedom Truckers protest is an “illegal occupation” and “siege.” They, like their political overlords, are unbearably condescending, dismissive, and downright contemptuous of these Canadian freedom ralliers.

This tweet from Dingle is so haughty and clueless that I decided to screen grab it (archive link.). 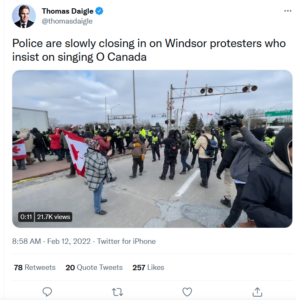 Bill Maher, definitely no conservative, understands better than most on the left what’s fueling public anger at government and the media.

Panelist Vivek Ramaswamy, author of “Woke Inc.,” agreed with Maher’s assessment and said that the protests are about the “uprising of everyday citizens” against “the rise of this managerial class in democracies around the world.”

“These are the unelected class leaders that ultimately, I think, are using the bureaucratic power to supplant the will of everyday – not only Americans but Canadians and Western Europeans too – and that’s why we’re seeing a fusion of both the left and the right here saying that, ‘Actually we want our voices heard. We want to be able to speak without fear of putting food on the dinner table,'” Ramaswamy said.

Maher noted that truckers are organizing protests because, during the pandemic, they were the ones still working to deliver products as usual while others were able to work from home.

. . . . The HBO host also highlighted a report from The New York Times revealing that 72 percent of the $800 billion in COVID relief was spent on households with incomes in the top 20 percent.

“I think this is what the truckers are mad at … all that money went up to the people who are in the top 20 percent?” Maher asked.

While he gets most of this right, I’m pretty sure the Canadian truckers don’t care how U.S. covid money was squandered on people who didn’t actually need it. But they do resent being the “essential workers” who kept their country afloat during the height of the pandemic who are now having their livelihoods threatened over vaccine mandates.

This is not only unreasonable and cruel but makes zero sense since the “vaccines” don’t stop the virus at all. The vaccinated still get covid, and they can still spread it to others. Besides, 90% of Canadian truckers are vaccinated; they aren’t anti-vax, they are anti-government mandates that are flippantly treating the heroes of the early pandemic like public enemy number one.

Government in Canada (and in America and across the Western world) overreached, and rather than grasp that they tipped the balance by going too far, they are doubling down in the face of clear public revolt.  It’s a mistake.

I think it’s hilarious that the socialists are furious about the workers of the world uniting.@SohrabAhmari

LOL! So the gubmint calls it an “illegal occupation”. Meanwhile, the US is being invaded by illegal turd-world invaders, and Poopy Pants gives them FREE air travel to various locations in the US. I guess the definition of illegal depends on context.

Sedition against tyranny is a patriotic duty.

Taking a page out of pelosi’s playbook. Call it an insurrection. Canadian media is mostly government controlled.
Which is why the citizen journalists are so important.

Since you didn’t bother to open a dialog first when this ends up Selam, Waco, Ruby Ridge or Tiananmen square you only have your cowardice to blame.

Yeah, kind of a busy day for me since we are out some regular writers, so I didn’t have the time or luxury to get into a lot of detail on this (or any of my posts) today. One thing that I’ve learned as I’ve gotten older is not to jump to the worst possible conclusion about someone’s actions or motives (about which you know nothing since I don’t know you from a hole in the ground).

Meanwhile, the protestors willingly and peacefully dispersed, as I did note in my post, but when Canadian Mounties start running tanks over people or randomly shooting innocent civilians, I’ll make the time to make the connection to other government atrocities.

Not seeing them here, I didn’t. But then, I’m not a crazy alarmist ready to call J6 an “insurrection” or a bunch of truckers and their supporters peacefully leaving the Ambassador bridge the worst thing in government violence since Waco or Tienanmen Square. This kind of goes back to my point about not immediately jumping to the worst possible conclusion. No, this is not Ruby Ridge, so why on earth would I make that connection? Why are you?

Fuzzy, you might want to take a second to consider your own advice. This post clearly looks to be aimed at politicians that didnt open a dialog with the protesters.

Hmm, you may be right! It didn’t even occur to me that the “you” wasn’t directed at the post’s author (in this case me). If you’re right, I certainly owe 2smart an apology!

@2smartforlibs, if I misunderstood the target of your comment as healthyguyfsu points out is possible, I very much apologize for my mistake.

If things are cooling, I wonder if there is some behind the scenes talking so all sides (politicians, police, freedom fighters) can “win” in some way as the gov may be cornered and want this to end peacefully. The Globalists do not take prisoners so Ford may be cornered and not want to be used as an example.

Do not trust anything from the CBC as they are a propaganda tool.

Exactly! This is why I only included Dingle’s tweets that included video so we can see for ourselves.

As an unrelated aside: ALWAYS watch the video of any leftist media hack because their “take” or headline is often quite the opposite of what is actually in the video.

So why don’t they remove the mandates?

I know the answer, but no one is forcing that question. It’s about power. It’s about compliance.

Voluntary dispersal is the better option. Take Trudeau’s advice and go home…..but not back to work. Go home and go Galt for two weeks. Use the moment to call for a solidarity strike by the Canadian people. Then reassess and repeat as required. Keep up with an IO campaign using alternative media urging the govt to lift mandates and vax passport regime implementation.

If the truckers retain their vehicles past this weekend because they disperse then they retain the ability to deny service deliveries or create another logistical/transport bottleneck in the future. Allowing them to be confiscated for some point of principle is foolish. Victories are not won via principles but through the ability to force your opponent to react and forcing him to place his weaknesses v your strengths; not by consolidation into one target area for the superior opponent to easily attack.

I agree that voluntary dispersal from the bridge is a good move, but I hope they don’t retreat beyond that. They made their point: they can shut it all down. I seriously love that show of power from the great unwashed. The elite don’t get to enjoy to the perks of their elitism if the people they are treating like subhuman chattel refuse to deliver them.

I don’t. Alberta had it covered with the farmers coming in. Layered approach seems to work even better. Everyday they block, the more their issues are publicly known.

Never forget, the most dangerous place in any jurisdiction is standing between a cop and his pension.

I find the trend of cops wearing masks to prevent facial identification to be extremely disturbing.

It’s a mistake for them to back down. Once they are back home, the Stasi will take all the information they collected and start tracking them down and arresting them individually like they did to Jan 6 protestors.

That’s a definite possibility, but going to several hundred or several thousand separate locations:
1. More labor intensive for govt
2. Would be known to public within minutes/hours
3. Would be perceived by some as an escalation
4. Likely to create a new series of widespread protests

Dispersal doesn’t mean giving up, it’s a tactical retreat to further the strategic goal of an end to mandates and a vax passport regime. Particularly if they adopt a go home and go Galt strategy as they view the govt response.

Is it just me or are we all a little on edge right now?

I blame the up and down weather in my area. Plus, there’s some disturbing world events and the dwindling of our savings due to Bidenflation.