Doug Ford said his “cabinet will enact orders to make it illegal to block borders and highways and impose $100,000 fines and prison terms for those who defy them.” 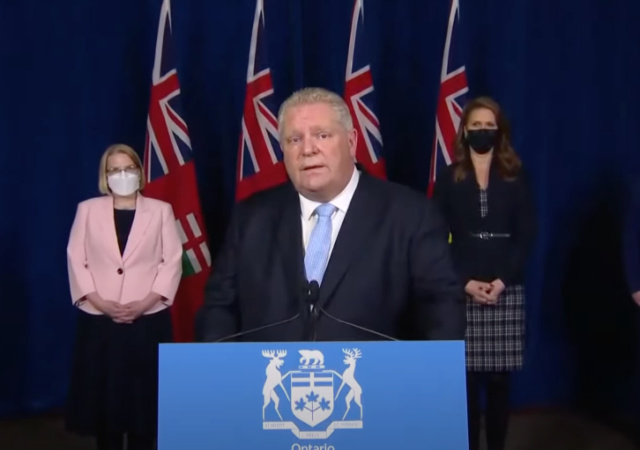 Ontario Premier Doug Ford announced a state of emergency for the Ontario province after the Freedom Convoy blocked the Ambassador Bridge.

The premier of Ontario acts as the head of government for the province like a governor of a state.

Leslie pointed out in her post that the Ambassador Bridge, which connects Detroit to Windsor, Canada, is the busiest international land border crossing in North America.

From The Globe and Mail:

Ontario Premier Doug Ford is declaring a state of emergency in Ontario to deal with the border blockade and Ottawa protests and says his cabinet will enact orders to make it illegal to block borders and highways and impose $100,000 fines and prison terms for those who defy them.

Mr. Ford also said that the government will consider taking away personal and commercial licences from anyone who refuses to leave the protests. He urged protesters to depart, including those who have brought children to the blockades.

He outlined the actions on Friday, saying he supported the right to protest but that the blockade of the Ambassador Bridge in Windsor, Ont., was harming an economic “lifeline” for the province. He also called the protests in Ottawa a “siege” and an “illegal occupation.”

Read what else Ford said because he reiterated everything the Freedom Convoy is protesting against:

Ford earlier said “this virus forced us to make unthinkable sacrifices. And I know that this has been extremely difficult watching businesses close, livelihoods lost, freedoms restricted.

“None of this has been easy. People are frustrated, they are scared, they are angry and I know these frustrations have reached a boiling point for many Canadians,” he continued. “The result is what we are now seeing in various cities across our province and our country.”

The Freedom Convoy’s main motive revolved around the COVID vaccine mandate. It’s extended to the government grabbing everything as Ford said.

Why not follow the premiers of Alberta, Quebec, Saskatchewan, and Prince Edward provinces by ending or rolling back mandates and vaccine policies?

Oh, wait. That’d be giving in to these awful people. Cannot have that now, can we!

But Ford and Prime Minister Justin Trudeau might now have a choice. Ontario Chief Medical Officer of Health Kieran Moore said he will give the province’s “government recommendations on speeding up” the timeline to end capacity limits due to the decline in hospitalizations.

Dr. Moore also took under review Ontario’s other mandates like the “vaccine-certificate system for restaurants and other high-risk businesses, and its mask rules.”

Anything but open a dialog. Force is all the left has.

Yes, of course, because they know that if they try to argue on merits they lose by default. Their argument has no merit.

And what are the merits of the truckers case? As far as I can tell it’s the standard anti vax nonsense.

Ha ha ha. Like we really give a shit how far you can tell.

It’s an enlightening view into your intellectual boundaries.

“As far as I can tell it’s the standard anti vax nonsense.”

Hey fatty, here’s the standard vax nonsense – the vax will protect you from getting the virus and keep you from spreading it. It was full tested in trials and received emergency use authorization.

Now that is nonsense as:

How many vaccinations exist for any class of airborne virus? You don’t know that do you?

Dialog is just fine as long as you show up, hat in hand, head bowed and ready to obey the leader after it’s over.

Evidently he gets his political advise from Liz Cheney.

If he follows through on his threats his political career is over. It’s probably over anyway.

This is Canadian politics. The people basically have no real input over which individual is in office, the parties do. So his career as a budding tyrant may be just taking off.

A clear and progressive case of jumping the baby… fetus. What is his fellow Canuck’s choice, or do they endorse his Choice?

I think I liked “Ford the Crackhead” better than “Ford the Tyrant”.

Rob was a better leader coked out of his gourd than Doug has ever been stone cold sober.

Doug only got elected due to his brother’s name recognition.

Love the truckers. Blockade the govt offices, clog up downtowns, stop making deliveries and strike. But IMO closing the bridge to Detroit is a bad tactic.

Translation: What is it about being a slave that you do not understand?

Evidently the Premier doesn’t realize the simple solution to this “state of emergency”:

Yes, the correct answer is. STOP BEING A FASCIST, FASCIST.

Sorry, those are a feature, not a bug. Can’t lose the thugs.

Where’s the fun in that?

Freedom’s just another word for nothing left to lose Nothing don’t mean nothing honey if it ain’t free,

That’s good enough for me and Bobby McGee….

Maybe the truckers can fly some BLM flags and loot and burn some stores. The media will love them and Princess Trudeau will ‘take a knee’.

So protesting is only aceptable if t’s done quietly or privately, where it can be easily ignored. Isn’t that convenient….for government.

The way things are going soon the ‘reparations’ shoplifting gangs in big blue American cities won’t find anything to shoplift and sell on ebay or to neighborhood pawn shops and fences.

Such a situation would be intolerable. The already waning support for Brandon in the ‘black community’ might accelerate.

Moving third acts of thuggery to the subs

Here it comes, the coming heavy hand of force applied by the govt….IOW ‘ come and see the violence inherent in the system’ as citizens are in fact repressed.

Sixteen dead on Ambassador.
Who takes the torch abandoned by an old fraud?

The questions remaining are:
1) Will the Canadian Armed Forces get involved? They have already refused to before because it is a “civil matter” but they may be ordered to.
2) Will the RCMP open fire on command?
3) Will the Ottawa police [they have a separate force from the RCMP] open fire?
4) Will the surviving truckers refuse to pick up or deliver to Leftist areas?
5) What will Biden do to screw it up worse?

Let me add to #4. By that I mean nationwide, AND how will the Freedom Truckers react to any truckers who do the bidding of the State? None of the people involved are genteel.

This is a very critical protest by people with the power to shut down the country and that is only reserved for the elite and powerful. Ford will not bend as power only flows from top down and not from the people. Ford “fears” the people and that is freedom.. the govt must make the people fear the State. All the while, the organs of the State… CBC, etc fashion this protest as vile and selfish… in cahoots with Trump’s deplorables, racists..etc… the usually Harvey Korman “Blazing Saddles” baddies. If the truckers fold… so folds Canada to being other than a place on a globalist map.

Trudeau is also getting tips from Raul, Xi, and Biden’s puppeteers. Don’t forget, Canada trained PLA commandos in arctic warfare to battle the Indians on the Chinese border. The communist apple didn’t fall far from the Maoist tree.

UPDATE: As of 1950 hrs. MST. Word has come out. 1) President* Biden has released a press release siding with Castreau and demanding the Ambassador Bridge be re-opened. The Premier of Ontario and the mayors of Windsor and Ottawa are threatening mass arrests, and police are gathering. RCMP reinforcements are en-route. Castreau has said the military will be used as a last resort. All those above in the Canadian government are blaming the evil Americans.

Dance cards are filling. I remember that the Canadian forces trained Chinese PLA troops in mountain warfare for a couple of years to suppress Tibetans. I wonder if they paid it back by training for Tienanmen.

Then we will see who brays the loudest for the deaths of the truckers and others killed by the Canadian police.

Amazin’! ain’ it? From the looks of him, his food supply isn’t being interrupted – in the slightest!

It’s 7 PM Ontario time. Showtime for the “Leave or else!” order issued by a Canadian judge. Will there be live news coverage? Will there be any?

Where does he get the authority to create new crimes and financial penalties? Isn’t that the purview of the Ontario legislature?

They already did that; it’s called the Canadian legal system.

A Canadian judge has granted a court order to end a truckers’ blockade of a vital trade link with the US.

The injunction approved by the Ontario Superior Court of Justice came into effect at 19:00 local time (midnight GMT) on Friday.

The Ambassador Bridge, linking Windsor, Ontario, with Detroit, Michigan, has been blockaded for five days.

Truckers’ protests against Covid restrictions are also ongoing at other border crossings and in Ottawa.

The injunction was filed by the city of Windsor and the Automotive Parts Manufacturers’ Association, which argued that they were losing as much as $50m ($39m; £29m) per day because of the convoy.

Following the court order, Windsor Police put out a statement to “make demonstrators clearly aware that it is a criminal offence” to block the border crossing. The police added that criminal conviction could lead to the seizure of vehicles and the inability to enter the US.

After 2 years of hate aimed at the people who didn’t want to vaccinate now all of a sudden they’re just evil protesters.
Who shut the boder down for 2 years and threatened everyone’s job if they didn’t kowtow to the government?
I think no trucker who is vaccinated should drive a truck to the border. They should all be unvaccinated.

to clear a stubborn holdout of Freedom Convoy truckers blockading their downtown,

Ford is facing an election in June and he needs votes in Toronto which is very far left. I doubt he’d have declared a state of emergency otherwise.

Doug, it’s about reestablishing our God given freedom. You never had the power you claim in the first place, that is not who we are supposed to be. If you choose to end this protest with a heavy hand it is not going to end well for you.