From one of the “experts” the CBC interviewed: “Freedom is a slippery concept.” 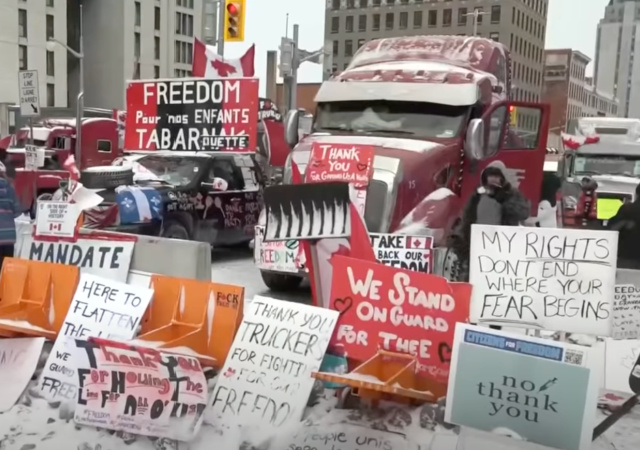 Violent forms of freedom, you guys.

The Freedom Convoy wants the Canadian government to end COVID pandemic policies, especially the vaccine mandate. They have gained steam with support coming in from around the world and donations pouring in to keep the protest moving.

The left is not scared of the Freedom Convoy. They’re scared of people not bending the knee. Since they are about to lose power and control they dipped to one of the lowest of the lows: demonizing the word freedom:

For many, freedom is a malleable term — one that’s open to interpretation.

That flexibility, in part, has fuelled its growth among certain groups, said Barbara Perry, director of the Centre on Hate, Bias and Extremism at the Oshawa-based Ontario Tech University.

“It is a term that has resonated…. You can define it and understand it and sort of manipulate it in a way that makes sense to you and is useful to you, depending on your perspective,” she told Cross Country Checkup.

Classic leftist trick! Let’s distort the definition of a word or add more to it so we can apply it to our narrative.

I didn’t realize that wanting to make your own choices “renders the word meaningless” as another person insisted:

Evan Balgord, executive director of the Canadian Anti-Hate Network, says the way many protesters frame their calls for freedom renders the word meaningless — and what they’re really asking for is a shift in government policy that could potentially have a negative impact on others.

“When they’re yelling they care so much about their freedom, they’re taking freedoms away from other people who don’t have the same kind of agency and choice that they do,” he said.

No one is taking away other people’s freedoms. You can wear a mask. You can get the vaccine. A private business can ask people to wear masks. You then have the freedom to take your money to another store. I mean…this isn’t hard.

Elisabeth Anker, a professor at George Washington University whined about something called “violent freedom” because too much freedom will cause a person to treat others as inferior:

“Freedom is a slippery concept,” said Anker, an associate professor of political science at George Washington University and author of Ugly Freedoms, which examines the history of how freedom, as a concept, has been used in American society.

“On the far right, [individual freedom] is often translated into somebody who refuses to be bound by norms of equality, treating all people equally or norms to remedy inequality, whether that’s trying to remedy racial discrimination or gender discrimination.”

The word has been used by far-right groups as part of push-back against efforts to remedy inequality, she added.

And while those forms of “violent freedom” can result in situations that are dangerous, discriminatory or anti-democratic, the call to action can gain broader support because fighting for freedom is seen as a noble cause.

Guys, if you allow people to have freedom they’re going to come after you. They’ll put you back in chains and force women to stay in the kitchen!

Anker should just move to a socialist country. Social good is more important than individual freedom:

Anker says the concept of freedom as displayed in the anti-mandate protests is something more often attributed to the United States. “Freedom is often used almost as a national entitlement, as a claim for what people have,” she said.

While some in the U.S. may see mask mandates as a violation of individual rights, for example, citizens in many other countries wouldn’t consider such rules to be an intrusion.

Anker said that the Freedom Convoy has caught Canadians off guard because their society is “so much more accepting of social interdependence.” Like they didn’t push back against mask mandates because it helped protect “society’s most vulnerable.”

Let’s listen to someone who is smart:

Freedom is now a forbidden word, it's *almost* like they are telling us their endgame https://t.co/3mR5OY8w8w

Yes, this is a vocabulary problem. The word “freedom” needs to be expunged if we are going to get through this.

The CBC just said the stupid part out loud.

“”the way many protesters frame their calls for freedom renders the word meaningless — and what they’re really asking for is a shift in government policy that could potentially have a negative impact on others.””

This looks like a good description of Anti-fa and/or BLM.

Or, maybe a better way to describe their action is “they’re asking for a shift in government policy that HAS ALREADY HAD a negative impact on others”. Is it just me, or that a better description of the freedom they’re talking about?

Sort of the same way the dirty traitors in the democrat party render the word “racist” meaningless, since they don’t have a coherent policy and must always claim opposition to their lunacy “racist”.

And Trudeau just invoked the emergency act. Says he doesn’t plan to call in the military but…. Looks like it’s on. Tiananmen Square can’t be too far away in the future.

I wonder if that little Napoleon will be the cause of a new world war? He starts gunning down Canadians, and things will likely blow wide open around the world.

These past few years, one of the great historical puzzles (how could so many good Germans have willingly become “Good Germans?”) got re-enacted for the education of us all, me included.

Perhaps we’re about to see another one answered for us: “How could the murder of a pissant Archduke in West Unimportant, the royal heir to nothing, trigger a world-wide war?”

Decades ago, a French-accented CBC announcer allegedly scrambled his words during a station identification. He was heard to say, “The following is brought to you through the facilities of the Canadian Broadcorping Castration!”

Little did he know…!

Still: you grow up in a socialist country, you lose sight of freedom.

When I was a youngster, Canada was socialist but still had a can-do, press-on-regardless attitude. Back then, even when the US dollar was strong, the rate of exchange was US$1.00/SCN$1.07 give or take a penny. Could the two be related somehow?

Gee, leftists kicking the living crap out of English in a dark alley again.
Who woulda guessed…

“When they’re yelling they care so much about their freedom, they’re taking freedoms away from other people who don’t have the same kind of agency and choice that they do”

Having agency means you have control over your actions. Free people make choices — your circumstances may limit the options, but all free people can make choices.

So just who does this academic believe lacks agency? Cannot make choices?

And how does MY freedom limit the freedom of others?

The sleep deprived wussies you live near by. They would give up their freedom and YOURS for quiet and sleep
They can’t stand in their feet and are willing to die on their knees

I assumed the speaker was referring to the kind of people incapable of getting a photo ID for voting.

‘how does my freedom limit the freedom of others?’

Simple. If you are able, within the normal limits of the social compact, to take some actions or refuse to take others as you see fit then that limits their ability to tell you what to do, which is very distressing to them.

Worse yet, this orthodoxy and the imposition of shaming, shunning, de-platforming, ostracism and now revoking financial services is supported by our institutions and co-opted by our elites. Their counterparts in govt embrace and approve of these tactics due to their utility in enforcing compliance and squashing dissent.

When you take back control over your life, labor, and wealth, you are depriving others of the freedom to sponge off you.

“And how does MY freedom limit the freedom of others?”

Well for example if you spread COVID to someone else then that person might end up in hospital. Thus you’ve limited there freedom. Choices have consequences. Finding the right balance is hard. One of the issues is that there really isn’t a good reason for the majority of people to get a vaccine. This freedom mantra has proliferated hence why many on the left use the mocking moniker of ‘freedumb’

Of course, the vaccinated have just as much chance of spreading the coof to their neighbors as the unvaccinated. More, in fact, because the only valid effect of the vaccine — the palliative effect — can cause less symptomatic people not to realize they should stay home.
Your gaslights still aren’t working.

The vaccines also significantly lowers the risk of death and hospitalization.

If you count facts as gas lighting you are in trouble

You just destroyed your own argument.

Honestly, the stupidity among so-called college professors is mind-boggling. How can such educated people spew out such ridiculous things? And they would be the first to scream if they have to live under the rules they want to impose on the rest of us.

Sure and scream they will because eventually they will run afoul of the inconsistent rules imposed after the fact. Only when the mob comes for them will they see the glint of the spears in the light of the torches as the mob forms on their lawn.

“Freedom is a slippery concept”. Yes, it takes an adult to understand “freedom”, doesn’t it?

I am proud to be counted as a”far right” freedom advocate.

“Freedom” is only violent for those who wish to suppress it.

In other words, only tyrants fear a free man – because the free man will not bend the knee, and he is ready to die on his feet rather than grovel on his knees like they want us to do.

So, what they’re clearly saying here is that the Left is totally anti-freedom. They’ll get no arguments from me as I hate communists.

Reminds me of those who claim their free exercise of religion is impeded when they’re prevented from forcing their religion on those who don’t agree with it.

Like the old line about the Pilgrims who came here so they could worship as they thought right, and make everyone else do the same.

You are confusing “Pilgrims” for “Puritans”.

Yeah, slavery is so much more descriptive of the lefts goals. So in their new age definition – slavery is freedom.

War is peace. Freedom is slavery. Ignorance is strength.

The far-right is anarchist. The far-left is totalitarian. The left-right nexus is leftist.

Or, in many cases, Nazis who claim to be anti-Nazis labeling their opponents Nazis.

The truly “far-right” in Canada couldn’t fill a minivan. What these academics refer to as far-right is someone like Mitt Romney.

The radical professioriat such as Anker et al do not believe in freedom of speech, free association , free exercise of religion, the right to bear arms , and most importantly in the concept that the Bill of Rights is designed to protect individuals against intrusion by government

Some even say it’s a Constitutional duty of our federal government to actively protect these basic rights defined as God-given.

So when alleged social-media monopolies stifle “problematic” actions of truly-free speech by citizens, Uncle Sam might actually be required to get up in the face of Facebook and tell them to “Knock it off!” with the censorship.

“Whatever special communications privileges we the federal govt. gave you, you’ve abused them so now we’re taking those away.”

so funny. antifa was SUPPOSEDLY due to trump yet an actual facist government does shot and antifa is silent.
makes you wonder about antifa funding.