“Freedom Convoy” is inspiring truck convoys around the works, as the truckers in Ottawa settle in for a long haul. 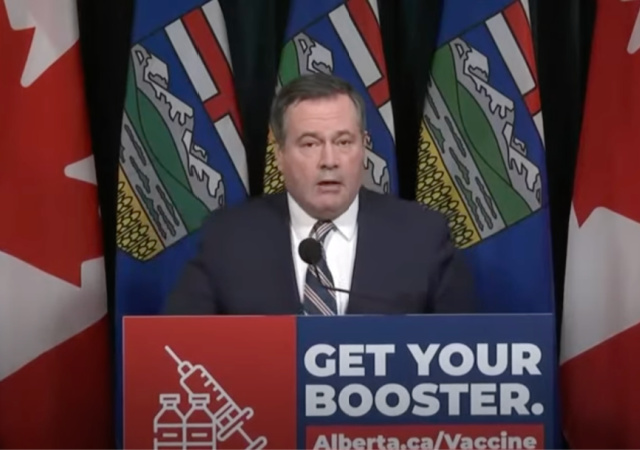 We are now at the end of the first week of the Freedom Convoy rally, which appears to be part of the two weeks we needed to flatten the curve…of emergency COVID-19 restrictions.

Earlier this week, I noted that Saskatchewan Premier Scott Moe set a target date in late February to end vaccine requirements for his province officially.

Now Alberta’s prime minister is preparing to end them as well.

The COVID cabinet committee will also lay out a phased plan to remove almost all public health restrictions later this month as long as there is declining pressure on hospitals, Kenney said in an hour-long Facebook Live.

“After two years of this, we simply cannot continue to rely on the blunt instrument of damaging restrictions as that as a primary tool to cope with a disease that will likely be with us for the rest of our lives,” he said.

The premier did not give a specific day the program would be lifted, but committed that the province would repeal the Restrictions Exemptions Program “in the first quarter of 2022.”

My colleague Mary Chastain reported that Facebook pulled the plug on the “DC to Convoy” page to organize an American version of the protest. The sensors at this Big Tech monstrosity will have to work fast, as the Canadians have inspired truckers to organize around the world.

Dozens of Facebook and Telegram groups inspired by the Canadian truckers have sprouted up across the world, from Cyprus to Argentina to New Zealand, with members expressing solidarity and shared frustration, and in some cases, even organizing convoys to their own local capitals.

…Aram Lemmerer, 39, is a business owner and an anti-mandate organizer in Austria. He told the Star he spoke to a crowd of anti-vaccine protesters last weekend and got a “roaring” response by evoking the images of trucks rolling into the Canadian capital.

“I said, has anybody seen what was going on in Canada?” he said. “And the roar you got was like a soccer stadium, crazy. The next question I ask: Shall we do the same thing in Austria? It was a wave of roar, it was insane.”

Lemmerer said he and two other organizers have a commitment of 2,500 vehicles driving to Vienna in a convoy on Feb. 13, including cars, trucks, tractors and cyclists, although he said he didn’t know how many would ultimately come. They want the current government to give up all restrictions and resign. Austrian lawmakers on Thursday approved a measure to mandate COVID-19 vaccinations for its entire population, or face a fine equivalent to more than $700.

Telegram is how I stay connected with the San Diego Local Order of Bloggers (SLOBS) members. It has worked wonderfully to keep our band of citizen activists together.

Meanwhile, the truckers station in Ottawa has no plans to go while Canada is enduring senseless and ineffective covid restrictions. One trucker noted he could stay until May.

[T]ruckers have remained defiant even as the protests entered their sixth day Thursday, vowing to stay put until Trudeau’s government flips and withdraws its policy on vaccine mandates.

The protesters, many of whom have been hauling cargo on long-distance routes between Canada and the United States for decades, are not out to make a political statement – they are simply out to make a living.

Long-haul truck driver Guy Meister is among those who joined the convoy last week after making a 20-hour journey in his big rig from Nova Scotia.

The 56-year-old, who has been at the protest since its inception, revealed he is committed to sticking it out as he does not have to return to work until May.

‘I’m in it for the long haul,’ he told DailyMail.com. ‘Trudeau has got to go.’

Meister, who has been driving a truck since he was 19, said he believes the government mandate is ineffective and that the policy will only hurt him and his fellow truckers.

He explained that if he were to bring in a truckload to the United States and return to Canada, under the current mandate, he would have to quarantine and be unable to work for 14 days, which would bankrupt him and others.

‘When I take a load into the US, I come in direct contact with very few people, if anyone,’ Meister said.

‘I back my load into the dock, they unload it, and a person puts the paperwork into my cab, all without any direct contact. It doesn’t make any sense.’

It looks like we have an interesting new social science data point: It takes two years before a significant percentage of citizens realize an “emergency state” has transitioned to a “police state.”

“Mary Chastain reported that Facebook pulled the plug on the “DC to Convoy” page ”
maybe Convoy to D.C. 2022 ?

While we are at it

“The sensors at this Big Tech monstrosity will have to work fast, as the Canadians have inspired truckers to organize around the world.”

I think you meant “censors” unless you are suggesting that they use some kind of algorithmic or employed watchdog “sensors” in order to sense dissent then engage in censorship.

Learn to read for content instead of scratching at fleas. Yes I saw all those flubs and more, but clarly understood the intent, and the information conveyed.

Typos. Isn’t that the Greek god of stenographers?

Grizzly,
Thanks for that one. I’m gonna use it the next time I send a fubared email or text!

Vote-out every hack already in government.

Jason Kenney is rather unpopular these days and if an election was held in Alberta today the socialists would either get back into power or come really close to it. Alberta’s already got enough problems economically with Trudeau’s war on oil, other natural resources, and pipelines in addition to what Covid has done, so put the NDP back in charge provincially and that combination will mean Alberta will never recover. Although an election can be called anytime, it has to happen by late May of next year, so he needs to start righting the ship now if he wants to have a chance to lead his party into the next election and win it.

My guess is that the last two will be Ontario for image (capitol and all that) and Quebec because Quebec.

I spent 2 years in Quebec… interesting place, lo. They like them some government, as long as that government speaks French

Some of the Maritimes are pretty conservative; unfortunately, they just don’t have the pocket book to make a go of it.

We spent six months each year at our home in PEI for fifteen years. There were so many good people there, but after not being “allowed” to visit our home for two years because of the joke that’s called “covid” we sold everything and got out. Too many islanders are hooked on socialism and believe every lie and piece of propaganda from CBC. One even told me years ago that “obama loves the American people” and many of our neighbours thought their wildly inadequate health system was superior to ours.

How easy will it be for them to fall to full communism!

Maybe they need to open an account on GiveSendTakeOffEh?

Don’t forgetabout Canada’s left Coast….. BC. Not current on political issues there, though I used to live in the Lower Mainland. Seems from what I’ve heard to be just about as cottupt if not more than it was when I was there.

Dog River shall lead the nation against covid insanity!

“Remove almost all public health restrictions” is a loophole you could drive a space shuttle through. I expect you’ll still have to wear a (useless) mask in hospitals and doctor’s offices. Probably on public transit and in government offices too.

Will they be abandoning their emergency powers while they’re at it?

Not unless you are willing to take them back, no.

I didn’t see BC mentioned. About half the real estate and businesses in Vancouver are owned by those fine citizens of CCPland. Doubt they are going to be in the least bit caring about the personal freedoms of the natives, and I’m talking citizens of Canuck Land.

Growing up I knew some fine folks in Manitoba just across the river from me in northern Minnesota. But that was a half-century ago, hehehehe…..

It took two weeks to get a compromise from the Communist government in Poland. …….. and what followed were nine plus years of lies, arrests and retrenchment by the government before they actually gave up power.

Jack boot tyrants do not surrender power lightly. They will tell stories and flail about; the worst is likely still to come. This could easily take years.