In Ottawa, elite government officials called tow trucks to clear away the Freedom Convoy. The move failed as all tow truck employees had come down with…covid. 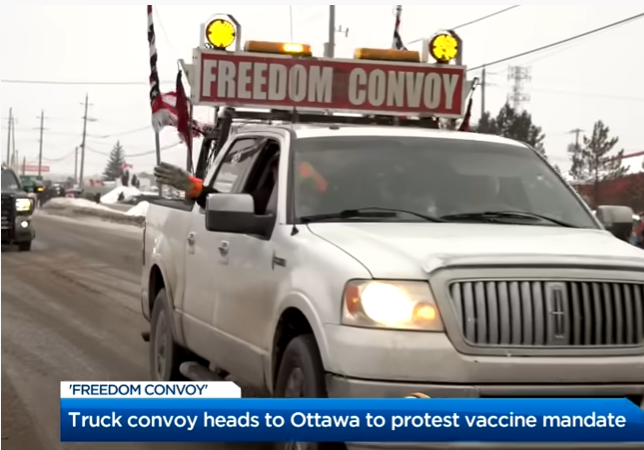 A few days ago, I noted that Canada’s Freedom Convoy scored a success when Saskatchewan Premier Scott Moe wrote a letter of support for the truckers and demanded an end to vaccine mandates.

He has now set a target date in February to officially end vaccine requirements.

Premier Scott Moe says the provincial vaccine requirement program is expected to be scrapped by the end of the month.

In a news conference on Monday, Moe made the claim that COVID-19 vaccines no longer reduce the transmission of the Omicron variant. He said that means the vaccine requirement program is no longer needed.

“People are asking their government for a return to normal, a removal of public health restrictions,” he said.

The province of Quebec had plans to tax the unvaccinated. That is until the truckers rolled in.

Quebec Premier Francois Legault dropped plans to tax unvaccinated residents Tuesday amid backlash over the effort to increase protection against COVID-19 in the Canadian province.

He announced the move during a news conference updating the public on the status of the pandemic.

…The proposed $50 to $100 fine on unvaccinated individuals was announced last month in an effort to push residents to get their first COVID-19 vaccine. The tax was not expected to apply to those with a medical exemption.

Quebec’s premier is shocked to discover that the tax was viewed as…divisive.

Legault says while his government has a bill ready to go, he’s decided not to table it after seeing “growing discontent” in the population.

“I understand that this divides Quebecers and right now we need to build bridges,” said Legault. “My role is to try to bring Quebecers together to stay united as a people.”

Still, Legault denied that he was backing down due to demands by organizers of a protest planned for Thursday in Quebec City.

In Alberta, Royal Canadian Mounted Police have declared the blockage of the US-Canada border’s busiest port of entry by the Freedom Convoy as “unlawful”.

They said “extensive efforts” to negotiate with protest organisers had failed and the force has tapped “additional resources” to make arrests or tow trucks if needed.

“While we thought we had a path to resolve this, the protesters chose not to comply,” a statement said.

The Freedom Convoy began as a call to end a federal vaccine mandate that would require unvaccinated Canadian truckers returning from across the US border to quarantine and get tested once they are home.

It has since grown into a push to end all vaccine mandates nationwide and what supporters see as government overreach on Covid-19 restrictions.

Elite government officials called tow truck companies to clear away the vehicles. The move was unsuccessful because the tow truck employees all came down with…covid.

Farmers are joining the convoy:

Lawyers are being dispatched to assist the truckers at the Alberta border.

BREAKING: We've hired lawyers to help the truckers at the Canada-U.S. border. We want to make sure that negotiations go smoothly, and to help cover the legal fees for these truckers.

Please go to https://t.co/UKU3YUzAhM and make a donation to help the truckers!

““While we thought we had a path to resolve this, the protesters chose not to comply,” a statement said.”

translation: we told them to move and the protesters didn’t like our dictates.

They tried to get them to open a lane so people who want to could get through. They have the right to protest; they do not have any right to block the highway. Nobody has that right. Not BLM, not unions, and not truckers, no matter how valid their cause is.

No one really disagrees that blocking the highway is illegal nor that it shouldn’t be investigated and prosecuted when the guilty parties are identified.
The issue many of us have is that for a year BLM and antifa conducted similar blockades even if more temporarily but repeatedly or created no go zones or assaulted federal complexes or disrupted pipeline operations or other lawful businesses. I am perfectly happy to have the govt prosecute every guilty trucker but only after the bad actors from BLM, antifa and eco groups from those prior events have been investigated, identified and prosecuted.

When any govt decides to ignore or downplay some groups protests because the members of govt are beholden to them, agree with the ideology or are simply afraid to act that failure has consequences. The govts who did so willingly chose to allow the erosion of the rule of law and damaged the social compact.

You should learn to ignore millhouse.

You should go jump in the lake.

You should learn to go jump in the lake.

This isn’t about prosecution, it’s simply about moving the trucks so that people can get through. If the truckers would just do that themselves there would be no issue. They could continue making their very just protest, with full and growing public support, rather than pissing off everyone whom they are harming.

“The whole point of protesting is to make people uncomfortable.” –AOC

No more two sets of rules.

Fine, so the next time someone does something wrong to me, I’ll go do something wrong to you. Is that how you think it should work?! It’s OK for me to key your car because someone did it to me?! I can burn your house down because BLM burned that pawn shop in Minneapolis?! Please tell me you don’t really mean that.

I agree with everything you said BUT you should be aware there is precedent in U.S. legal history that holds double standards of enforcement of law is not a valid legal defense (even if a judge could consider it during sentencing).

If you’re worrying about getting caught, you’re not committed enough,

I am not offering the very real and observable truth of a double standard in enforcement as a legal defense.

I am presenting my personal reasons which lead me to withdraw my support for any prosecutions of non-violent and non directly destructive protest acts until the ledger becomes balanced.

Again, who said anything about prosecution? What they’re doing is just not right, so they should stop. That’s all. Decent people would stop. They can’t justify what they’re doing just because other people have done much worse and got away with it. The people to whom they’re doing it didn’t do anything wrong, so you can’t claim to be holding them to their own standards.

Look up the Mohawk reservation in Quebec; they’ve blocked major roads plenty of times and gotten away with it.

So what? How does that justify someone else doing it? Murderers get away with it too. Does that mean it’s OK for me to kill someone just for fun?!

The Covid Fascists are still going for the total subjection of society, or trying to egg on ACWII.

So, based on the title, the truckers are succeeding? *big grin*

The Canuck truckers are succeeding.

My work has announced after many days of debate that they are no longer able to implement vaccine mandates. The Supreme Court shot it down, so they have no more cover. The mandates were defeated.

Now if they shoot someone up with this crap, and that someone dies from it, they are responsible both legally and financially. Once that happened, they don’t want anymore to do with it.

Let’s now have an American trucker revolt and shut down DC.

It doesn’t matter if the mandates were defeated, the emergency powers the government arrogated to themselves remain, permanently.

The RCMP declared that “all options are on the table.” Maybe one of those options is to surrender?

I heard when the rcmp asked how long they were going to blockade the border the truckers said it would probably take two weeks to flatten the curve. 🙂

“I understand that this divides Quebecers and right now we need to build bridges,” said Legault. “My role is to try to bring Quebecers together to stay united as a people.”

I bet he’s also concerned about the lower and upper portions of his neck.

“the protesters chose not to comply,” a statement said.”

“Duh,” anyone who understands what protesting is all about said.

Even calling the truckers “racists” isn’t working so we know they aren’t Republicans.

I think one reason Legault changed his mind was because it was pointed out to him who exactly is vaxxed and who isn’t. Plus this tax was part of a larger effort that included a nighttime curfew, which went over like a lead balloon. There are still plenty of Canadians who will follow every government edict in the name of trying to stop Covid (more like trying to keep the single-payer health care system from complete collapse) but there is an increasing sentiment to let people live their lives again, especially as they see what is happening in other countries.

Do most Quebecers live in the metro areas, like Montreal, Quebec City, and Gatineau (opposite side of the border from Ottawa)? Yes. But Quebec is a rather large piece of land, so it was ridiculous for Legault to impose mandates on people who live in the middle of Montreal that also applied to people living in a village of 500 people in the middle of nowhere. He was acting like a dictator and got called on it.