Video: NYC Rite Aid Closing Its Doors Due to Out-of-Control Shoplifting and Theft

Video: NYC Rite Aid Closing Its Doors Due to Out-of-Control Shoplifting and Theft

Maybe vote for people who will be tough on crime? 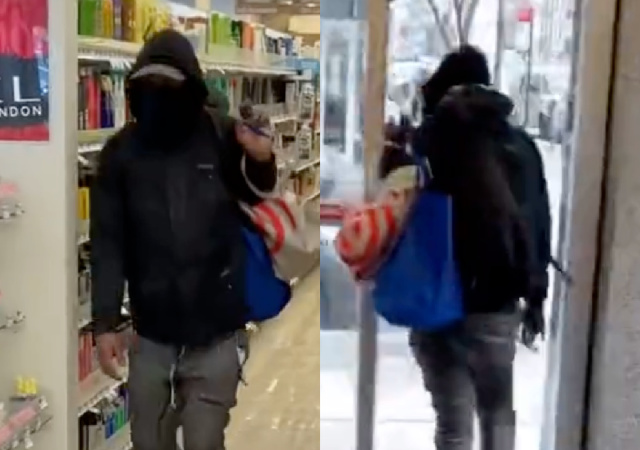 Podcaster and leftist actor Michael Rappaport put a Rite Aid in Hell’s Kitchen on the map yesterday because he filmed a shoplifter taking merchandise and leaving the store.

What did I just witness?

It turns out the store is closing because of all the shoplifting:

‘These criminals know there are no ramifications. We have to put more of these mfers in jail,’ he said.

The Rite Aid in the video, on 80th Street and 2nd Avenue, is hit with thefts of the same nature on an almost daily basis, a security guard told Rapaport. The store will be closing on February 15, and 63 other locations will close in the coming months with thefts a major reason, the pharmacy chain announced in late December.

‘You see all these videos on Instagram of people shoplifting like they’re going for a walk in the park. It’s pathetic that this is happening in the greatest city in the world,’ Rapaport said.

Well, what is the definition of insanity? Doing the same thing over and over and expecting a different result?

You vote for soft-on-crime politicians you get crime. Now people will suffer instead of the criminals:

The actor said he relies on that Rite Aid, where he buys his mood stabilizers, and that he and many others in the community are now losing their neighborhood pharmacy – and its workers are losing their jobs – because of the rampant shoplifting.

‘These people are gonna be out of a job because of guys like this scumbum,’ he said, using the invented word as a combination of ‘scumbag’ and ‘bum.’

The Rite Aid will close on February 8. Sources said shoplifters “have ripped off more than $200,000 worth of merchandise in the past two months alone.”

An employee explained: “They come in every day, sometimes twice a day, with laundry bags and just load up on stuff. They take whatever they want and we can’t do anything about it. It’s why the store is closing. They can’t afford to keep it open.”

A New York Post reporter followed one shoplifter last week. He had no problem speaking to the reporter because no one would arrest him:

But they almost never tell him to put anything back or stop him in any way, said the man, a native of Senegal who lives in the Bronx, where he is a union painter.

He said he was going to drink the beer with a friend who lives nearby. He said he’s been stealing from stores like Rite Aid for months and has never been arrested.

I mean, why bother worrying? Employees and security guards informed the Post that “their bosses forbid them from engaging the shoplifters in any way”:

“They don’t want us to get hurt,” said one employee at the Hell’s Kitchen store, citing the clerk in a Los Angeles Rite Aid who was fatally shot last year when he confronted two men leaving the store without paying.

Another clerk said the store is worried shoplifters will sue Rite Aid if a staff member touches them or threatens them.

“If we say anything or try to stop them (thieves) and the store finds out about it, they’ll fire us,” the clerk said.

“All you can say is, ‘Please, please don’t do that,’ ” said a security guard at CVS at 49th and Broadway about the thieves who come in and sometimes even tear off products that have been locked onto shelves. He feels helpless, he said, “because everyone knows we can’t stop them.”

Sister Angela, why is crime worse in one place than another?

One of my favorite war films.

I think the title is answer C

We have a winner… Robert Mitchum and Deborah Kerr. Fun B movie for the whole family. Same year as “The Enemy Below”… fighting the Axis power in both theaters…ah abroad and at home. Can we have the 50’s and the Cold War back please?

It’s Rite-Aids fault for not disguising it as a Red Wing Work Shoe store. It would never get touched.

Except for the cash register.

Closing stores near where any POC lives simply because you’re losing inventory,

It’s gonna get worse.
I used to work for a chain pizza place back in the day when checks were still a common thing. We would take checks – as long as they weren’t starter checks – lot more bouncy bouncy from new accounts – and they didn’t have a bad check previously..

We were the LAST local pizza place to accept checks – and we HAD to stop taking them because by the end more than half of them were bad checks. Every scammer or person with no understanding of how checking accounts work gave us their “business” – and every one cost us the check amount and penalty fees.

What’s gonna happen is as long as NYC treats shoplifting as a non-crime is the shameless five finger discounters will just shift to a different venue until that store closes too. Even if they have to jump a subway turnstile to do it at a place 5 minutes further away. You want to live in NYC and shop at a chain convenience or drug store? Enjoy your commute to New Jersey to pick up some milk or some decongestant Et Alia.

These @ssholes shitting where they live will make NYC even less livable than the politicians have already made it.

I don’t think New Jersey is that much better at this. It’s going to be “enjoy getting all your stuff delivered, and you better be home when it arrives, because people are going to steal off your doorstep if you’re not”.

They are robbing trains in LA how much longer until the just start robbing the UPS/FedEx/Amazon/DHL trucks. Stop them, hijack them, go through them and take what you want.
Or are they already doing it and I just haven’t heard yet.

Criminals are a protected minority. This is a great example of people getting what they voted for…good and hard. And they wonder why people flee from these communities?

As this trend accelerates more stores will close in more locations bringing some level of personal consequences to the people who voted for the politicians and policies which led to this point. Eventually some will begin to link their voting habits to real world consequences.

“The Greatest City in the World”… forget mood… anti-psychotic meds please. How to you create one of the world’s great 3rd world cities? Decay a 1st world city! I really wonder with NYC and London racing to the bottom, who ends up second to last?

That is exactly what has happened.

But why are London and NYC decaying now rather than one hundred years ago?

Just asking they question is racist.

They have been decaying for 100 years. Cities decay two ways: slowly, and then all at once.

London is nothing like NYC. The mayor is awful but the streets are clean and much safer than NY. I don’t fear for my life going out in London at night. Even Paris doesn’t feel as bad as NY and Los Angeles. It’s sad but true. I have to do business in all four cities so I’m in them often.

When one store closes they will just go to the remaining store and that one will close faster. Soon the will only boarded up store fronts and a very small tax base that formerly paid for police, fire, garbage collection, and libraries. illegal drugs will be available on every street.

There is a solution. Ask the city council to pass laws stating that store closure will require payment of a departure tax equal to all sales tax generated at the store in the past v five years. All employees let go will receive five years of severance and benefits.

That will stop the store closures.

Y’all ever investigated the federal rules for expatriating and renouncing your citizenship? Prepare to be appalled.

It’s insane. We live in Europe and are forced to pay US taxes and if we renounce (a two year waiting list) we have to sell assets and give 40% to do so. Only country in the world that does that. It makes getting bank accounts and other financial services hard because so many institutions don’t want the hassle of the paperwork to comply.

Leftism has sicked the criminal element onto society, DAs using their power to free many who would otherwise be locked up. California started it, it was only going to spread across the country.

Flee Senegal only to turn your new country into Senegal. Amazing.

As the further self-segregation happens the quicker it falls to disrepair. Funny how they gain control then defecate on their dinner plates.

That’s precisely what happens when you deliberately cut the fuel off to the melting pot.

“It’s pathetic that this is happening in the greatest city in the world,’ Rapaport said.”
Sounds like he needs to be on something stronger than mood stabilizers.

I get sick of paying extra because the privileged think they get it for free.

They DO get it for free.

“Another clerk said the store is worried shoplifters will sue Rite Aid if a staff member touches them or threatens them.”

It’s great to live in the land of the free, where our government’s Job One is to secure the blessings of liberty to ourselves and our posterity
Glory, glory, how we fool ya.

Once upon a time, there was a saying: “Crime doesn’t pay”. Now it does. Criminal behavior will continue until there is a downside, for the hood rats and/or their political apologists.

Michael Rapaport is a flaming Progressive who voted for this. Let him stew. This is what he voted for when he called Trump supporters every vile name in the book. I hope they do his house next. Sorry, not sorry….but it’s about time Progressives see what their policies cause.

If the shoplifters in NYC are not being prosecuted, then it’s unfair that I would be prosecuted here in upstate NY as well.

Disparate impact, anyone?
What could go wrong?