VIDEO: Govt. Releasing a Lot of Single Adult Migrants Into the U.S.

VIDEO: Govt. Releasing a Lot of Single Adult Migrants Into the U.S.

A source from ICE said it could be an ICE release. 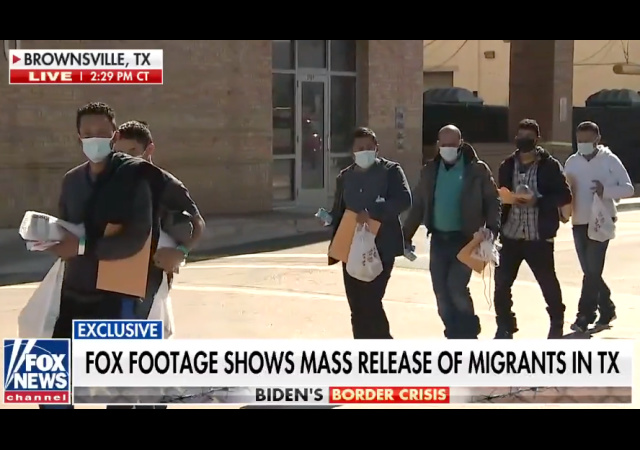 Fox News’s Bill Melugin posted numerous videos of buses dropping off migrants at a parking garage in Brownsville, TX. A black tarp with a sign saying “Border Patrol drop-off” is the only identification of the office.

Then the migrants go to a bus station or an airport to travel to their final destination.

Border patrol said it does not have a hand in the release. A source from ICE said it could be an ICE release.

NEW: We witnessed the federal gov mass releasing single adult migrants, almost all men, at a parking garage in Brownsville. Taxi cabs were then called for them. We followed the taxis to Harlingen airport, where the migrants were dropped off to get on flights around U.S. @FoxNews pic.twitter.com/HcSSwtjMnR

Single adult migrants are supposed to be expelled from the country via Title 42. CBP tells me they had no involvement with these releases. An ICE source tells me these were ICE releases. ICE tells me they are looking into it. I am awaiting further comment from them. @FoxNews

As soon as I finished typing this, another bus pulled up and is also releasing dozens more single adult men. Some of them are wearing ankle monitors. @FoxNews pic.twitter.com/1xZhlCLYd1

BREAKING: The federal government continues to mass release single adult male migrants at a parking garage in Brownsville. We’ve seen 4 of these groups in last 2 hours. Some have ankle monitors on. All being released to bus stations or the airport. Not Title 42’d. @FoxNews pic.twitter.com/mnneUNHFC1

NEW: In the middle of our live shot on @FoxNews, another group of dozens of single adult male migrants were dropped off by the federal government in Brownsville. A NGO then gave them travel folders and they walked to a nearby bus stop to travel elsewhere in the country. @FoxNews pic.twitter.com/UypXYBtrGl

Melugin said he did not see any children or families among the migrants. Some said they paid cartel smugglers up to $2,000 to cross the border.

Destinations for the migrants include Miami and Houston.

In a statement to Fox News, the city of Brownsville said its Office of Emergency Management, through federal assistance from the Federal Emergency Management Agency (FEMA), works to facilitate “the transfer of these migrants to their final destination by allowing them to use services to contact their families, NGOs, or a taxicab.”

It confirmed that the parking garage serves as a staging area for migrants to be given travel information to “facilitate their transfer to their final destinations.” Migrants can also be given a health screening there, a spokesperson said.

The government should be deporting single adults under Title 42. Biden’s administration does not use Title 42 against unaccompanied children or families.

Rupert knows his markets. He shows these maddening images between ads for Relief Factor on Fox News, and then advocates for massive immigration in The Wall Street Journal, so businesses can enjoy cheap labor at the expense of taxpayers and American workers.

A picture is worth a thousand words.

Which means that for every illegal immigrant we see a picture of, a thousand others were let in without a picture.

They might as well have “CCP” written on their backs.

I guess ICE is not going to fess up as to what the ankle monitors are for.

So we are getting to pay for our destruction by “our” government !

Where are the single women?