“With a strong job market and low cost of living, it’s a no-brainer. Texas doesn’t have an income tax, so families get more for their money” 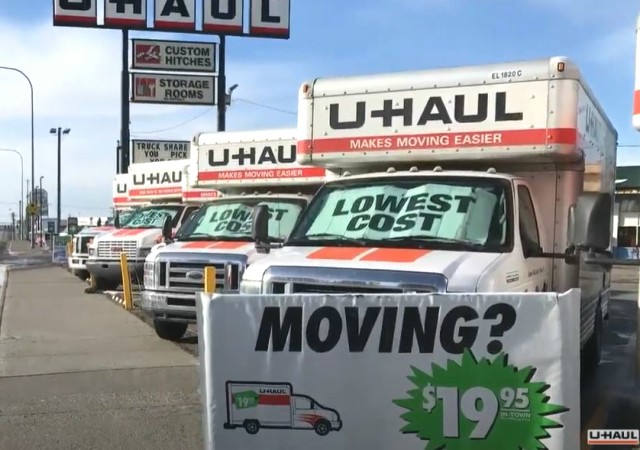 If you want to annoy a blue-state governor, one of the best ways to do it is to point out to him or her that people are leaving blue states in droves, something that has been taking place for well over a decade now and which was confirmed last year by Census numbers and again earlier this month by U-Haul’s annual growth index report.

According to their analysis, the two states that netted the most one-way inbound traffic from U-Haul in 2021 were Texas and Florida:

The Lone Star State earned bragging rights as the leading growth state of 2021, narrowly besting Florida for tops honors, according to transactional data compiled for the annual U-Haul Growth Index.

Growth states are calculated by the net gain of one-way U-Haul trucks entering a state versus leaving that state in a calendar year. Migration trends data is compiled from well over 2 million one-way U-Haul truck customer transactions that occur annually.

“We see a lot of growth coming from the East and West Coast,” said Matt Merrill, U-Haul Area District Vice President of the Dallas Fort-Worth Metroplex and West Texas. “A lot of people moving here from California (and) New York. We also see a lot of people coming in from the Chicago markets. I think that’s a lot due to the job growth – a lot of opportunity here. The cost of living here is much lower than those areas. Texas is open for business.”

The Lone Star State earned bragging rights as the leading growth state of 2021, narrowly beating Florida for tops honors, according to transactional data compiled for the annual U-Haul Growth Index.

See where your state ranked in today's article! https://t.co/EEIpC3aS73 pic.twitter.com/cP0MgPbeOE

The report did note that some Northeastern states saw some migration recovery last year, but that others were hit hard. And as for California, well, their note about what happened there speaks for itself:

Select Northeast markets showed year-over-year migration recoveries as Maine rose 21 spots, Vermont 14 spots and Connecticut 25 spots in the U-Haul Growth Index. Yet three of the six states with the largest net losses were also in the Northeast: New York (45), Massachusetts (47) and Pennsylvania (48).

California remained the top state for out-migration, but its net loss of U-Haul trucks wasn’t as severe as in 2020. That can be partially attributed to the fact that U-Haul simply ran out of inventory to meet customer demand for outbound equipment. (Emphasis mine)

Like her colleague Mike Merrill above, U-Haul Company South Austin president Kristina Ramos pointed out that there are very good reasons why so many people are choosing to move to Texas.

“The Texas economy is growing fast,” she stated. “With a strong job market and low cost of living, it’s a no brainer. Texas doesn’t have an income tax, so families get more for their money.”

Not surprisingly, Texas Gov. Greg Abbott (R) took to the Twitter machine to do some bragging:

This measures the net gain of one-way U-Haul trucks entering a state versus leaving that state.

In addition to leaving blue states for economic reasons, pandemic lockdowns over the last two years also caused an influx of people from blue states to red states as people got fed up with state government overreach on issues like mask and vaccine mandates as well as the “emergency orders” that effectively shut small businesses down, some of them for good.

While red-state governors love touting data like this, there are problems that oftentimes come with these migrations, as other states (like North Carolina) have found out the hard way. Simply put, a lot of people fleeing blue states come to red states and then push for the same types of big government policies that led to their original cities and states becoming so overly-regulated and expensive to live in in the first place.

As I’ve often said, I welcome people visiting my state, because I happen to think it’s the best state in the country. But if you’re the type of person who comes here to live because the cost of living is cheaper and yet turn around and push for the very types of social programs and laws/regulations that causes taxes and the costs of everything else to go up, then you can do us all a favor and just visit and then go back home – and stay there. I feel so strongly about this that if I was my state’s governor, that caveat would appear on all “Welcome to North Carolina” signs.

Great! Now how do we organize and educate people that the results on the demand side described herein are not some fluke, but a product of judicious, limited government? And that the supply side is due to the opposite?

The real FEAR is blue contagion. Once they fouled their nest, they move to another to repeat the same progression to dysfunction. They will miss their sense of compassion and uber-caring and vote for more of it…again. Of course, the bluest of the blue will congregate and create bluish ghettos. Hopefully not…. I had a friend who moved to Texas but didn’t buy any cowboy boots. He is now in Oregon. Redness is a blue disinfectant.

Full disclosure… I graduated from NCSU …before it went wokish.

It’s what New Yorkers, Massholes, and like minded did to California.

Here’s a good test: Did a former Blue resident move to your Red town because they were fed up with how things were going? Or… were they brought in by an employer?
If it’s the latter be very afraid as they haven’t learned anything and will immediately begin trying to turn their new community into their old community.

The South has a saying:

I haven’t heard that one in years.

Or like touring rock bands. They blow into town, demand to book the most deluxe suites, then trash them.

These liberals are the most hypocritical on urban development policy. They block all new development in their blue cities, sending housing costs through the roof. Then their children have to flee to red states to afford housing, where they then vote to thwart those “greedy capitalist developers/gentrifiers” from building upward in “their” city.

What counts is political power, as in losing House seats. I do not see much of that happening, because that is based on residents, which includes incoming illegals without U-hauls – as in flown into White Plains, NY in the night by the Feds.

You won’t see it happening for most of a decade, because we just finished a census.

Not all who flee blue states are looney libs. A lot are conservative refugees tired of of the BS. In 2021 we finally escaped the corruption of Ill-annoy and are settling down in TX. Got tired of the corruption, of RINOs who say one thing to the voters and then just let the Ds steamroll them. Unless pigs start flying, my kids will have a better future here than in the Prairie State.

We left in 2011. Went to Idaho. Bought five acres with a two year old house, four stall horse barn, small riding arena with an office built in for $375,000. I could not afford to buy it today. The CDA area is being overrun with Californians and the price of housing is insane. I just hope the newcomers are conservative. I worry about that as I already see a difference in things. Shopping at Costco used to be fun. You could not get out of there without three or four conversations in the aisles and another with the checker! Now people just blow by you – just like they did in California.

welcome to a new life under the lone star

One thing about the article is wrong. The Blue State governors are not at all sad to see this exodus. THEY ARE DRIVING CONSERVATIVES OUT.

The Babylon Bee did a comic on it; fighting liberals by fleeing.

We’ve had so many friends bolt to TN, FL, TX, Idaho and they are all at least as conservative as us. We’re biding our time before we go.

Watch Zillow- prices have as much as tripled in these red states. We’re watching TN (everywhere but libtard nashville) really closely. A year ago 850 would have bought a NICE 4-5000 sq ft house with a pool and a giant shop on 5 acres with a long asphalt driveway. Now… forget about the pool, the shop, and the asphalt driveway and the house won’t be as nice.

Forget about Florida… if we end up there, it’s going to be during the next housing crash because those houses are priced like dot com stocks in 1999 (the bubble months).

“One thing about the article is wrong. The Blue State governors are not at all sad to see this exodus. THEY ARE DRIVING CONSERVATIVES OUT.”

The blind and bigoted.

Both Seattle and Portland have high median incomes. They keep voting for this and they out vote all the other voices in both of those states.

You might want to decline living in or extremely close to Knoxville/Oak Ridge. Instead, consider getting away from town about 20-30 miles. It’s a lot quieter, homes are mostly priced the way they should be, and the locals are still sane. Only problem is the long drive, but the roads are good and everybody drives on I-40/75 like that well known “diminutive winged rodent flying out of the land of perpetual midsummer.”
.

Our neighbors moved to Afton/Chuckey last spring and are LOVING it compared to the land of drug addicted zombies and woke government in Western Washington. They were raving about the quality of schools. Both of their grade school kids were really far behind partly due to the woke idiots running our schools who spent 2020 dividing the community with BLM/George Floyd tirades (and also the fact that they both work and couldn’t put in the time to compensate for the lack of results from the school district.) Not only were they able to get extra support from the school district they were easily able to enroll in summer school (provided for by the school district). Both kids are caught up now.

The REAL kicker is.. their house in Afton/Chuckey is about 2x the cost of our house here (real nice) and they pay less than HALF the property tax than we do and also less in sales tax. Also no state income tax.

I don’t think this migration is going to end anytime soon. I’m heading out this spring/summer to do some recon on the area.