“The photos, published exclusively by the Daily Mail, show a maskless Swalwell tending to his infant son as he spoke with a female friend in the lobby of the luxurious Loews Miami Beach Hotel.” 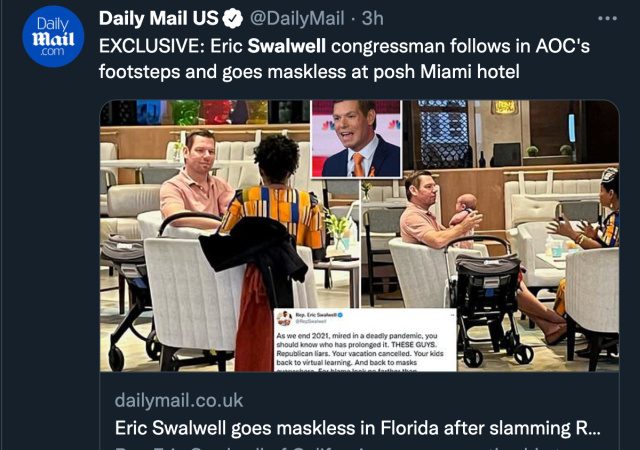 Last week, Rep. Alexandria Ocasio-Cortez was caught maskless in Florida. She was called out for it and reacted like a middle-school girl.

Now Democrat Rep. Eric Swalwell of California has been caught maskless in Florida. It’s almost like these Democrats don’t want to live by the rules they want to impose on everyone else.

Rep. Eric Swalwell, D-Calif., who claimed last week that Republicans had “prolonged” the COVID-19 pandemic, was photographed maskless as he vacationed with his family in mandate-free Florida. California is one of the most locked-down states in the nation.

The photos, published exclusively by the Daily Mail, show a maskless Swalwell tending to his infant son as he spoke with a female friend in the lobby of the luxurious Loews Miami Beach Hotel.

In a tweet last week, Swalwell blasted Republicans and claimed they “prolonged” the “deadly pandemic” which led to school closures and family vacations being canceled.

“As we end 2021, mired in a deadly pandemic, you should know who has prolonged it,” Swalwell wrote. “THESE GUYS. Republican liars. Your vacation cancelled. Your kids back to virtual learning. And back to masks everywhere. For blame look no farther than #TheseGuys.”

As we end 2021, mired in a deadly pandemic, you should know who has prolonged it. THESE GUYS. Republican liars. Your vacation cancelled. Your kids back to virtual learning. And back to masks everywhere. For blame look no farther than #TheseGuys. pic.twitter.com/v3S43HKPVZ

Here’s the photo of Swalwell:

If Swalwell truly believed his own rhetoric about COVID, Florida, and mandates, he would not take his maskless unvaccinated baby to Loews Hotel South Beach during the Omicron case surge in Miami.

Naturally, he tried to pass it off with some of his trademark sarcasm:

They got me! Maskless, juggling a baby and a coffee while meeting with a Congolese queen. Pulitzer please! https://t.co/ai3RmuGM4q

Just one minor detail, you're in the Free State of Florida and not in the locked down hellscape of California you represent. https://t.co/SJrBWRO16a

Again, the people telling you to be scared of Covid manage to go to the places with the least restrictions and prove how unconcerned they are.

Replace your mask between sips is the California standard, Gramma killer! https://t.co/bin8ZJk9Ld

The Defiant L’s account does the side by side:

When Eric Swalwell isn’t enjoying the free state of Florida, he is over on MSNBC pushing conspiracy theories about an election that hasn’t happened yet:

“I’m worried that if Republicans win in the midterm elections that voting in this country as we know it will be gone,” Rep. Swalwell says. “This is not only the most important election, but if we don’t get it right, it could be the last election.”https://t.co/wxolbGaa9n

I would say that I don’t understand how people like this get elected, but I live in Massachusetts and Elizabeth Warren is one of my senators.

This is being corrected by changes to how the PRC prepares its female spies to become Swalwell arm candy. They have developed a novel virus they administer to their agents that, upon infection, cause them to lose their sense of smell, or so I am told.

and, apparently, their sense of taste

At last — a valid explanation for COVID!

Met him when he came into NH years ago. What an idiot. A gun dealer made him look like a fool over his stupidity on the topic. .

Politicians know that masks are useless in stopping a virus, but useful for their political narrative..

Low information fools do not get it.

This guy is such an insufferable, zero-intellect ass and is a member of the United States Congress. This twit luxuriates in top notch hotels on the tax payer dime and wields power at the national level. This airhead is everything that is wrong with allowing dopey, ill informed morons vote to give people like him the job he has.

I used to live in his district….Swalwell replaced the nut job Pete Stark. So, crazy person replaced crazier person.

How are the Chicom honeypots going to find him if he’s wearing a mask all the time?

They will use their sense of smell.

The positive thing is that as the strident types like AOC and Swalwell are caught maskless in FL, which they helped demonize as a Covid hellscape the narrative crumbles a bit. Combined with past examples of the elites going maskless at large events and the many examples of high profile 3x vax becoming infected this works to counter the establishment narrative of certain doom if we don’t follow the rules.

Mojito? You snob! This is Margheritaville. Oh, and we like beer. 😛

Florida? Arizona is the capital of tequila country. I was reaching for something a little more… offshore communist for our boy, Eric.

“A Congolese Queen?” Don’t tell me — she’s holding a vast sum of money she’s prepared to share with you if you just give her your bank account details.

Bwahaha! She rarely makes a public appearance, preferring to ply her scam via email, but she made an exception for one of the most gullible lunatic in Congress.

She made a personal visit, due to Fang Fang’s recommendation that Swallwell had the most “golden tongue” she had ever found… in the intelligence community.

My guess is that Swalwell is not really “the best” Fang Fang ever had, though I feel certain she convinced him he was. Kind of like convincing AOC that the only reason Republicans don’t support her is that they can’t “date” her. The delusion runs deep on the left

Was he married when he was doing Fang Fang?

She “ruved him rong time,” at least until he gave her the heads up (bad choice of words?) that the jig was up.

“You got me?”, his party has no shame. Yes, we got you loud and clear.

Californica really turns out some hypocritical tools for politicians.

And I say this being in Massachusetts.

Best topical cartoon today:
“I’m too sexy for my mask!”