“Biden, once a man of the Senate, has long supported the filibuster. That’s now changed.” 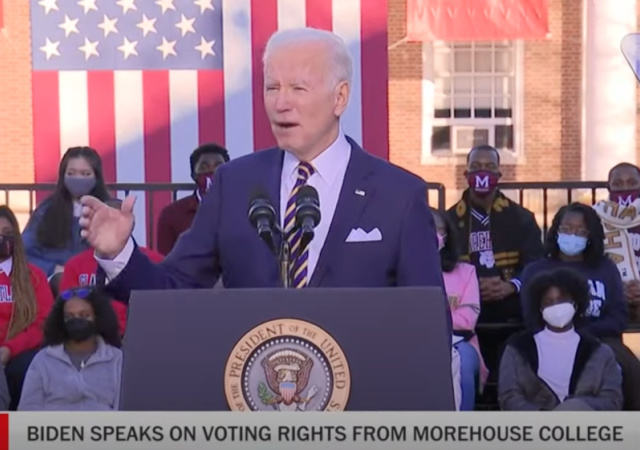 Charles Lipson is professor of political science emeritus at the University of Chicago. Like many others, he was unimpressed with Biden’s speech in Georgia last week.

He writes at The Spectator:

The little president who cried racism

President Biden’s wisdom and penetrating intelligence sometimes escape him. So far, they have stayed away for fifty years and show no signs of returning. They are often accompanied by wild exaggerations, invented personal stories and hyperbolic attacks on opponents.

Examples are not hard to find, and the public is catching on. The latest fulmination came during a campaign-style rally in Atlanta on Tuesday, aimed at supporting his bill to nationalize election laws. Since that bill contravenes America’s long, constitutionally enshrined tradition that state legislatures control voting rules (as long as they don’t violate individual civil rights), the bill will fail in the Senate, blocked by the filibuster.

Despite Biden and Schumer’s efforts, the filibuster will remain. What prevents a change? The votes of all fifty Republicans plus two Democrats: Joe Manchin of West Virginia and Kyrsten Sinema of Arizona. The other Democrats have attacked them without mercy.

Nobody pretends that anything Biden says means anything, except Pravda.

Perhaps President Biden was betting upon a ground swell of grass roots support that would get the two Democratic Senators to change their positions. That did not happen, but he can tell the left wing of the Democratic Party that he tried everything.