“Shawn Laval Smith, 31, was arrested after a tip led police to a bus stop in Pasadena on Wednesday morning” 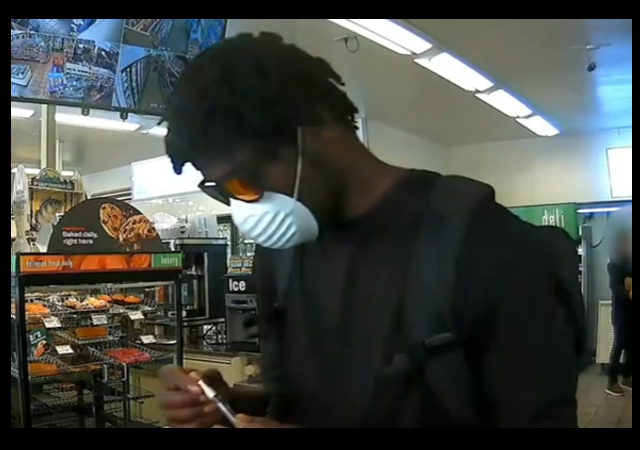 Yesterday, I noted that under Los Angeles County District Attorney George Gascón, the region’s “smash and grab” problem has morphed into “slash and dash,” as an unknown assailant fatally stabbed a University of California (UCLA) grad student while she was working as a consultant at a high-end furniture store in Los Angeles.

There was an update to the case: The homeless man caught in the video was identified by Los Angeles police. He is a career criminal out on $1000 bail.

Shawn Laval Smith, 31, was named by LAPD on Tuesday night as the suspect captured on video in chilling footage as he calmly purchased a vape pen from a 7-Eleven 30 minutes after the cold-blooded murder.

‘He should be considered armed and dangerous. If seen do not approach, call 911,’ police said in a statement.

Los Angles County Sheriff’s Department records list Smith as currently free on a $1,000 bail from a misdemeanor arrest in October 2020.

…The suspected killer has a lengthy criminal record, with dozens of prior charges in North Carolina and South Carolina.

Smith’s prior charges include assault with a deadly weapon, carrying a concealed weapon, assault on a police officer, trespassing, possession of a stolen vehicle, and misdemeanors for larceny and possession of stolen goods.

More information is coming out about the events surrounding the slaying.

Police released video Tuesday from a 7-Eleven store, showing the alleged stabber casually shopping 30 minutes after he killed Kupfer. He was also shopping at other stores before and after the killing, police said.

The suspect was seen leaving the store through a back door and fleeing into an alley, heading toward Oakwood and La Brea avenues.

Police said there is no known motive to the stabbing.

Officers said Kupfer instantly had a bad feeling when the suspect walked into the store.

“She sent a text to a friend saying there was someone inside the location that gave her a bad vibe.

And then another development, an arrest:

Shawn Laval Smith, 31, was arrested after a tip led police to a bus stop in Pasadena on Wednesday morning, a day after authorities offered a record-breaking $250,000 reward for information leading to his capture, police said.

“I can confirm officers from Pasadena PD did take Mr. Smith into custody earlier today,” Pasadena Police Lt. William Grisafe told The Post. “We had been notified by a community member, that they believed the wanted person was at the bus bench located at Colorado Blvd. and Fair Oaks Ave.”

The liberal DAs and judges pat themselves on the back for keeping another criminal out of prison. Meanwhile, crime ravages our cities and every so often it boils over and an innocent, contributing member of society is killed for no reason other than the justice system’s refusal to perform its function. A father lost his daughter to decades of apathy from Californian courts. How many need to die before they fight back?

Perhaps we should see the names of who posted bail, who approved the bail. who proposed the laws that enabled this POS to be loose on bail. and any other people who has fingerprints on this crime.

And, just think if she had been armed?

When fathers fight back, Gascon and Garcetti do everything they can to lock up the father.

This sort of thing has gone on since Bernie Goetz and before. The law abiding are required to accept collateral damage in the name of “bail reform”, and “a fair justice system”.

This is especially true when The Exalted Minority is on the receiving end of that swift and sure justice.

Similar record to Floyd’s. Look at his color; he will end up being a victim of the white law abiding citizens. You’ll see. Don’t be surprised when you see Nancy Pelosi kneeling before him asking for forgiveness.

Homeless broke ass felon. Who the hell paid his bail for all those arrests? Nothing happened in the $50k bond case since November 2019?

From the link to Mail.com posted in the story:

Smith is also currently free on a $50,000 bond in Charleston, South Carolina in relation to a November 2019 arrest on suspicion of firing a weapon into an occupied vehicle, court records show.

He’s one of Hillary’s super-predators.

Welcome to the Democrat/BLM dystopia.

If you’re wondering who the democrat party will choose to replace Kamala Harris, it’ll probably be the likes of this animal.

Anyone betting against him either not being prosecuted or being released on a PR bail?

Gascon will have him back out on the street by the weekend.

Did I miss the announcement that he is mentally ill?
Or haven’t they trotted that out yet?

If Kupfer had “died of Covid” in any possible way (it could still be a claim I suppose), the Democrats would want to indefinitely lock up thousands of innocent people regardless of any laws or rights. Here, some people (they should have public names) are already working on setting Smith free to do more harm.

It’s time to remove from office, those DA’s, Police Chiefs and politicians, who turn a blind eye to the death and destruction caused by their insane belief their policies are just.

Not in liberal cities.

These Soros backed DA’s must be challenged by law and order conservatives at the ballot box…… and when the conservative wins they .must clean house of all the deputy DA’s who did not resist the political evil their boss perpetrated on US citizens.

There should be an arrest warrant for Soros for conspiracy to commit genocide. Great Society my @SSSS

Does Gascón file charges for theft of a life on which he places no value?

Lemme get this straight: Black career criminal murders white girl in cold-blood and gets arrested….without incident?

I know that block well. I haven’t been to LA in about 10 years, but when I visit I usually spend a lot of time in that area. It’s a nice part of town, or at least so it has seemed every time I’ve been there.

Has anyone stopped to consider that Kupfer’s design concept for Smith’s crib violently clashed with his expectations?

Have you stopped to consider what an absolute ass you are?

a textbook example of a perpetrator deserving capital punishment

instead, the people will foot the bill(assuming, of course, he’s convicted)to keep him housed, fed and alive for the next twenty years or so

and of course ms. kupfer will still be gone–just sickening