Believe all women, you guys! Except when an alleged groper is a powerful man. 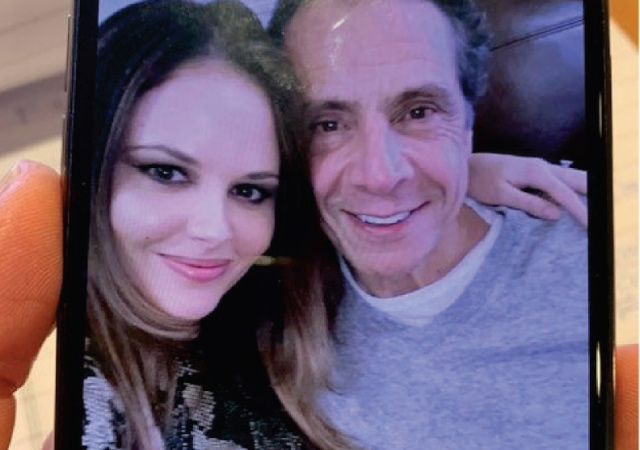 “Albany County District Attorney David Soares announced today that a thorough and independent review of the investigation into the allegations against former Governor Andrew Cuomo has concluded,” the DA’s office said in a statement.

“While many have an opinion regarding the allegations against the former Governor, the Albany County DA’s Office is the only one who has a burden to prove the elements of a crime beyond a reasonable doubt. While we found the complainant in this case cooperative and credible, after review of all the available evidence we have concluded that we cannot meet our burden at trial,” Soares’ statement said.

“As such we have notified the Court that we are declining to prosecute this matter and requesting the charges filed by the Albany County Sheriff be dismissed.”

Cuomo should have been arraigned in Albany City Court on January 7th on sexual assault charges against former staffer Brittany Commisso in 2020.

Commisso claimed, “Cuomo pulled her in for a hug, reached under her blouse and fondled one of her breasts in the Executive Mansion in Albany on Nov. 16, 2020.”

You can read Comisso’s complaint against Cuomo and view the exhibits (including the featured image) at the LINK to the New York attorney general’s office.

Four district attorneys have decided not to pursue cases against Cuomo for sexual assault and the elderly who died in nursing homes.

Here a list of all the DA’s (so far) that have been dropping cases against Andrew Cuomo despite “credible” and “deeply troubling” evidence: @WestchesterDA @NassauDA @AlvinBraggNYC @DavidSoaresNY.

Last week, Cuomo was let off the hook by the Westchester County DA’s Office for inappropriately touching a female state trooper and smooching a random woman during separate incidents while he was in office despite “credible evidence to conclude that the alleged conduct in both instances … did occur.”

“However, in both instances, my Office has determined that, although the allegations and witnesses were credible, and the conduct concerning, we cannot pursue criminal charges due to the statutory requirements of the criminal laws of New York,” Westchester County District Attorney Miriam Rocah said in a prepared statement.

On Monday, the Manhattan District Attorney’s office dropped its probe into Cuomo over allegations that he mishandled nursing homes during the initial coronavirus outbreak.

As far as I can tell we still do not have any comments from the Manhattan offices. A source told The New York Post that outgoing DA Cyrus Vance Jr. “quashed” the case last Thursday.

Thankfully, I guess, the feds still have their investigations into the sexual assault and nursing home deaths against Cuomo.

I say I guess because I don’t have faith in the feds either.

Believe all women, though!

Was there ever a doubt?

Says, “Let that be a lesson. Next time we will slap your hand.”

The Albany DA?! When did that happen?

There you go, stating fact. So, a down tick for you! (Not mine)

I don’t think the down ticks are related to what he says so much as how he says it. Ya know? (I miss my Friendly Grizzly, when did you go all Gentle?)

It was a long process. He was a viking for awhile. Retiring from that he returned to his roots of being a Grizzly, this time a Gentle one.

There was no need to prosecute him since he’s already out of office. Getting him out of the way was the whole purpose of having the scandal in the first place. It’s done.

And, since he hasn’t been prosecuted, he’s free to “rehabilitate” his image sometime in the future. As far as the grandees of our ruling class are concerned, this is the way it should be. All is well.

But…but…when a Republican is accused the Democrats are always quick to tell us that no one is above the law. Is it possible that there is a two tiered system of Justice? Oh my. /sarc

That’s another good call. It’s a shame it has to be motivated by corruption instead of due process requirements, which are largely gone for metoo stuff.

If there’s no police report filed at the time, it didn’t happen. Women change their minds and an instant police report is a good indication that there was no mind changing. Lacking that, it’s most likely opportunism.

I’ve said for a very long time that the college sexual assault tribunals and this metoo crap were doing a huge disservice to women that were actually the victim of sexual assault.

It’s trained them that they can wait months or even years, tell a story with no actual evidence, and somehow expect results. Made 10x worse by the laughably obvious lies and bullshit revenge stories by women trying to get even with men.

The FACTS are that if a sexual assault isn’t reported to the police within 24 hours, the chance of a conviction falls to effectively 0%, regardless of who actually did the assaulting.

Like Elizabeth Holmes, who suddenly disclosed she was raped during her ever-so-brief time at Stanford, during her securities fraud trail.

Unless you are some average poor schmuck who cannot afford real attorneys like the ones who spearhead legal insurrection, then the accusation of ANY sex crime is also the conviction.

I understand that this is a political attack so other Democrats could campaign for his office.
The funny thing is, he’s really the only Democrat with national standing who could conceivably run for president in 2024.
So by going along with this witch hunt, the Dems have shot themselves in the foot.

This is adorable! Imagine thinking that granny-killer tyrant Cuomo would be a viable national candidate. So cute! He’s a disgusting, ill-spoken, talentless, uncouth, corrupt, sexual predator, but yeah, I guess given the Dems’ standards he’s a “winner.” Except they shot him down (or as you put it, they shot themselves in the foot). Sit down and think really really hard about why he’s not a viable presidential candidate for Democrats. You’ll get there.

They are stuck with Kamala. And that’s just fabulous.

Sounds like you want to date him. Hat tip AOC.

He’s not in jail, so he’s still a viable candidate for THEM.

“While we found the complainant in this case cooperative and credible, after review of all the available evidence we have concluded that we cannot meet our burden at trial”

Maybe you should hire some more ambitious DAs, like Fatman and Flufferboy. They aren’t stopped by mere quibbles like that.

But it’s all about who promotes the narrative and who attacks it, isn’t it.

One sided judicial system, Democrats in good standing will never be charged.

Waiting for the comments from outraged feminists. . .

Alyssa Milano will not be heard from. #metoo when it’s useful.

Sounds like they are using this as a preface to rewrite and ramp up Draconian measures of lawfare capable of taking down any political enemy they want at any time.

Cuomo groped a boob — move on!

Now, about the grannies he killed…

So now he faces no charges whatsoever….This was all a charade to get a male democrat out of office in favor of a female democrat. Interesting. What is the obsession with letting libtard women overrun our government? That man should be going down on sexual assault and murder charges!!!

Considering the D.O.J. is headed by a Democrat, I don’t see anything coming of the federal investigations either. The Democrats wanted a woman in that office and that’s what they got, so it’s a done deal. What is with Democrats wanting to let these women overrun the government???

Satan: “I’ve sent an army there to terrorize the citizens. They will smash, rob, murder and rape. I’ve sent my lawyers there too to ensure my soldiers never do a minute of jail time. I’ve sent my other demons there as well to tear down and silence anyone who dares speak against me or the other social evils I’ve unleashed. All the civil servants and tax collectors work for me too. It will be a fabulous hell on earth.”

God: “They had free will. They chose. They are yours now. You can have them.”

No Democrat who was a DA, US Attorney of AG would ever indict or ever prosecute Cuomo to a verdict in a courtroom -they would be satisfied with salacious headlines that rendered Cuomo politically expendable and sacrificed for the approval of the woke left -This is why the justice system will spend millions of dollars of tax payers on fishing expeditions against anything and everything related to Trump but not a nickel on a governor who has the blood of Covid victims on his hands.