Protest at school board was over demands to restore school team names: “We are offended by the Board of Education’s removal of the TOMAHAWKS mascot name AND the process by which it was removed and replaced.” 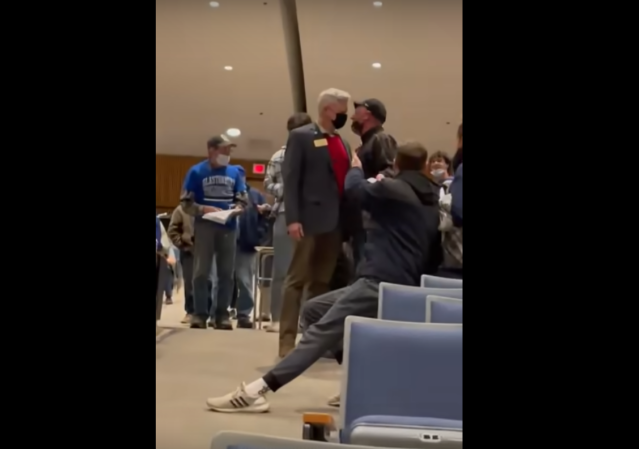 In a meeting of the Glastonbury, CT, School Board on December 14, video shows what appears to be a board member leaving the stage to physically confront a member of the public. The confrontation occurred during a recess of the meeting, after the member of the public made a comment about the board’s previous decision to change the high school mascot over concerns about cultural insensitivity.

The meeting was a petitioned meeting of the board called by the citizens of Glastonbury.

According to local media:

Of the nearly 40 residents that spoke during the public comment portion of the meeting, only one got into a contentious back and forth with the board members.

A board member told resident Mark Finocchiaro “your time is up” to which he responded, “This is the history of our town,” referring to the Tomahawks name.

The Board member shot back, “You’re not paying attention.”

“You’re not paying attention, but they are,” said an angry Finocchiaro, pointing to the audience, before dropping an expletive.

That ended the public comments.

During a recess, when the Board was supposed to be voting on the request to restore the Tomahawks name, those in attendance said Board member Ray McFall came off the stage to confront Finocchiaro.

The entire incident was recorded on a cell phone, showing the two men, face-to-face, with Finocchiaro yelling directly into the board member’s face.

The cell phone video appears to show McFall pushing Finocchiaro, and then Finocchiaro punching McFall in the face. This followed a verbal altercation in which tempers flared:

Miranda Beach, a resident can be heard saying to McFall, “That’s unprofessional, why are you swearing at a citizen?”

Then, Finocchiaro said to McFall, “You’re in my face?”

After the punch was thrown, the crowd separated the two, and McFall was brought back onto the auditorium stage.

The meeting resumed, only for the chair to immediately call it adjourned due to the altercation. Police arrived shortly thereafter. An investigation into the incident is ongoing.

Another witness, Town Councilman John Cavanna, said members of the community didn’t appreciate the manner in which the board adopted the name change in August 2020. All meetings at the time were virtual, shutting the public out of the process. At the time, the board agreed that the mascot was offensive, but residents circulated a petition calling the board into a petitioned meeting to reconsider the vote.

TO: The Glastonbury Town Clerk

We, the undersigned qualified electors of the Town of Glastonbury, hereby present this petition requesting that the Board of Education host an IN PERSON hearing to allow every elector an opportunity to provide their input in person on the following:

We were not afforded the opportunity to provide meaningful imput in person during the period of the Covid pandemic and related shutdowns on the matter of the Glastonbury High School (GHS) TOMAHAWKS mascot name which was desired to be cancelled and changed to another name by a select group of individuals from within and outside the Glastonbury community. Glastonbury residents – students, student-athletes, alumni, business owners, taxpayers – who genuinely care either way about our GHS mascot name are in favor of retaining the TOMAHAWKS mascot name of the Guardians by a wide margin.

We are offended by the Board of Education’s removal of the TOMAHAWKS mascot name AND the process by which it was removed and replaced.

We request that the Board of Education take a step back and listen to the vast majority within the Glastonbury community and reconsider and then reverse its decision which was executed during the Covid pandemic.

By State of Connecticut bylaws, the Board of Education must host a hearing within three (3) weeks of receiving this duly signed petition ….

After the altercation, the meeting ended with no vote on the mascot and no subsequent meeting scheduled.

The altercation can be seen here:

Why didn’t the private meetings violate an open meeting lae?

I’m outraged. The appropriate response to a push is a double leg take down followed by a conversation on the floor.

A kick to a kneecap works…

After viewing the video, I’d say a punch to the face worked quite well in this instance. Perhaps this could be used with legislators who edit text messages in Democrat inquisitions to create a false narrative of what was truly said, i.e. Adam Schiff. This is the 3rd time this POS has been caught doing this. One would think a perjury charge should be forthcoming, but a punch in the face to Mr. Schiff would work nicely in its absence.

If naming a school after an Indian (eg Chief Joseph Middle School) and its athletic teams are “The Braves,” how is that somehow disrespectful? There are dozens of schools named after MLK, and we don’t see legions of the Woke protesting about how disrespectful that is.

Here is the reference I omitted:
https://www.denverpost.com/2021/11/03/colorado-sued-american-indian-mascot-ban/

I find it amusing that all these wokists seem to think that cultures routinely name their institutions and teams after people they don’t have some sort of respect and/or admiration for.

Maybe we should suggest Slime Mold for the next team mascot.

I dunno. The Mighty Amoebas has a nice ring to it.

I like the Lowly Worms. Eat dirt. Crawl to victory.

I always chuckle when I think of the Key West High school mascot, which is basically a snail

When I first moved to Tennessee, I found myself wondering why a college would name a football team after a desert rodent; one not even native to the area.

Back in the ancient days when I was going to college, there was a thing called Metropolitan State College in Denver. Now it is Metro State University and has a large and expensive built up campus near downtown. When I left CU, my job and apartment were near Metro, so I transferred there. MSC had no buildings or land of its own then, so it leased empty office spaces all over downtown Denver for each class each quarter, which made going from class to class interesting sometimes. MSC basically was a college for working adults who wanted to get their degree part time around their jobs, with most classes at night.

The Colorado State Board of Agriculture [which controls all colleges and universities with “State” in their names], wanted it to grow up to be a real university with as big a bureaucracy as possible. Those of us who were supporting our families and trying to finish our degrees had other priorities.

The Board of Agriculture, in an attempt to build school spirit, took a survey for school mascot names [we did not have any teams or school sports]. We voted for the “Fighting Artichokes”. They backed off for a couple of years after that.

It is time to replace CRT in schools with mandatory classes in cell phone video photography.

“Everybody has a plan until they get punched in the mouth.”

Watching the video, I notice that after Fall pushes Finocchiaro who in turn punches Fall, someone can be heard repeatedly asking “Are you drunk?” of someone. It’s unclear to whom that question is asked, but some in the crowd apparently thought it was okay for Fall to assault Finocchiaro by pushing him in the chest with both hands, but that Finocchiaro was somehow out of bounds by defending himself.

Remember the sequence when Garland’s Secret State Police use this incident to justify labeling parents as domestic terrorists.

Tall McFall could use a little more therapy. Nice to see a jackass have his ass handed to him, meaningfully. At a guess, I’m thinking that “Italian?” fellow would have tore his ass up, given the opportunity.

I had so hoped to see Al Sharpton rendered before a group of his peers, one day.

When McFall is voted off the board, he can run for his local HOA board. Same energy.

Why all the hostility, man? Just call them the Brandons. Imagine the cheers of….

Hell yeah man. Once you lay hands on me I am free to level your stupid azz.

He’ll feel that for a few days

He only gave the Board member half of the old one two. First a punch in the face to knock him down, then a kick in the slats—or wherever. Board member would be singing soprano for a while.

Just so you know how this is being reported, at least in the reporting I’ve seen, the MFM narrative is that the resident punched the school board member in the face. Leaving out, of course, everything that led up to that.

American Pravda is doing its job. Another “domestic terrorist” created.