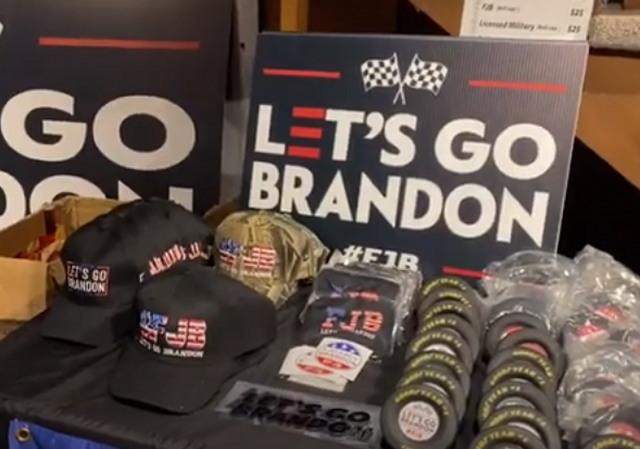 Inflation is making this a difficult economy for many people but not everyone. The ownner of the ‘Let’s Go Brandon’ stores reports that his business is doing so well that he is expanding.

We mentioned his latest shop in a recent post.

Who knew New England was such a hotbed of dislike for Biden?

Owner Keith Lambert told FOX Business he plans to expand his business into Salisbury and Cape Cod, Massachusetts – increasing his locations from eight to 10 to keep up with the demand during the Biden presidency.

“A customer came into one of our locations [Tuesday] and bought a Let’s Go Brandon sticker and went out to his car and stuck it over his Biden sticker,” Lambert said. “And that was it, he was just like, ‘I’m done with this guy.’”

The phrase, “Let’s go, Brandon,” took the internet by storm in early October after an NBC reporter at a NASCAR Xfinity Series race incorrectly reported that fans in the stands were chanting “Let’s Go Brandon” following a victory by driver Brandon Brown, when they were really shouting, “F— Joe Biden!” The phrase has since become a wildly popular anti-Biden rallying cry, breaking out at concerts, sporting events and even churches.

Taylor Giles of the Daily Caller has more:

Lambert believes his stores will be successful for a long time to come, Fox Business reported.

“They always get so upset, so there’s always going to be a slogan, a phrase, and the Trump brand isn’t going anywhere,” Lambert reportedly said. “People still buy lots of Trump merchandise, and especially if he runs again, I’m sure we’ll be able to stay open and keep moving with that stuff.”

Reaction to the stores has been mixed, according to Fox Business. Lambert has even allegedly received death threats for himself and his family for the stores’ name.

The store looks so pleasant inside:

This week, progressives on Twitter were trying to push the hashtag #LetsGoBrandonReallyMeans in order to counter the meme, which suggests it really bothers them.

They should send a 50% off coupon on any purchase to Biden.

As long as Lambert doesn’t send 10% of every sale to the Big Guy. 🤮

This puzzles me. I’m lifelong here in Massachusetts (age >70) and all I’ve ever known is Democrat government. Our so-called R governors (like Mittens himself, Charlie Baker) have all been Democrat-lite.

So to see this store succeed to the point of expanding has me asking, “The buyers in these stores? Have they not been showing up at the polls for years and years?”

It truly is pathtic. MA was one of the Original 13. As was NY, DE, NJ, and others. These have gone to the dogs.

They show up. But they’re vastly outnumbered. If Lambert had 50 stores, he’d probably be overextended… but there should be plenty of trade for 10 properly distributed stores to serve the otherwise completely deplatformed community of voters craving a highly visible way of saying, “I’m Not With Stupid.”