This Is Why We Fight – 2021 Legal Insurrection Year-End Fundraiser

This Is Why We Fight – 2021 Legal Insurrection Year-End Fundraiser

My letter to readers and supporters 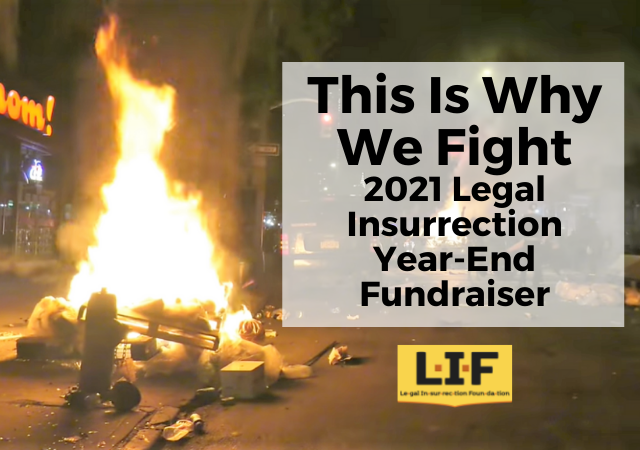 This past year may have been an inflection point for the nation and the Legal Insurrection Foundation (LIF).  The theme of our year-end fundraiser is Why We Fight. Donations are tax-deductible to the full extent allowed by law. You can DONATE HERE.

My fundraising posts normally are very different than the fundraising emails we send out. But this year, the letter to readers and supporters is what I want to say. So here it is:

I write to you with a sense of alarm. Our nation is under attack from within by people and groups who seek to tear down our society. You know it. I know. And they know it.

You may remember my caution written back in 2017:

“I don’t know if there are any uncorrupted institutions left that matter. The education system, from public grade school through public and private higher ed, is gone. The frontal assault on free speech on campuses is the result. If you think this is just a Humanities and Social Sciences problem, stay tuned. In 3-5 years, if we’re still here, we’ll be writing about how the social justice warriors have corrupted the STEM fields. It’s happening now, it’s just not in the headlines yet. There is a rising tide of absolutism in ideas and enforcement of ideological uniformity that is palpable.”

I wish I was wrong, but I was right.

The intolerant and totalitarian campus culture now has migrated to corporate America. The mainstream media, Big Tech, and corporate HR departments are the enforcers.

Fear grips our nation. Multiple surveys show the majority of Americans are afraid to express their political views openly. People self-censor for fear of job loss or online harassment.

I get it. I know what it’s like to be a target, which has been my existence almost since the day I started Legal Insurrection website in 2008, and of course, in the immoral panic of 2020.

I also know how important supporting each other is. We are in this together. That’s why ever since Legal Insurrection’s founding, we have focused on coming to the assistance of people under attack, be they students, faculty, or just people caught in the crossfire.

We are immensely proud and honored to have been able to tell many of their stories and share them with you.

Earlier this year, we launched CriticalRace.org, which has become the most authoritative source on CRT in education, cited and linked in dozens of publications and media outlets. We were able to dig deep and create a well-sourced and documented core resource that others can use — and have used — to fight back. 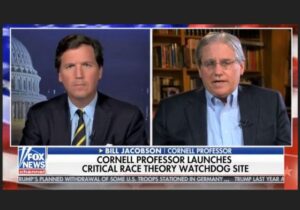 We have focused increasingly on K-12. We changed the national discussion when we brought forward two figures who quickly rose to prominence. Nicole Solas is a mother who has been harassed, bullied, and sued for seeking information about CRT in elementary schools.  Ramona Bessinger is a middle school teacher who described the terrible impact of her school’s new race-centric curriculum. They both told their stories for the first time at Legal Insurrection.

This is what we do best — finding stories before others do, bringing them forward and pushing them to national (and international) prominence, altering and disrupting narratives. We are fighting every day, in ways seen and unseen, giving aid and comfort to others standing up to this repressive culture.

As we have since inception, we continue fighting the Israel-haters. It’s one fight. 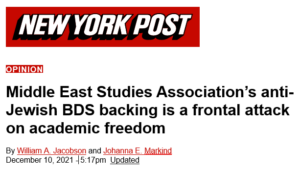 While the situation is dire, do not give up hope. You are not alone. The playbook on how to go on offense and seize the momentum against destructive forces was rewritten this year.

Everyday citizens who spoke up and fought back were The Big Story of 2021 and will be a bigger story in 2022. The parents’ rights movement reflects a true multi-party, multi-ethnic, multi-racial awakening and we are part of it. We will have a big announcement related to that early next year.

We can’t leave the Nicoles and Ramonas, the students and faculty, and each other, to fight these battles alone. Yet we cannot handle the volume of requests we receive or launch all the projects we want because we do not have the resources. We operate on a shoestring budget compared to other organizations. We could do so much more with your help.

By donating today, you can change that and join the rising tide of Americans who are pushing back hard to save our freedoms and liberties. Ronald Reagan once spoke of a time for choosing. “We’ll preserve for our children this, the last best hope of man on earth, or we’ll sentence them to take the last step into a thousand years of darkness.”

This is why we fight. And your support makes it all possible.

Like I have a choice. I was thinking rendering aid

I was just thinking about 7 December. Y0u might think ill of me. Don’t.

LI certainly took to the offense this year and made a difference. I keep waiting for more commenters to get on board. We are done with being polite and genteel. Leave that to the 19th hole GOPe squishes. This is a war we have been losing it because “lies travel half-way around the world before the truth can put its pants on”. And never seem to be able to get our pants on.

We mustn’t wait until we have an airtight legal case before we get into the fight. We go with what we have and hit them with all we’ve got from the start. Make THEM explain themselves. Make THEM hurt. Let’s get them out of our lives starting with getting them out of our neighborhoods, schools, wherever they are. Make them hurt.

We have them in a panic. All of the useful fools are re-appearing throughout the Uniparty. This weekend was the obnoxious NJ blimp Chris Christie and Lindsay Graham. But our former Vice President skipped the Army-Navy game to avoid the FJB/LGB chants. Soon Trump and DiSantis will be rolling out and it will be huge. The tide is turning and we ALL need to get on board.

An inflection point is where the third derivative has an isolated zero crossing, e.g. the graph’s curvature changes sign. Might be steeply going up still, or down.

A shear flow is unstable at an inflection point of its velocity profile.