The case was expedited and oral argument held November 1, but it’s been sitting there without decision yet as Texas abortion procedures were cut in half. 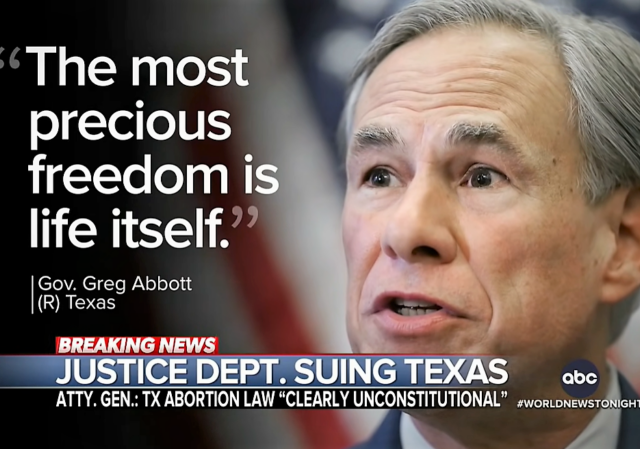 With everyone focused on the Mississippi abortion law that was argued on December 1, 2021, the other big abortion case in the U.S. Supreme Court has fallen off the media radar despite being argued on November 1, 2021.

That case involved the Texas Fetal Heartbeat Law, which was a consolidation of two cases:

SCOTUS agreed to treat the case as “expedited” on its docket.

The U.S. Supreme Court is hearing oral argument today in two cases challenging the Texas fetal heartbeat law. The law bans abortion after a fetal heartbeat is detected, but leaves enforcement to private lawsuits. The lack of government enforcement power previously caused SCOTUS to refuse to hear the case.

See this post for background on how we got here, Texas Fetal Heartbeat Law Still Beats, Supreme Court Leaves In Place But Agrees To Expedited Review….

My quick take is that the Justices will find that federal courts have the power to enjoin the law, likely by enjoining the clerks from filing and processing lawsuit. It’s not that anything specific was said, but the entirety of the argument was that the law was designed to evade federal court review through the unique private enforcement mechanism while at the same time achieving the result as if the state were empowered to enforce the law. I think it will be close, but that’s my feeling.

BTW, Texas Solicitor General Judd Stone was superb in his argument — outclassed the other lawyers by a lot. Whether it makes a difference remains to be seen.

One reason for that feeling is that Kavanaugh worryied that a similar ploy could be used against other right, such as the Second Amendment, and he used the example of a state providing a private enforcement mechanism with a $1 million damage provision for anyone who sells an AR-15….

Since Roe v. Wade was not on the docket in the Texas case, unlike the Mississippi case, and because an emergency stay of the Texas law was sought, you’d think it wouldn’t take SCOTUS over a month to decide. But it has.

Maybe the decision will come tomorrow, or take longer.

Regardless, it’s not a good sign for the pro-Roe team in the Mississippi case that a majority of SCOTUS appeared to be in no rush to rule on a law that has reduced abortion procedures in Texas by half.

Taking a long time on the convoluted standing issue. Not on the merits of the facially unconstitutional law.

On what basis is a woman’s bodily autonomy and choice denied in the second and third trimesters? Roe and Casey are unconstitutional laws.

That said, a human life, barring Her Choice or her Choice, is viable from her first heart beat. Through a process of reconciliation, an innocent life cannot be subject to capital punishment. Planned Parent/hood is a wicked solution for light, social, redistributive, and fair weather causes.

There is no mystery in sex and conception. The Pro-Choice religion denies women and men’s dignity and agency, and reduces human life to a negotiable commodity.

And the law doesn’t prohibit her from having an abortion, just no licensed doctor can perform it w/o penalty. No one is out to penalize the mother; another lie of the left media

stl, I think you need to fact check yourself there. A number of states have prosecuted women for inducing abortions, and in recent years.

It seems to me that the majority of justices are thinking thatit makes more sense to delay this decision until they’ve decided what to do about Roe. If they overturn it then the Texas law is automatically valid and they don’t need to deal with the questions unique to it.

Could go the other way too. They might be sitting on it, so they can limit Roe, and strike the Texas Heartbeat law together as an olive branch to the Roe folks.

As has been pointed out, the heartbeat law is essentially a way to get around the courts, rather than pass a law. While I know the left routinely outsources the law to private entities, that doesn’t make it proper or just.

Roe, Roe, Roe your baby down the river Styx. #HateLovesAbortion

How would you even obtain standing in this case? You are only “harmed” if the baby is born, right? That’s going to be an awkward talking point down the road for the mom/parents.

You just said the magic word “harmed”. If it were up to me, I would find any law that permits civil actions without actual harm or damages to the plaintiff are unconstitutional. That would fix the S. B. 8 wagon as well as some similar stupid laws (there’s one in California concerning false advertising) that effectively deputize non-involved parties to sue for statutory damages even though they suffered no actual harm. The whole idea behind these laws totally sucks.

How to justify it? I can’t figure out the legal reasoning, but I would somehow find a penumbra of emanations of the necessary due process required in the constitution to justify it. After all, that penumbra thing worked for Roe vs. Wade. Right?

But then again, maybe not for much longer.

Moreover—what is the redress for the harm of a baby being born?!

Termination of all parental rights for the crime of seeking to terminate the pregnancy. Seems fair to me anyway. Put the kid up for adoption with “undisclosed” under every item on the birth certificate except time, county and state.

I suspect the supremes don’t really want to deal with the S.B. 8 injunction because without the cooperation of the Texas State judiciary, it could get incredibly messy. It’s not clear that a federal judge can enjoin state court judges from hearing state court cases within their jurisdiction. And as for state court clerks, they basically work for the state court judiciary, so trying to enjoin the clerks without similarly enjoining the judges seems like a bit of a stretch. This would be like saying, hey, a federal judge can’t order a state legislature not to pass a particular bill or prevent the governor from signing it into law due to state sovereignty, but he can enjoin their clerks and office staff from doing the paperwork in order to prevent those things from happening. Frankly, the Texas state judges, if they feel their authority is being trampled and get ornery about it, might just simply ignore the injunction and see what happens, leading to a bit of a showdown.

There is a better way to handle this, but it will require legislation similar to anti-slapp statutes, expanded beyond 1st amendment rights, making it an actionable civil offense to sue somebody in state or federal court for the purpose of violating any of their basic civil rights and liberties (not just free speech rights).

The case is about the legal structure of the penalties, not abortion.

Yes, but all that depends on the premise that states can’t restrict abortion before viability. If that changes then the whole basis of this case changes with it. So it makes sense to wait and see what happens in Dobbs.

The political importance of the case is showing that Republicans can’t be trusted in state legislatures when it comes to abortion. The solution being vote democrats in.

For when Roe is overturned.

Texas case gets remanded in light of decision in Dobbs. Both will be released at the same time.

Texas case gets remanded in light of decision in Dobbs. Both will be released at the same time since the inevitable dissents in the Texas case will otherwise all but broadcast the decision of the court in Dobbs.

I don’t think the Dobbs decision will wait until the last day of the current term in June. If abortion is getting kicked back to the political branches and to the states, there is little reason to delay so my prediction is late winter.

Sheesh digging out yet another legal penumbra under the 9th amendment is hard work. Give them a break

Perhaps, the Court will consolidate it for decision together with the recently argued case that dealt with the Mississippi statute on abortion.

Kavenaugh’s 2A reasoning has one flaw -there is no “right to abortion” in the constitution. While I don’t like abortion, we don’t have a majority with the “oo”‘s to outlaw it. I think the mississippi law is a good compromise and should be upheld as the maximum restriction. It keeps it a federal issue (left would hate it to be returned to the states entirely) but puts more pressure on “potential parents” to consider their pregnancy protection choices ahead of time. With all sorts of prevention or immediate post fertilization options, its a wonder that the left has an argument with the 15 day rule. Most of their arguments suggest that the female is not wanting any pregnancy at the time, but ‘just couldn’t resist that urge”. You’d think she’d want to end it immediately vs. weighing her options for many months after the process has started. Waiting only causes more pain and resentment, especially for the unborn.

“Kavenaugh’s 2A reasoning has one flaw -there is no “right to abortion” in the constitution.”

Kavenaugh has proven to be a moron.

Maybe SCOTUS is waiting for the Texas courts to decide on state level constitutional issues. If the TX Supreme Court rules that the legislature cannot grant standing to individuals who aren’t harmed, then SB8 is moot.

Conservatives should oppose that “private action” component. Be VERY careful what you wish for!

My actual first thought is that the decision is already made, but Roberts doesn’t feel like it will look good for his “legacy”, but can’t find a way to brow some of the justices into changing their decision to get what he wants.