Question for oral argument on November 1 focuses on DOJ standing: “May the United States bring suit in federal court and obtain injunctive or declaratory relief against the State, state court judges, state court clerks, other state officials, or all private parties to prohibit S.B. 8 from being enforced.” 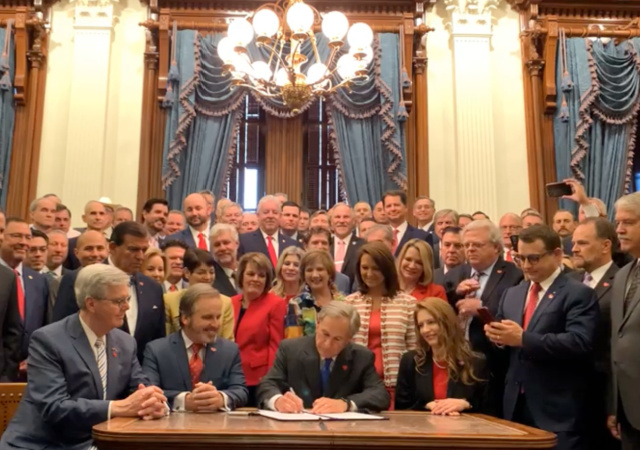 The Texas fetal heartbeat law is still beating. At least until November 1, 2021, when the Supreme Court will hear oral argument focused on whether the federal government has standing to sue. Remember, lack of standing has sunk many a case, including the challenge by Texas to the election results in other states after the 2020 election.

The DOJ sought an emergency stay of the law which bans abortions once a heartbeat can be detected, but leaves enforcement to private law suits. The lack of government enforcement power previously led SCOTUS to decline to take the case, but the procedural posture has changed since then and it’s back before the court.

The Supreme Court Order today deferred ruling on the stay, and instead ordered oral argument for November 1 (emphasis added):

Consideration of the application (21A85) to vacate stay presented to Justice Alito and by him referred to the Court is deferred pending oral argument.

In addition, the application is treated as a petition for a writ of certiorari before judgment, and the petition is granted limited to the following question: May the United States bring suit in federal court and obtain injunctive or declaratory relief against the State, state court judges, state court clerks, other state officials, or all private parties to prohibit S.B. 8 from being enforced.

Justice Sotomayor was the sole dissenter (in part):

For the second time, the Court is presented with an application to enjoin a statute enacted in open disregard of the constitutional rights of women seeking abortion care in Texas. For the second time, the Court declines to act immediately to protect these women from grave and irreparable harm. The Court is right to calendar this application for argument and to grant certiorari before judgment in both this case and Whole Woman’s Health v. Jackson, No. 21–463, in recognition of the public importance of the issues these cases raise. The promise of future adjudication offers cold comfort, however, for Texas women seeking abortion care, who are entitled to relief now. These women will suffer personal harm from delaying their medical care, and as their pregnancies progress, they may even be unable to obtain abortion care altogether. Because every day the Court fails to grant relief is devastating, both for individual women and for our constitutional system as a whole, I dissent from the Court’s refusal to stay administratively the Fifth Circuit’s order.

The stakes are high. Texas is asking the Court not only to leave the fetal heartbeat law in place, but also to overrule Rowe v. Wade and Planned Parenthood v. Casey. Amy Howe writes at Scotusblog:

Lawyers for the state of Texas urged the Supreme Court on Thursday to leave a Texas law that imposes a near-total ban on abortions in place. “Neither the federal government nor abortion providers are entitled to demand Texas write its laws to permit them to be challenged” in federal court before they are enforced, the state told the justices. But if the court opts to review the merits of the law on an expedited basis, Texas continued, it should use the case as an opportunity to overrule the court’s landmark decisions in Roe v. Wade and Planned Parenthood v. Casey, establishing the constitutional right to an abortion.

Remember when Democrats cheered Texas’ lack of “standing” in the election litigation? What goes around comes around. Maybe.

These loons on the left have an issue you to take out an animal with a beating heart to eat but a live baby is a sacrament.

If it comes down to Roberts, Roe and Casey will stand and the Texas law will be struck down as not a tax.

Roberts would rule that Abortion was a Tax! But, before that happened he would find that no citizen of the United States of America or Member of the Government has standing in this case.

It probably doesn’t come down to Roberts as he would be on the losing end of a 5/4 decision if we only were concerned with him in the current 6/3 CT make up. With the elevation of ACB to replace Ginsburg he isn’t the swing vote. The best he can do to limit the decision of five Justices is to join and use his prerogative as Chief Justice to assign or write the majority opinion.

The real question is are there five votes or will this be another case of Thomas and Alito writing well articulated and logical dissent which strongly state their opposition to the majority opinion?

It might just be an autocatalytic reaction and not a heartbeat. You’d have to distinguish.

If there’s a heartbeat, abortion becomes murder.
Most people (excluding Sotomayor and AOC) are able to understand this.

Anyone who supports abortions has to believe the above. And more. To justify their murder of an unborn child. And that’s the truth.

Well said Mr. Lucifer Morningstar. Though your name is reminiscent of an evil personage, your words are those of an angel from heaven.

Even the devil shall quote scripture.

Yes. When a person becomes an “other” it makes anything unpleasant they do not just palatable but admirable.

Not just with abortion but the left dehumanizes everyone for everything. They think their opponents are abhorrent and do not understand the irony of their disgusting behavior.

Now we’ll find out whether “standing” was just a dodge or an actual thing with the SCOTUS. Will it apply the current rule to the Left as they did to us:

Before the crisis the case was not ripe, no standing.
After the crisis, the case is moot.

“Before the crisis the case was not ripe, no standing.
After the crisis, the case is moot.”

Perhaps the system is rigged.