Upon the statue’s removal, workers reportedly discovered a time capsule from 1887. 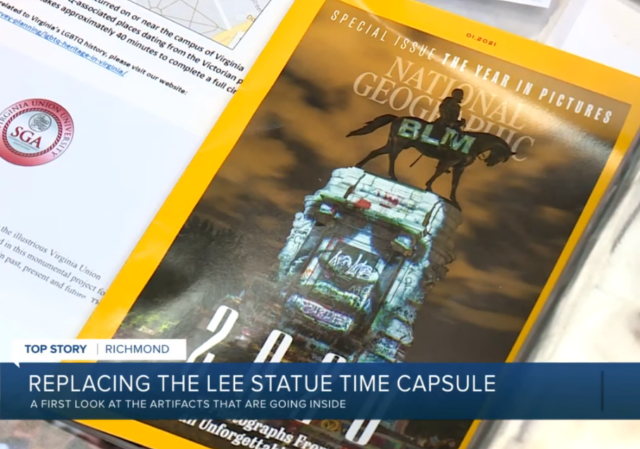 Virginia, led by soon-to-be-former Dem. governor and wearer of blackface (or maybe a KKK hood) Ralph Northam, removed a statue of Confederate General Robert E. Lee from (what was once a tourist destination) Monument Boulevard in Richmond. Because of course.

Upon the statue’s removal, however, workers reportedly discovered a time capsule from 1887.

The statue depicting General Lee mounted on a horse was officially installed in its entirety in 1890, and the time capsule was reportedly discovered in the tower portion of the statue.

Crews that have been working to dismantle the pedestal on Monument Avenue that once held a statue of Robert E. Lee believe they have discovered the 134-year-old time capsule said to contain historic artifacts.

According to Governor Ralph Northam’s office, workers noticed something that looked “different” Friday morning, so they chiseled down with a hammer and found the top of what appears to be the time capsule — located inside a large block, under one inch of cement.

It was found approximately 20 feet in the tower portion of the pedestal, not in the pedestal’s base where crews spent nearly 12 hours searching for it back in September.

. . . . Historians believe a time capsule was placed in the cornerstone of the Lee pedestal on October 27, 1887. But an attempt to find uncover it after the Lee statue was removed from the pedestal was called off when no discoveries were made.

Records from the Library of Virginia suggest that 37 Richmond residents, organizations and businesses contributed about 60 objects to the capsule, many of which are believed to be related to the Confederacy.

Some reports claim the capsule contains things like coins and pamphlets and possibly a rare photo of President Abraham Lincoln in his coffin.

If this is confirmed to be the time capsule, Northam said it will be transported to the Department of Historic Resources, so it can be opened using best practices for historic preservation to maintain the integrity of the artifacts.

Personally, I find this entirely fascinating and would love to learn what was discovered to have been included in this time capsule.

But I would take whatever is in there with a giant grain of salt given what radical leftist Northam admin “officials” have reportedly included in their ‘replacement’ of the 1887 time capsule—location to be determined since they desecrated this historic monument—with one of their own: a 2021 time capsule containing a Covid vaccination card and a Black Lives Matter bumper sticker.

Officials created a new time capsule to replace the one from 1887, even though it was not discovered at the time. The new capsule contained things like a COVID vaccination card and a Black Lives Matter sticker.

The items in the new time capsule were chosen by officials from 150 submissions that the public participated in.

It is unclear where the new time capsule will lie once the pedestal is completely removed.

Anyone digging up this time capsule in 2155 would get a seriously skewed view of 2021 America where vax cards are far from the norm and BLM support has cratered among all demographics, including among blacks.

One item unlikely to be included in the new time capsule: 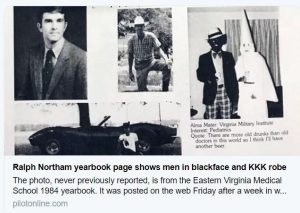 Just goes to show: leftist revisionist history is temporary, but comedy is forever.

What a laugh people will get seeing this garbage in the future.

I had the same reaction when I read that, except I was hoping they would be amazed and laughing at just how gullible and ignorant some Americans of this era could be.

Please God give us the strength and grace to mature out of these FUBAR times better than ever as humans and as a nation.

Don’t forget to include this hilarious story:

there is no virginian either before or since with the stature to dishonor robert e. lee

a soldier’s soldier, a gentleman’s gentleman, true to his duty and his faith–respected then as he will be forever

VIRTUE SIGNALING TO THE Nth DEGREE

The only people who care are the Woke who put such much stock in these empty gestures. The statue is gone. The pedestal itself has no meaning.

Or…by the time the new time capsule is opened, English will be an “unlanguage” ..purged from the future equivalent of Chinese or Arabic Newspeak.