The Roll back demanded by Russia would leave Poland, Baltic states without NATO protection. 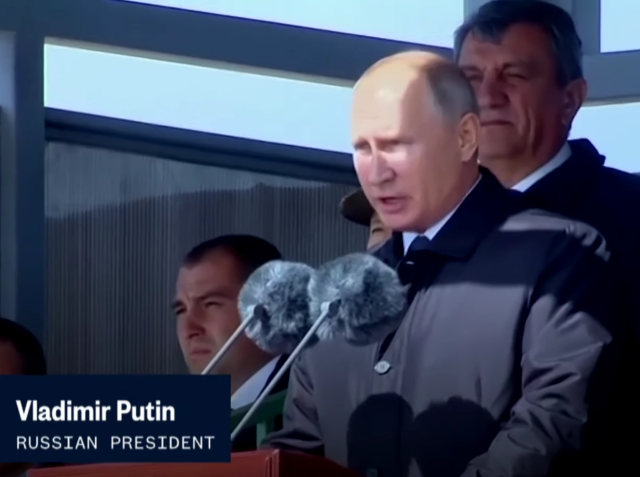 Amid massive Russian military deployment on the border with Ukraine, President Vladimir Putin has demanded a NATO roll back in East Europe.

On Friday, Moscow published a list of demands addressed to the United States and the NATO that calls for an “end to NATO military activity in eastern Europe, including Ukraine, the Caucasus and Central Asia” and “[n]o expansion of NATO membership, particularly to Ukraine,” Germany’s DW News reported citing the Kremlin document.

The NATO roll back demand by Moscow would mean that countries like Poland and Baltic states would be without the NATO’s protection in case of a Russian military aggression — the very countries Stalin’s Soviet Army invaded under the Molotov-Ribbentrop Pact of 1939. Russia demands “the withdrawal of multinational NATO battalions from Poland and from the Baltic states of Estonia, Latvia and Lithuania that were once in the Soviet Union,” the Reuters noted.

The Associated Press reported Kremlin’s sweeping demands to the West:

Russia on Friday published draft security demands that NATO deny membership to Ukraine and other former Soviet countries and roll back the alliance’s military deployments in Central and Eastern Europe — bold ultimatums that are almost certain to be rejected by the U.S. and its allies.

The proposals, which were submitted to the U.S. and its allies earlier this week, also call for a ban on sending U.S. and Russian warships and aircraft to areas from where they can strike each other’s territory, along with a halt to NATO military drills near Russia.

The demand for a written guarantee that Ukraine won’t be offered membership already has been rejected by the West, which said Moscow doesn’t have a say in NATO’s enlargement. (…)

The publication of the demands — contained in a proposed Russia-U.S. security treaty and a security agreement between Moscow and NATO — comes amid soaring tensions over a Russian troop buildup near Ukraine that has raised fears of an invasion.

The NATO and European powers fear a Russian incursion as Moscow deployed close to 100,000 troops at its border with Ukraine in recent weeks. A newly publicized U.S. intelligence report also warns of an imminent Russian invasion of the former Soviet republic. “U.S. intelligence assesses that Russia could be planning a multi-front offensive on neighbouring Ukraine as early as next year, involving up to 175,000 troops,” The Reuters reported Monday.

Another Kremlin demand is that “[n]either Russia nor the United States can deploy nuclear weapons outside their national territories,” the DW News reported. This will have a major geostrategic implication as China rapidly expands its atomic adrenal and nuclear weapons delivery systems.

Putin pushes hard because he has no reason to fear retaliation from a POTUS who can only remember his own name for a few minutes after his afternoon nap.

We do not have power in our country anymore. On the federal level, we are ruled, not governed. Just ask any voting machine or ‘mail-in’ ballot.

It’s a tough pill to swallow, but better to accept it now, and work towards freedom than be completely enslaved later.

And that’s what makes Biden dangerous Irv! If Russia does something dumb Biden will have to do something even dumber to save face. And we should all be worried about what that something dumber could be!

Biden will (secretly) demand that Russia write him a big check. Once he is paid, Biden will scold Russia and end our military aid to Ukraine.

RUSSIA PROPOSALS NOT ALL BAD

The proposal that there be no deployment of Nukes outside of national borders seems fine – as long as submarine deployment is permitted.

NATO Expansion to Ukraine seems like a provocation. Russia has legitimate security concerns regarding such a move. If you know Russian history – you understand their concern.

HOWEVER – in total, these proposals are going to be DOA and Russia knows it. Russia has the upper-hand in eastern Europe and they will not sit around while NATO and US degrade their security situation. Now that they have an Alliance with China – they have protected their rear from action by China and can devote military resources to reversing the NATO encroachment on their border.

NATO and US have no good military options. Only sanctions and Russia is protected from sanctions due to their Alliance with China (they can import any western goods they want from China).

This strategic cluster-f*ck has been building for a long time. Neo-cons considered Russia defeated b/c the USSR broke up. So, US policy makers and Intel community pushed and pushed to take advantage of Russia weakness as they regrouped. They treated Russia as a defeated adversary. Instead of turning Russia into a friend – we kicked them when they were down. BUT Russia was NEVER defeated. Now they hold a grudge.

We have to be realistic. Problem is Progressives are not realistic.

Many things are all coming to a head –
. >> Taiwan, Iran, North Korea, Ukraine, Baltic States. Poland.
. >> Also the Marxist insurgency in the USA (to which Biden turns a blind eye – and even takes steps that support it)

Yes, there is a Marxist insurgency. 52% of young people view Socialism favorably. 45% would have no problem voting for a qualified socialist candidate, according to polls taken in July 2021.

Many national organizations like BLM are run by outright Marxists and they are fully supported by at least one major political party. They are successfully using race and gender to promote a Marxist agenda.

They have opened borders to millions of desperately poor who they know the country cannot employ and who will then become highly receptive to a Marxist message (those who have nothing are always receptive to “spread the wealth” messages.)

Even if a conservative wins in 2024, the social dynamic now favors a Marxist take over by 2030. Some states will resist. But Marxist always crush the opposition. Just look at the heavy handed approach to the Jan-6 rioters. Now imagine what they will do to real resistance.

Only way to stop this is a major turn around – such as actually deporting millions who have no right to be here and have no job prospects – except for taking jobs of people already here and at a fraction of their pay. “Beggar thy neighbor” is not just a concept that applies to trade between countries any more. Maybe we should change the term to “beggar thy citizen”.

Those under 30 are almost all indoctrinated to see Marxism as equal to, if not better than, Capitalism.

Truth is, economic research has shown that a mix of these two systems is best. But Marxists want to tilt that mix toward socialism and they do not want just an economic system – but also a political system based on Marx’s teachings.

How has anything Marxist functioned well in the United States – other than disfunctionally?

I refer to the social safety net. Not really “marxist” per se. It is a degree of socialism.
> I should have been more precise in my post.

The title “INDOCTRINATION SUCCESS” – does not mean anything positive for America. It means the Marxists insurgency has succeeded in penetrating deep into American society. 10 more years like this and this country and its 250 years based on principles of personal liberty are gone. Marxists are relentless.

This is a battle of hearts and minds. It is only won through education. Showing how Marxism is deceitful – promising the utopia of equality that never comes. Capitalism is a flawed system – but it is based on harnessing human self-interest to achieve a better society for all.

Here is a report about the July 2021 Poll that was referenced in my last post.
https://www.forbes.com/sites/bowmanmarsico/2021/07/01/socialism-capitalism-and-candidates-updating-attitudes/

And the Iron Curtain returns.

No. End of discussion.

French fries smothered in gravy don’t get to make demands.

Not accurate. Russia is not demanding “the withdrawal of NATO multinational battalions from Poland and the Baltic….” Go read the Russian MFA’s statement: they propose a ban on provocative military exercises in a to-be-agreed-upon zone along NATO’s eastern border. Reuters inserted that this measure “implies” removal of said battalions, which is a stretch, and which somehow got reported as fact. Poland and the Baltics will not be left defenseless. A little less hysteria, please.

Didn’t mean this as a response to your post.

Anyone else notice Putin didn’t pull any of this shit when Trump was president? He also behaved ‘reasonably’ well for most of Bush’s tenure. It wasn’t until Bush took an absolute beating in the 2006 midterms, becoming a political cripple as a result, did Putin begin ramping up his war machine again.

When it became clear Obama was going to crush McCain, Putin invades Georgia in August of 2008. Throughout Obama’s tenure and now Biden’s tenure, Putin has been on a property taking spree. If he gets his way now, Poland really does need to start worrying.