Moscow deploys some 100,000 troops along the Ukrainian border. 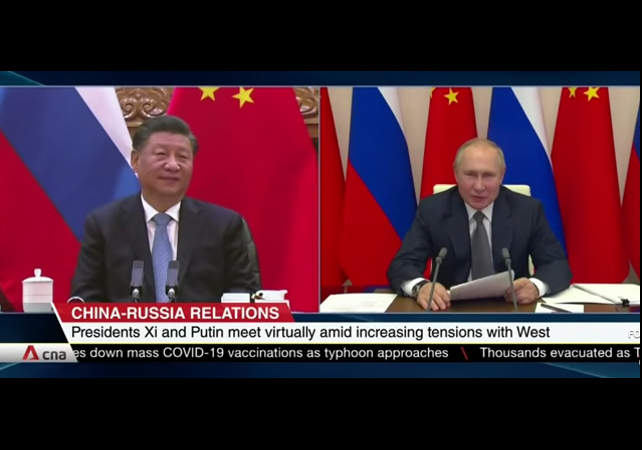 Chinese leader Xi Jinping has pledged his support for Russian President Vladimir Putin as Moscow amasses troops along its border with Ukraine.

Beijing backed Moscow’s demand for rolling back the NATO in eastern Europe while the Russian military continues to threaten neighboring Ukrainian and Russia-backed militia operate in the country. “Russia and China should stand firm in rejecting Western interference and defending each other’s security interests, presidents Vladimir Putin and Xi Jinping agreed in a video call on Wednesday,” the Reuters noted.

The South China Morning Post reported the details of the bilateral conference call:

In a video call with his Russian counterpart Vladimir Putin on Wednesday, Xi also said China and Russia opposed attempts to divide the two nations and called for more joint actions to safeguard their security interests.

“China and Russia are both major nations with global influence,” Xi said, according to state news agency Xinhua. “China will, as always, firmly support Russia’s efforts to maintain the country’s long-term stability”.

The Chinese support comes as U.S. intelligence fears an imminent Russian invasion of Ukraine. “The new intelligence finding estimates that the Russians are planning to deploy an estimated 175,000 troops and almost half of them are already deployed along various points near Ukraine’s border,” the Associated Press reported on December 4.

Much like Russia, China is also engaged in aggressive military maneuvers against Taiwan, an Island nation that Beijing wants to bring under its control. On Wednesday, China’s People Liberation Army (PLA) conducted live-fire drills in South China Sea. In October, The PLA carried massive incursion of Taiwan’s air defense zone, flying in around 150 fighters jets, warplanes and nuclear-capable bombers.

Last month, China and Russia signed a series of agreements paving the wave for a military alliance. Chinese and Russian defense chiefs  “signed a road map for closer military cooperation over the next five years,” the South China Morning Post reported on November 24.

The emerging Sino-Russian axis poses a huge military challenge to the United States. The joint Chinese and Russian military budget, pegged at $604 and $200 billion respectively, exceeds that of the U.S. which is estimated be around $715 billion.

It is becoming obvious every day that Russia and China’s military alliance is meant to support each other’s territorial ambitions. Very likely to be a HOT spring 2022.

Russia will likely cause a coup in Ukraine and have the coup leaders “invite” the Russian military in to help. The Russians love to have a pretext for military action and to get “invited” to intervene (Syria, for example).

China will blockade Taiwan. They have already tried to isolate Taiwan in the world community. If there is a blockade, Taiwan will fold within 6 months. They have few natural resources and have to import all their fuel. ONLY the USA has the power to lift enough tonnage to break a blockade.

>> Biden cutting off the Taiwanese Minister during the so-called “democracy” summit – certainly would worry the Taiwanese.

USA will protects – but its unlikely that Biden will Act. MORE Likely, Biden will MAKE A DEAL –
1. China can have Taiwan if China ENDS SUPPORT FOR NORTH KOREA.
2. Russia can have Ukraine if US / NATO can [ fill-in the blank ]

The most scary prospect — China and Russia do what they want and US / NATO get nothing.

CORRECTION — should be “USA will protest” >> not “protects”

Another example of Russian’s getting “invited” to interviene – Czechoslovakia in 1968.

Another example of Russian pretext for invasion – getting “invited” to intervene – Afghanistan in 1979.

Biden will do nothin. China and Russia are reaping the benefits of the millions of dollars in bribes that they paid him. The progressive fascists will be happy to see the racist USA humiliated and weakened. The likely result will be WW3.

Hopefully Taiwan has nuclear weapons that they can use to destroy China if things get to where they are close to surrender. They have the money to buy nuclear weapons from Israel and it would be money put to good use.

But at least we don’t have an Orange Man making mean tweets on Twitter™ any longer, right? Right?!??

Neville Chamberlain was a lion, compared to the impotent sap currently in the Oval Office.

If this is the deal – the USA will be making a dumb trade.

1. Taiwan is worth 1,000 North Koreas.
2. Taiwanese cultural is worth defending – they are capitalists and believe in democracy
3. North Korea will implode on it own.

The Sino-Russian alliance is a massive failure of neo-cons policy and of intel. services that have taken to shaping their reports to fit the politics de jure – rather than being non-partisan objective analysts.

Pieces on the global chess board are about to change dramatically in a way that is adverse to US interests.

It’s a direct result of the progressive taking power in the USA.

It is time to get serious about this. We need to send our Vice President Kamala Harris over there to show them what they are facing if they mess with us.

Send the 4-star Admiral who wears dresses. S/He will have them quaking in their boots — or maybe laughing their socks off.

How catastrophic it would be if both China attacks and conquers Taiwan and Russia does the same with Ukraine? I never thought I would see the day when near peer powers would threaten anyone with a strong US in the world. It saddens me to think that we as a world power has diminished so badly that we could literally just stand by and do nothing.

The two biggest troublemakers in the class are forming alliances and there’s a teacher in charge who doesn’t believe in consequences or discipline….just sunshine, rainbows, and positive reinforcement.

If this situation isn’t a macrocosm of our societal rot thanks to progressive bullshit, I don’t know what is.