The New York Times, Newsweek, and CNN were among numerous media outlets who initially reported with some variations that the Fox News Christmas tree simply “caught on fire.” 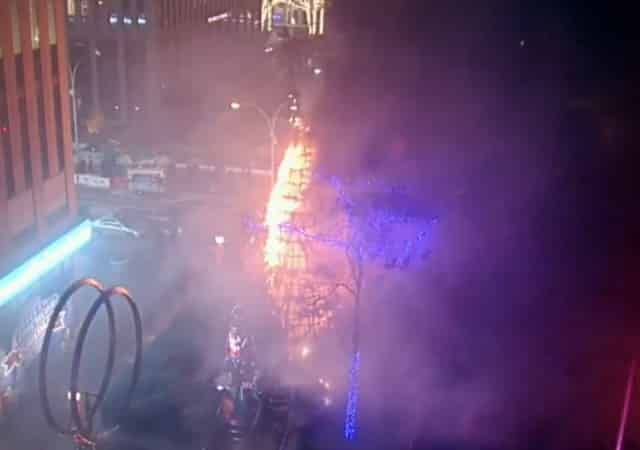 ‘Tis the season to be jolly and all that, but one man in New York City wasn’t feeling any Christmas cheer whenever he looked at the Fox News patriotic-themed Christmas tree. So he allegedly set it on fire.

The popular cable news network filed this report on what happened:

The massive All-American Christmas Tree outside Fox News’ New York City headquarters was seriously damaged in a fire early Wednesday and police say they arrested the man accused of sparking the flames.

Fox News security spotted the suspect, later identified as Craig Tamanaha, climbing the 50-foot-tall tree at the center of Fox Square just after midnight. The Sixth Avenue and 48th Street location is in the heart of Midtown.

NYPD officers arrived at the scene and saw the suspect running from the location. They took him into custody before filing charges that included criminal mischief, reckless endangerment and arson. City firefighters managed to extinguish the blaze.

About four seconds into the clip below, you see videos from different angles of the tree in various stages of being destroyed from the fire, and then you see what it looked like in the aftermath:

Just as they did after the Waukesha car plowing massacre, the mainstream media went into “inanimate object did something” mode in response to the news. While the below NY Times tweet notes that a suspect is in custody, their original headline simply said the tree “catches fire”:

A 50-foot-tall Christmas tree outside the Fox News headquarters in New York City went up in flames. One man has been arrested, the police said. https://t.co/dYeIAvMA5A

Same thing with CNN, whose original headline was that the tree was “engulfed in flames”

New York City police have taken a man into custody after he allegedly set a Christmas tree on fire outside of the Fox News Studios in Manhattan. https://t.co/ubOpC0IIY6

Newsweek’s headline was perhaps the most bizarre, focusing on the reaction of Fox News media figures to the tree “catching fire”

How Fox News reacted to their own Christmas tree catching fire https://t.co/o1oI7jU2RJ

Some Democrats took similar approaches to the media in their tweets on the story:

The Christmas tree outside of Fox News has caught on fire. pic.twitter.com/No7SVK0JeF

Others took the opportunity to remind us of who they really are:

Joking about arson. Calling those you disagree with racists. Name calling.

Not much is known about the suspect at this time, though some media outlets have reported that he’s a homeless man. Motivations aren’t known, either, though the conclusion that would be immediately jumped to by other media outlets would be along the lines of “this is an attack on the media!!” had it been any other news outlet than Fox News.

The good news is that the tree will be rebuilt:

FOX News Media CEO Suzanne Scott informed staffers Wednesday that FOX News Media’s All-American Christmas tree would be rebuilt as “a message that there can be peace, light and joy even during a dark moment” after it was set on fire outside Fox News’ New York City headquarters.

“This has become a new wonderful tradition on FOX Square over the last three years. We will not let this deliberate and brazen act of cowardice deter us. We are in the process of rebuilding and installing a new tree as a message that there can be peace, light and joy even during a dark moment like this,” Scott wrote. “We are currently planning on a lighting ceremony for the new tree and will send those details once we have them.”

I suspect that the new tree will look even better, will shine brighter, and might even be bigger than the first one. Stay tuned.

I hope they get another and done up better than before.

We should just ignore this, and
just celebrate the birth of the Prince of Mostly Peace.

Except on the sun.

There is no fire on the sun. Just Nuclear Fusion.

I’m sorry, but this statement in the literal context of Christmas trees is truly risible.

I could not contain myself. I grabbed my mares leg and went out and shot two clowns.

Booth? Is that you?

I put on FAF this morning to see this story… Pete,Ainsley and Brian seemed really pissed, They said that someone had climbed up into it and set it on fire. New York City sucks.. I used to work and live there. Very sad story, sadder still by the way the other networks reported it.

The tree’s motive for it’s self-immolation is not currently known.

It was given Ritalin when it was a seedling.

Was the tree from Arkansas?

Yes. Hillary Clinton and Jame McDougal planted several questionable seedlings in the Ozark land deal. Hillary made out like a bandit but McDougal and the trees got burned.

Some tree did something.

And the Culprit is let out of jail already. Another reason to avoid NYC like the slum it has become.

Too bad the idiot didn’t remain in the tree.

I’m still befuddled by reports all agreeing that the guy climbed the tree before setting it on fire. The fellow does not appear to be in the least Palestinian.

If he was Palestinian he would’ve tunneled under the tree.

Click on the tweets of “Kate” and Mr. Obladeoblada. Cheering the burning of a friggin’ Christmas tree is some bona fide sick shit. These people are ill.

It will be very hard to prove but i am certain some soros funded group paid him to set it on fire.