Defense claimed a third person participated in the alleged attack. 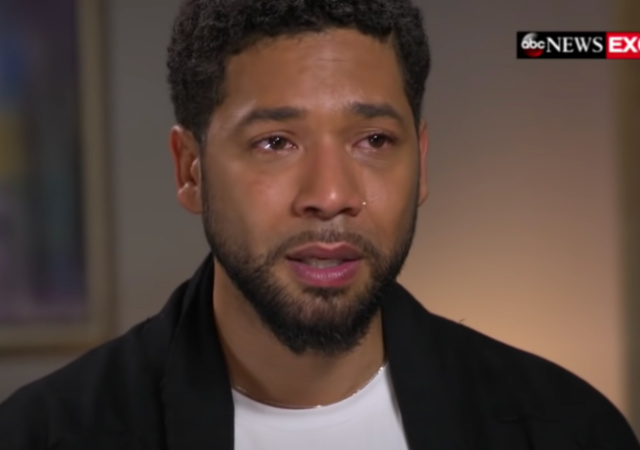 The jury for the former Empire actor Jussie Smollett trial viewed a damning piece of evidence on Tuesday: Smollett and the brothers Abimbola and Olabinjo Osundairo did a “dry run” of the alleged hate crime in Chicago on a cold January night.

The three of them supposedly did the dry run a day before Smollett claimed two white males attacked him, threw a rope around his neck as they yelled racial and homophobic slurs, and yelled, “This is MAGA country!”

Smollett’s unraveled from the beginning. Chicago Police Det. Michael Theis, the first prosecution witness, recalled how the department dedicated two dozen detectives to the case. They logged in 3,000 hours to investigate the crime.

Theis said the brothers accused Smollett of wanting to stage the attack “because he was unhappy about how the TV studio handled hate mail” he received:

He said investigators checked out the brothers’ account — including that the actor picked them up days before the attack and drove them around the downtown neighborhood where he lived and talked about what would happen — and corroborated their version of events using GPS, cellphone records and video evidence. Police found no instance where they concluded the men were lying, he added.

“At the end of the investigation, we determined that the alleged hate crime was actually a staged event,” Theis said, and the Osundairo brothers were released.

The jury saw videos of the brothers buying supplies and a still photograph of Smollett with the clothesline around his neck as returned home.

Then the prosecution unveiled a piece of evidence never revealed to the public. On February 14, 2019, Smollett allegedly sent a text to Abimbola after the police questioned him:

“Brother….I love you,” read Smollett’s text to Abimbola Osundairo on the afternoon of Feb. 14, 2019. “I stand with you. I know 1000% you and your brother did nothing wrong and never would. I am making this statement so everyone else knows. They will not get away with this. Please hit me when they let you go. I am behind you fully.”

The text, which had never before been made public, was shown to jurors Tuesday on the second day of Smollett’s trial on charges that he hired Osundairo and his younger brother, Olabinjo, to commit a phony racist and homophobic attack on Smollett in January 2019.

Testifying as the first witness for prosecutors, Chicago police Detective Michael Theis, one of the lead investigators on the Smollett case, noted the unusual nature of Smollett’s insistence that he was “making a statement” about the brothers’ innocence, which he had never done before publicly, either before or since.

“To this day, has Mr. Smollett ever come clean about this hate crime?” deputy special prosecutor Samuel Mendenhall asked Theis.

“Not that I’m aware of,” Theis replied.

The timing of the text was crucial, as it could easily be construed as an attempt by Smollett to get the brothers to keep quiet.

Good Morning America aired its interview with Smollett that morning where he detailed the alleged hate crime attack. Tears and all.

Despite the text message, defense attorney Nenye Yche claimed the brothers are liars and homophobic. He also said a third attacker might be involved:

Uche also suggested that a third attacker was involved. One area resident said she saw a white man with “reddish brown hair” who appeared to be waiting for someone that night, according to police reports. She told a detective that when the man turned away from her, she “could see hanging out from underneath his jacket what appeared to be a rope.”

Uche referenced the woman during his cross-examination of Theis on Tuesday, and Theis acknowledged that he saw that statement but did not send a detective to re-interview her. He said the woman had seen the man a few hours before the alleged attack and that “the rope was a different color.”

Smollett Is a black, gay Hollywood actor who made accusations against all Trump supporters of being complicit in a racist hate crime. That checks a lot of boxes.

Because of this it will be tough to convict Smollett.

I think he’s going down. I live a few blocks away from where the incident didn’t happen and he was a laughing stock out here. Even the lefties I know did not buy that we have pickup trucks full of rednecks pulling Jim Crow era BS (let alone doing so on a bitter cold night that even the locals stayed home for). Chicago is a liberal city but it isn’t San Francisco.

Even if the jury follows the evidence and convicts, I doubt he’ll ever do time.

He had Senators Que’ Mala Harris and Brokeback Booker on his side. They were ‘coincidentally’ pushing a bill to make lynching a federal hate crime around the time this lynching hoax took place, despite the fact that lynching someone is already a crime. A lot of people still wonder if maybe there wasn’t some connection, especially after the State’s Attorney, Kimberly Foxx, initially refused to bring charges and Harris’ supported Foxx’s re-election.

That is my attempt at French. I went to junior high school and high school with a native Parisian. His description of his own language was as follows: “So many letters, so few pronounced”.

What defeats me with French the most is a word will end with the letter R. But it either has an A sound as in yay, or it has an R sound as in, well, R.

You may now take off your Smokey the Bear Hat and take a deep bow.

For Chapelle Juicy will be the gift that keeps on giving. By keeping it alive the credibility of those trying to make it go away just erodes a bit more day by day. Even the stupid people are starting to notice a pattern here.

I believe the French spelling is Smoliet.

Rhymes with Joliet. Hope he goes there.

Who are we kidding? This guy will walk. No Democrat laden jury will ever convict this guy of anything.

In this case, the process being the punishment is a good thing. To me, it is a freakin’ miracle that this story is still in the headlines. That right there gives me hope. So many folks wish this would go away, and a few have tried to put it away. But here it is.

Hopefully, Jussie will forever be the poster boy for fake hate crimes, and all future hate-fakers will be judged by the “Smollett” metric.

If he gets off, it will simply be winning a battle that causes them to lose the war. To the left, this is a situation that they need to win to maintain the narrative, right up there with Oberlin and Kyle. The tide is turning and they know as evidenced by their increasing desperation to force the narrative despite the majority now seeing through it.

I spoke with some black people who think if he gets off it will cause more damage than if he is convicted. I am not sure that many support this idiot.

Police logged 3000 hours investigating this……a story that was stupid from the very beginning. But hundreds of murders and THOUSANDS of shootings in Chiraq go unsolved every year. Nobody who has the power to do anything about it cares at all.

Shootings in Chicago are probably 90% gang-related and the Chicago Aldermen are owned by the gangs, going back decades. The gangs make sure the wards vote “correctly” and the Aldermen make sure the DA keeps the heat off of any who are unfortunate enough to get arrested. Do some research on the number of Chicago arrests who are allowed to plead off multiple gun related charges before they are finally arrested for murder.

In Chicago, murder in the hood is treated as “misdemeanor murder.”

This is Chicago. The prosecutors will go relatively easy on Smollet, as will judge and jury. I expect him to be found guilty, but the sentence to be light in spite of him faking a hate crime for attention and a bigger salary increase from the Empire show.

Juicy faked this in order to help Kamala, who had an anti lynching campaign going on at the time
https://www.americanthinker.com/blog/2019/02/was_kamala_harris_part_of_the_jussie_smollett_hoax.html

Jussie’s only hope now is for Kamala to do the right thing.

You mean pull a smullet?

What could she do even if she wanted to?

As the Left is apt to do — this is ripe for Fed wire/mail fraud charges, right? What are the chances of this administration pushing that? Yeah right…