Tehran Times: “Zionist regime has forgotten that Iran is more than capable of hitting them from anywhere.” 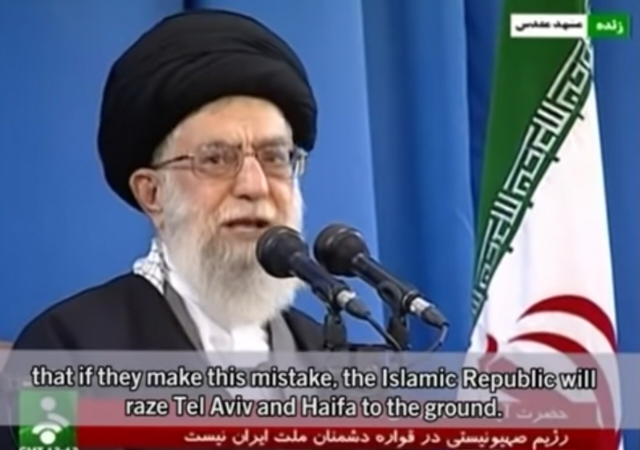 The Iranian state-linked newspaper Tehran Times has revealed a list of targets in Israel that the Mullah regime intends to strike in case of a military conflict. On Wednesday, the leading Iranian English language daily published a map of Israel dotted with markers showing potential missile targets.

The Islamic regime in Iran threatens to bomb Israel on the front page of 'Tehran Times'.

Their greatest ambition is to level Israel to the ground – killing our Jewish, Muslim and Christian civilians. pic.twitter.com/4k7eRME75p

The list of targets highlights the Islamic Republic’s ability to strike towns and cities throughout Israel. Iran has long-range ballistic missiles capable of carrying nuclear warheads. The Shia-Islamic regime is also reported to have a chemical and biological weapons program.

In case of an Iranian offensive, Israel will not only be threatened from incoming missiles from Iran. The Iranian regime has created forward bases in territories controlled by its proxy Islamic militias and terrorist groups. Iran has supplied huge stockpiles of rockets, long-range and precision-guided missiles, to Lebanese terror-militia Hezbollah, Gaza-based jihadi group Hamas and several terrorist groups in Iraq.

The population centers in the Iranian cross hairs include Arab cities administered by the Palestinian Authority.

The Times of Israel reported the latest Iranian threat:

Iran’s state-affiliated Tehran Times issued a threat to Israel on Wednesday, publishing a map of the country riddled with markers as a reminder that Iranian forces can ostensibly strike anywhere they want.

Alongside a front-page opinion piece headlined “Just one wrong move!” the map showed scores of markers along the length and breadth of the country.

Though the paper didn’t specify what the markers represented, the article opened by declaring, “An intensification of the Israeli military threats against Iran seems to suggest that the Zionist regime has forgotten that Iran is more than capable of hitting them from anywhere.” (…)

The piece quoted Major General Mohammad Bagheri, chief of general staff of the Iranian Armed Forces, as saying Tuesday that “at the strategic level we do not intend to strike anyone, but at the operational and tactical level we are ready for a decisive response and a quick and tough offensive against the enemy.”

“The Tehran Times doesn’t need to remind the illegitimate regime of Israel of Iran’s defense capabilities,” the article said. “Yet they need to remember something.”

The paper then recalled Supreme Leader Ayatollah Ali Khamenei’s remarks in 2013 that “they are threatening to strike militarily, but I think they know it, and if they do not know it, they must know that if they make a mistake the Islamic Republic will destroy Tel Aviv and Haifa.”

Israel is the only country in the Middle East that has the military capability and the political will to stop Iran from going nuclear. By threatening the Jewish State, Iran hopes to avert an Israeli strike on its nuclear weapons facilities as it races towards the bomb.

The latest Iranian threat comes as the Biden White House is holding talks to restore the 2015 nuclear deal. Some news reports indicate that the Biden administration may be close to making economic concessions and lifting sanctions on Iran, Israeli media reports say, citing the top Iranian negotiator.

“The United States is close to reaching a deal with Iran on the removal of sanctions imposed on the Islamic Republic, [the Israeli TV channel] N12 reported on Saturday citing Iranian deputy foreign minister Ali Bagheri Kani,” The Jerusalem Post wrote.

While the Biden White House is engaged in European Union-backed negotiations in Austria, Tehran is ramping up its nuclear weapons program. The United Nation’s watch dog, International Atomic Energy Agency (IAEA), warned recently that Iran is just a step away from producing weapons-grade uranium, the key ingredient needed for a nuclear bomb. “The agency said Iran plans to enrich uranium there up to 20% purity — a short, technical step from weapons-grade levels of 90%.” The Associated Press reported earlier this month.

Will Biden step in to help Israel if/when Iran attacks? Israel needs that assurance, and Iran needs to hear than in very clear terms. But it looks like they are not going to get it.

Biden seems to be saying “We want the nuclear deal even if it doesn’t mean anything. We’ll ignore your threats to Israel if you’ll give us our political goal.”

Do you really have any confidence in Biden or his puppet string masters? He abandoned US citizens and allies in Afghanistan. Biden has always played “The Price is Right”.

Everything Iran threatens Israel with should be delivered upon them, sooner rather than later.

Israel is on its own.

Iran is now allied with Russia and China.

Odd thing, though: Putin’s making a mistake blindly sidling up with a genodical empire like China. If Putin really cared about Russians, he’d sidle up with Israel and its brain trust.

I suppose his sidling choices say all there is to be said about Putin.

But at least we don’t have an Orange Man making mean tweets on Twitter®, right? Right?!??

While they scream they are the real victims in all this.

They should join BLM.

there is a word for people that sell-out their allies

What word is that?

Fine – as you point out – there are many words for “sellout”

Meanwhile, Iran, Russia and China are all loading up on used American Military Equipment left in Afghanistan. The Taliban has created the worlds largest Army surplus store they call “Traitor Joe’s”.

Well at least they are giving advanced warning!
Maybe Milley demanded it in a phone call

Quick, reorder the claims, and redistribute the change. Oh, we unconditionally surrender, with housewarming gifts in the spirit of the holidays. Ha! Ha! Ha!

TO HIS DEFENSE – BIDEN IS A BIT BUSY RIGHT NOW

He has his hands filled with destroying America. Inflation doesn’t rise by itself you know. Not to 40 year highs within 9 months of taking office. Strategic military debacles like Afghanistan require at least a few power naps and the chutzpah to call them “extraordinary success” takes some planning. So, you see, he has been busy.

So, he just does not have time for all the problems in the rest of the world. Russia, Iran, China, North Korea. They do not compare to the 100 million white supremacists Biden believes are running all around the USA. Do you know that man of them are not even using proper pronouns – talk about insult added to injury !

I mean, we have a Congressional Commission on the Jan-6 insurrection for a reason — we have to find out who these White people are! ! If possible they will have the FBI drag every white American in under oath and ask “What did you know – you deplorable piece of white crap – and when did you know it ?” Maybe the FBI can get some Asians and Blacks in too – if they support Trump they must be White Supremacists.

Oh, and don’t forget, Biden has to Pardon Jesse Smollett and Hunter Biden because courts are racist, or something.

Biden is busy scheduling all those flights and buses to transport (for free) all the illegal immigrants throughout the USA – especially to red states (which they hope to turn blue). It is a daunting logistical task. Much more complex than the logistical problems at the ports. Actually, the transport and distribution of 2+ million illegals all around the USA is a much higher priority to Biden than any other issue.

Yep, Biden is busy busy. Don’t forget he has to keep the Teachers Unions happy and get the DOJ and FBI after the uppity parents who dare to oppose government indoctrination of their kids with race and gender and other divisive woke agendas.

Between naps and “calling a lid” on his daily schedule (which does not start till 10:30am) – Biden ONLY has about 10 good hours per week. Then he has to fly out to Delaware to spend time with Jill and their pets. I mean, what do you expect ? Is he supposed to work up a sweat ? Com’on Man.

Somewhat hyperbolic headline. This isn’t a “list of Iran’s missile targets”, it’s a list of locations in Israel and Palestine.

That Iran could attack any of them is true, and that the Iranian article is in context threatening justifies this article, but there’s no need to overstate or misrepresent it.