“While criticism of Israel is not necessarily antisemitic, the inordinate amount of attention given to Israel and the excessive criticism directed at that one country is evidence of a double-standard with respect to the Jewish state, which is a central feature of a widely accepted definition of antisemitism.” 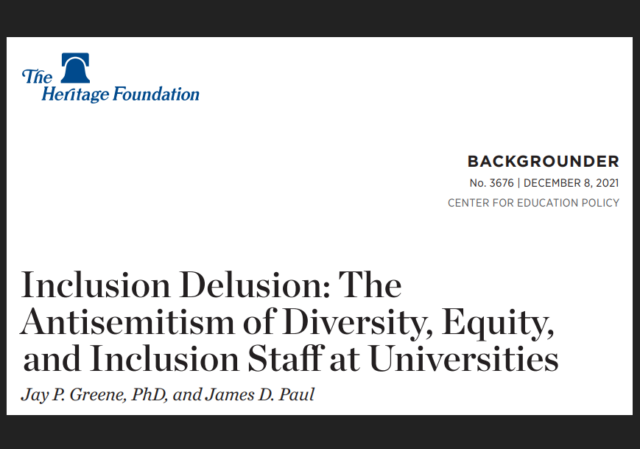 The Heritage Foundation has issued an exposé of university diversity, equity, and inclusion staffers’ anti-Semitism. Not only do DEI staffers fail to address Jewish concerns; Heritage found that they often actively foster a hostile climate of anti-Semitism.

To measure anti-Semitism among university DEI staffers, Heritage searched the Twitter feeds of 741 DEI personnel at 65 universities to find their public communications regarding Israel. Heritage noted:

While criticism of Israel is not necessarily antisemitic, the inordinate amount of attention given to Israel and the excessive criticism directed at that one country is evidence of a double-standard with respect to the Jewish state, which is a central feature of a widely accepted definition of antisemitism.

Of the 633 tweets about Israel – the only democracy in the Middle East, a place where all citizens regardless of religion, ethnicity, gender, or sexual preference share citizenship rights including the right to vote and to express themselves – 605 (96%) were critical of the Jewish state. Most of these were highly critical, accusing Israel of practicing genocide, apartheid, and ethnic cleansing. Examples include:

• “the State of Israel is guilty of the human rights crimes of apartheid and persecution. Settler colonialism is fundamentally violent. And it begets violence.”

• “Re Palestine, you gotta understand: there’s no ‘controversy.’ Most people around the world know that Israel brutally colonizes the Palestinians. The issue is only ‘controversial’ because Zionists pitch a fit whenever anybody speaks this truth.”

• “israel has a particular loathing for children. they target them with violence specifically and intentionally every single day.”

• “#Gaza is under attack. This is genocide. #FreeGaza.”

As a comparison, Heritage also reviewed Twitter feeds for attitudes toward China. DEI staffers devoted roughly a third as many tweets to China as they did to Israel, a much smaller country in size, population, and economy. Of the 216 tweets about China reviewed for comparative purposes, only 83 (38%) were critical and 133 (62%) were favorable.

This is despite China’s nature as a totalitarian society where more than a million Uyghur Muslims have been incarcerated in concentration camps; the nation of Tibet has been forcibly incorporated into China; both regions are being Sinicized; members of religious minorities like Falun Gong are incarcerated and used for organ-harvesting; Hong Kong has been forcibly incorporated into China, free speech has been suppressed there, and democracy activists sentenced to prison; Taiwan is threatened with invasion; and Chinese citizens constantly monitored by facial recognition software and other technology and their internet access restricted.

Even the 38% minority of negative tweets about China were mild compared to criticism of Israel. “The extreme language used in tweets regarding Israel almost never appeared in tweets regarding China. There are no occurrences of the words apartheid and ethnic clean[s]ing, nor is China ever accused of targeting children in these tweets, retweets, and likes.” 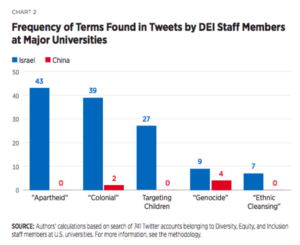 DEI staffers’ tweets not only revealed deep antipathy to the State of Israel; they also contained a strong undercurrent of hostility toward Jews:

While American Jewry is rarely mentioned specifically in these public communications from DEI staff, their alleged role in facilitating Israeli crimes is often in the subtext. An Outreach and Engagement librarian retweeted, “Tell U.S. Jewish leaders: Stop defending #Gaza assault.” One multicultural consultant liked the message, “Jewish people are not responsible for the actions of the Israeli government, but we are responsible for calling out violence and human rights abuses when we see them, especially when the people committing the violence claim to be doing so in our name.” A DEI staffer at a Big Ten school was clearly describing the supposedly insidious influence of American Jews when he liked this message: “There’s a vast philanthropic-lobbying complex in the US that works tirelessly to present Israelis as benevolent, peace-loving, and fundamentally reasonable victims of Palestinian aggression, and meanwhile in actual Israel no one bothers with the pretense.”

The report summarizes IHRA’s definition of anti-Semitism and concludes the tweets are not just anti-Israel, but anti-Semitic:

[C]riticism of Israel constitutes antisemitism when it exhibits certain characteristics…

• “Denying the Jewish people their right to self-determination, e.g. by claiming that the existence of a State of Israel is a racist endeavor”

• “Holding Jews collectively responsible for actions of the state of Israel.”

The tweets retweets and likes of DEI staff documented here provide instances of all of these antisemitic qualities.

Furthermore, Heritage notes, Israel plays a strong role in the identity of most American Jews. Even if the obsessive attacks on it were not formally anti-Semitic, they fostered an environment alienating to Jews.

Even if the hyperbolic and obsessive criticism of Israel expressed by university DEI staff did not meet the definition of antisemitism (which it clearly does), attacking a central feature of Jewish students’ identity would be entirely contrary to the stated purpose of having DEI staff: to welcome students from all backgrounds, make them feel included, and prevent or address incidents of hate and bias.

Keep in mind that universities now have an average of 45 staffers, allegedly working to promote a tolerant environment on college campuses. The report observes, “university DEI staff are better understood as political activists with a narrow and often radical political agenda rather than promoters of welcoming and inclusive environments.”

Recent news abounds in specific examples of the problem. Last May, two Jewish employees of Stanford University’s Counseling & Psychological Services (CAPS) division filed federal and state complaints alleging a hostile environment for Jewish employees in an internal DEI program. According to the complaint, the school’s DEI committee “knowingly failed to respond to anti-Semitic incidents that occurred on the Stanford campus,” and outright endorsed the narrative that Jews are connected to white supremacy, advancing anti-Semitic tropes concerning Jewish power, conspiracy and control.

Anti-Semitism among DEI activists is not limited to paid staffers, as shown by University of Southern California DEI graduate student senator Yasmeen Mashayekh. She has openly expressed her anti-Semitism with comments like “Curse the Jews” [“yel3an el yahood”] and “Zionism is Nazism.” A supporter of the Hamas terror organization, Mashayekh has also expressed the desire to “kill every motherf-king zionist,” and called for the complete destruction of Israel.

As the Heritage report also noted, the problem goes beyond the university campus. For example, Google’s head of diversity, Kamau Bobb, wrote that Jews have an “insatiable appetite for war” and an “insensitivity to the suffering [of] others.”

“I would be afraid of my increasing insensitivity to the suffering [of] others."

🤯 How is the obscene, antisemitic bigot still employed there? pic.twitter.com/IzXQkAzmv9

Heritage offers this context for its report:

There has been a sharp increase recently in antisemitic incidents worldwide, in the United States, and particularly on college campuses. According to Hillel International, the main university organization for Jewish students, there were 244 antisemitic incidents reported during the mostly virtual 2020–2021 school year compared to 181 during the prior year when everyone was on campus for in-person instruction.

DEI staff are supposed to be working to prevent such incidents rather than foment them. According to the National Association of Diversity Officers in Higher Education Standards of Professional Practice, “Chief diversity officers work with senior administrators and campus professionals to develop, facilitate, respond to, and assess campus protocols that address hate-bias incidents, including efforts related to prevention, education, and intervention.” DEI staff are supposed to prevent hate/bias incidents directed at any student group: “Chief diversity officers have ethical, legal, and practical obligations to frame their work from comprehensive definitions of equity, diversity, and inclusion—definitions that are inclusive with respect to a wide range of identities.”

But the activities of many DEI staff lend credence to the title of David Baddiel’s recent book that “Jews don’t count.”

Truly achieving diversity, especially ideological diversity, and helping all students feel included requires a dramatic change in how universities approach DEI. Existing staff need to be dramatically reduced, and the remaining DEI infrastructure needs to be reoriented toward serving the true purposes of diversity and inclusion.

Johanna Markind is Research Editor and Counsel at the Legal Insurrection Foundation, which she recently joined.

It isn’t this bad among professors teaching things that are actually useful. I heard the term “Israel” in geneds I had to take only.

Antisemitism is a crucial part of being “woke.”
And DEI staff are the wokest of the woke.

So logically, we expect DEI staff to be antisemitic.
I’ve found that they usually disguise their antisemitism using PC euphemisms.

The left is doing all the Nazi things, including hating the Nazi’s victims.
Yet, the right “are the Nazis.”

WOKE ARE AGAINST PEOPLE WHO PRACTICE THEIR RELIGION

They are against Christians and Jews who practice religion. Communists have historically been opposed to religion (see USSR and China).

For Jews, the anti-religion is combined with the “oppressor – oppressed” narrative that acts as a wedge issue to gain legitimacy in people’s minds. Once that idea is planted — they can fill the head with more infectious ideas.

You didn’t pay attention to the scum that infest our colleges.

It’s anti-IQ. Ashkenazi Jews have an average IQ of 110, their neighbors are in the 80s. So there’s diversity resentment, just as there is for whites and Asians in the US.

It winds up anti-Semitism because Jews have an exceptionally high verbal IQ and a strong tendency to whine.

While criticism of Israel is not necessarily antisemitic

Not “necessarily”, but in practice it always is.

I’m not talking about criticizing Israel for some specific policy that one disagrees with; I have many many criticisms of Israeli policy, starting with the vestiges of socialism that still linger, the lack of freedom of speech and other US-style civil liberties, the dictatorship by the self-appointed judiciary and the legal establishment, conscription, and the way the government is handing Wuhan Disease.

I’m talking about criticism of zionism., i.e. of Israel’s right to exist, or of its right to defend that existence. It is theoretically possible to be anti-zionist without being antisemitic, but none of the people we’re discussing ever are.

The woke agenda is replete with anti Semitic overtones and propaganda