China Bans the BBC in Its Territory After Report of Rape, Abuse in Uighur Concentration Camps

China Bans the BBC in Its Territory After Report of Rape, Abuse in Uighur Concentration Camps

BBC interviewed the Uighur woman in the featured image. She spent eight months in a camp where she claims men raped, abused, and tortured women. 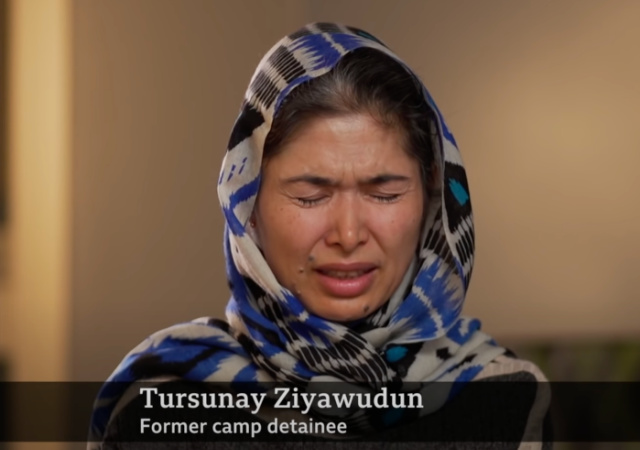 China banned the British Broadcasting Corp. (BBC) in its territory.

The move comes after the BBC published a report with allegations of rape, torture, and abuse in Uighur concentration camps in Xinjiang province.

However, China already restricts BBC viewership in the country. It only appears “in international hotels and some diplomatic compounds.”

Therefore, the majority of Chinese people do not have access to the BBC.

In its decision, China’s State Film, TV and Radio Administration said BBC World News reports about China were found to “seriously violate” broadcast guidelines, including “the requirement that news should be truthful and fair” and not “harm China’s national interests”.

It said that the BBC’s application to air for another year would not be accepted.

The BBC said in a statement: ‘We are disappointed that the Chinese authorities have decided to take this course of action. The BBC is the world’s most trusted international news broadcaster and reports on stories from around the world fairly, impartially and without fear or favour.”

Ofcom’s decision earlier this month came after it found that CGTN’s licence was wrongfully held by Star China Media Ltd.

Tursunay Ziawudun, who spent nine months in a concentration camp in the Xinjiang region, said “men always wore masks” and suits. They’d select women after midnight to join them in the “black room,” which did not have surveillance cameras.

The men took Ziawudun and gang-raped her three times.

“Perhaps this is the most unforgettable scar on me forever,” she told the BBC. “I don’t even want these words to spill from my mouth.”

The Chinese detained Gulzira Auelkhan, a Kazakh woman, for 18 months within the system. She described how they forced her “to strip Uighur women naked and handcuff them.” She would then leave them in the room for Chinese men:

Afterwards, she cleaned the rooms, she said.

“My job was to remove their clothes above the waist and handcuff them so they cannot move,” said Gulzira Auelkhan, crossing her wrists behind her head to demonstrate. “Then I would leave the women in the room and a man would enter – some Chinese man from outside or policeman. I sat silently next to the door, and when the man left the room I took the woman for a shower.”

The Chinese men “would pay money to have their pick of the prettiest young inmates”, she said.

Some former detainees of the camps have described being forced to assist guards or face punishment. Auelkhan said she was powerless to resist or intervene.

Asked if there was a system of organised rape, she said: “Yes, rape.”

So many similarities between MSM / big media and the CCP.
You could think they are one and the same.

And Biden will take a firm stance on this and call out China for their criminal actions and horrible human rights record, right? Right??

He will write a sternly worded letter.

These banning’s will help create strong, vibrant competition. People, companies should wise up, walk away.

These banning’s will help create strong, vibrant competition. People, companies should wise up, walk away

Chairman Xi can replace it with NBA TV. Adam Silver and LeFlop will do whatever Xi tells them to do.

Imagine life as a treasonous puppet?

The leaders of the EU and Britain and its commonwealth know all about China’s human rights abuses.

Outgoing president of the EU Angela Merkel just signed a massive trade pact with the CCP. Merkel and Pelosi and Romney would step over the corpses of hundreds of rape victims to make a deal with their corrupted and amoral Chinese counterparts.

Sure makes me want to run right out and buy a Buick Envision, an Apple product, or a small appliance.

Hollywood and the likes of le bron james must be very proud.

Is metoo a community of crickets?

Neville Chamberlain would feel right at home with those appeasers, although at least he didn’t accept payoff bribe money from them.

Neville Chamberlain was an appeaser, not a traitor.

This article on NPR shows that China has been restraining
western news media for several years:
https://www.npr.org/2020/04/14/828565428/bloomberg-news-killed-investigation-fired-reporter-then-sought-to-silence-his-wi

The Chinese also have significant financial influence over the NBA, and they’re willing to flex that influence to control what they say:
https://www.wsj.com/articles/china-standoff-cost-the-nba-hundreds-of-millions-11581866522

Frankly, I don’t think that any Democrat source, including ABC, NBC, CBS, CNN, or Biden, will ever say anything that really shows what’s going on in Xinjiang. All of these people are uncritical of the Chinese, and I think that reflects their fear of Chinese retaliation for any negative coverage.

Uighur is a form of Muslim.
They ain’t angels, you know.
Best to stay the hell out of this one.

They ain’t angels, you know.

Yes, it’s amazing how this gets tons of press, but the ongoing slaughter in Africa by Islamic would-be conquerors, how Copts are treated in Egypt, and the still active Muslim slave markets, gets almost no press at all.

Just like the USA. What a coincidence. Same Owner’s Manual. Leftists.

“In its decision, China’s State Film, TV and Radio Administration said BBC World News reports about China were found to “seriously violate” broadcast guidelines, including “the requirement that news should be truthful and fair” and not “harm China’s national interests”.”