“So oppose the vehement fascist, but oppose the polite Zionist too. They are not your friends. They will not be there for you when you need them. They will take your friendship and throw your Palestinian brothers and sisters under the bus.” 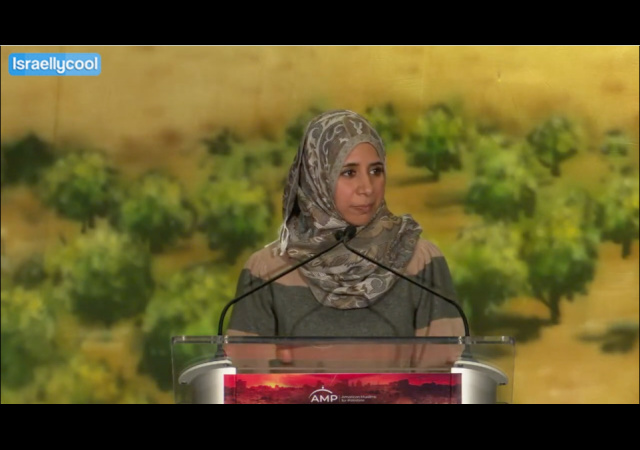 Remember Zahra Billoo? The Women’s March voted her off its new board in September 2019 because of her anti-Israel tweets.

Billoo is in the news again because of the anti-Semitic speech she delivered at a convention. Israellycool brought the details to light:

But just how vile – and dare I say it, dangerous – she is, really came to the fore at last week’s American Muslims for Palestine’s (AMP) convention called On the Road to Free Palestine, where Billoo was one of the featured speakers.

In her speech, Billoo made it very clear that “Zionists” – who she paints as rich and powerful (a typical antisemitic trope) – are the enemy. And by enemy, she means those not just opposing palestinian Arabs but Muslims as a whole. Chillingly, she promises this enemy will be defeated.

And who are these “Zionists”? Billoo does not need to pretend to her sympathetic audience, so she includes the likes of the Jewish Federation, “Zionist Synagogues” (which means all Orthodox synagogues and the majority of others, since Zionism is integral to Judaism) and Hillel chapters on “our campuses” (i.e. Jewish students).

And the J-Streets of the world should also take note: Billoo warns about what she calls “the polite Zionists”, stating they are no friends of the Muslim community either.

The hatred dripped out of Billoo’s pores. I would normally add something sarcastic, but this crap is dangerous and violent.

The hatred goes towards the Jewish organizations that bow and submit to people like Billoo and Linda Sarsour:

So oppose the vehement fascist, but oppose the polite Zionist too. They are not your friends. They will not be there for you when you need them. They will take your friendship and throw your Palestinian brothers and sisters under the bus. Oh! You get along because you are all in Girl Scouts together? Talk to them about what is happening in Palestine, and see how that conversation goes.

The Jewish organizations (yes, that includes you, J-Street) want to attack Muslims because “they are afraid that Muslims advocate for Black Lives Matter, police accountability, homelessness, against poverty, for the environment and ‘a free Palestine.'” More:

She explained that the Israeli military trained police officers in the United States to “kill unarmed black men, women and children.” Further, the technology “used at the US-Mexico border is the same technology used at the apartheid wall.”

Billoo managed to make the speech even more pathetic by promoting CAIR and AMP, encouraging people to donate to the organizations. I guess they’re the only ones who can save us from the Jooooos:

And I am not going to sugarcoat that, they are your enemies. There are organizations and infrastructures out there who are working to harm you. Make no mistake of it. They would sell you down the line if they could, and they very often do behind your back. I mean the Zionist organizations, I mean the foreign policy organizations who say they are not Zionists but want a two-state solution. I am not a Palestinian myself, but it is my understanding that that is laughable. So know your enemies.

CAIR National backed up Billoo. There is a video of her vomiting anti-Semitism, people.

Yeah, that's not what she said or what we believe. But go ahead, keep lying. We expect nothing less from The @Jerusalem_Post (fun fact: originally named The Palestine Post), a far-right website that acts as a mouthpiece for Israeli apartheid. https://t.co/QdlN8F32oo

Even the ADL couldn’t ignore this one! The ADL, despite what Billoo claimed, is not much of a fighter when it comes to anti-Semitism. It’s friendly with the DNC, which we all know does not care about anti-Semitism.

Throughout her speech Ms. Billoo blamed America’s Jewish institutions – from civil rights orgs to respected campus orgs to charitable orgs to virtually every synagogue in the US – for a variety of America's illls, including Islamophobia. Classic conspiratorial #antisemitism. https://t.co/nw05CZwWHV

She spins a vast conspiracy around Jewish orgs supporting poverty, homelessness, and police brutality and attacking Muslim Americans for their opposition. Claiming that American Jews are working to subject our fellow Americans to poverty and brutality is wildly antisemitic.

To so brazenly refer to the vast majority of American Jews as enemies solely because of their connection to the Jewish homeland, to repeatedly blame Jews for Islamophobia, and to unapologetically promote tropes used against Jews for millennia, is grotesque.

Ms. Billoo’s speech was not a critique of Israeli policy. It was part of a long campaign to push American Jews out of social justice and civil rights spaces. To be clear, Ms. Billoo’s speech, and CAIR’s support for it, are both blatant acts of antisemitism.

More of the usual pap from the Committee to Apologize for Islamic Reprobates.

That would be a big NOPE!

Islamophobia is the reality that the followers of Muhammad attack and try to kill those who are not followers of their cult. Islam has no tolerance for the infidels and will lie or harm them without a second thought because the Koran tells them it is ok to do so.

Predication: Before the end of Slow Joe’s term in office we will have another attack on America by the Taliban or Muslim Brotherhood.

The FBI will pull off a second pulse nightclub and all the usual idiots who are eternally victims of fear mongering militants marching America to war abroad and censorship/loss of freedom at home will be fooled hook line and sinker and the victims of the FBI will not have died in vain.

There is no terror threat.

I’m not Islamophobic, I just don’t want to be near any 5th century death cult adherents who blow up unannounced.

Poor Michigan I hear it is a terror attack a day in that state which has almost all of the nations Muslims…oh wait the FBI hasn’t set up a Pulse Attack yet so the actual number is zero.

Islamophobia is another name game which seeks to whitewash terror and anti Semitism-The ADL finally gets it.

In your opinion is the ADL representative of Jews? If I go to Israel would I find lots of Greenblatt clones? No?

Then why do you think CAIR represents Muslims?

You are all over the place and a mess… Get it together and come back when you have some coherence.

Her jackass why don’t you answer the question instead of going straight for the insults.

Finding a powerful leftist SJW who happens to be Muslim is an anti-Semite is not an excuse to be a Muslim hating bigot.

Does co-exist occur before or after 7th century barbarians chop off our heads?

So nobody hated Jews before the 7th century and every anti-Semite is a Muslim?

Do yourself a favor and try to master critical thinking.

Run the numbers… who are the premier haters of the Jews in the 21st century.. or for that matter.. over the centuries as codified in their religion? The Nazis had the ability to rack up the numbers… but that was a blip in time.

Over time? Jews have been lived in Muslim countries from the day Heraclius lost Syria to the caliphate to the expulsion by Muslims from their countries following the end of the Second World War that is a very long period.

Anti-Semitism is an opiate that is given in loser countries and going over most Muslim nations they are not successful places to be.

every anti-Semite is a Muslim?

No, but every devout Muslim is an anti-Semite.

You know that is a lie.

From the only religion that gets a pass.

It’s not a phobia. It’s contempt.

Islamophobia is just another word for fear of terrrorism.

There’s no such thing as Islamophobia either. Nobody is afraid of Islam. It’s the Muslim equivalent of a race card.

I have seen this woman speak twice at UC Irvine over the last decade. The first time, she was speaking at Islam Awareness Week and extolling the virtues of Islam. In answer to my question, she did acknowledge that Islam has the death penalty for adultery, but was quick to add that it was for both men and women.. A couple of years ago she appeared at bash Israel week and opened up by informing the audience that there were “guests” among them who wanted to twist everything she said etc. She sees enemies around every corner.

It’s nice to see Mr Greenblatt and the ADL finally come out of their slumber when it comes to anti-Semitism coming from Islamic quarters.

CAIR is an organization backed by corporate America without any actual basis in the Muslim community. It is the Islamic clone of the ADL eternally hunting for drummed up racism with the big difference being that CAIR is anti-Semitic.

If you locked Greenblatt in a room with Billoo they would agree on everything in the world besides Jews.

Billoo also is interpreting Social Justice the right way. If the way things are is just the result of privilege and racial favoritism……

It isn’t without reason that the head of the teachers union says we are an oppressor class. If you believe in the CRT/Oppressor races/racism is what gives you your success etc ideology of the left anti-Semitism is a natural extension of it.

Racialist ideology is always going to be anti-Semitic. You can’t say “Yes I love the white hatred part but please don’t hate me to”.

911 terror apologist. Would think of you as useful idiot if only you were useful.

Strong stuff from Greenblatt. Too bad the ADL annihilated it’s credibility for eternity when it chose to consort with the rancid hatemongering Al Sharpton.

He just is attacking a rival who does exactly the same job he does.

And by enemy, she means those not just opposing palestinian Arabs but Muslims as a whole. Chillingly, she promises this enemy will be defeated.

This is straight from the Quran. The Jews are the eternal enemies of Islam, and Islam commands their extermination. The Last Day (when the world will come to an end, the dead will be resurrected and judgment will be pronounced on every person) will not come until that happens.

Suleiman the Magnificent didn’t seem to think so.

they are afraid that Muslims advocate for Black Lives Matter, police accountability, homelessness, against poverty, for the environment

Muslims do not honestly advocate these things, they are mere strategic positions held during conquest. For what they actually advocate, see how Muslim countries are run.

CAIR is a leftist organization identical in almost every way to the ADL.

To hell with all Muslim supremacists and their Dhimmi-crat comrades.