Billoo claimed an Islamaphobic smear campaign cost her the job. It was actually her anti-Israel and saying the FBI recruited “mentally ill young people” to join ISIS. 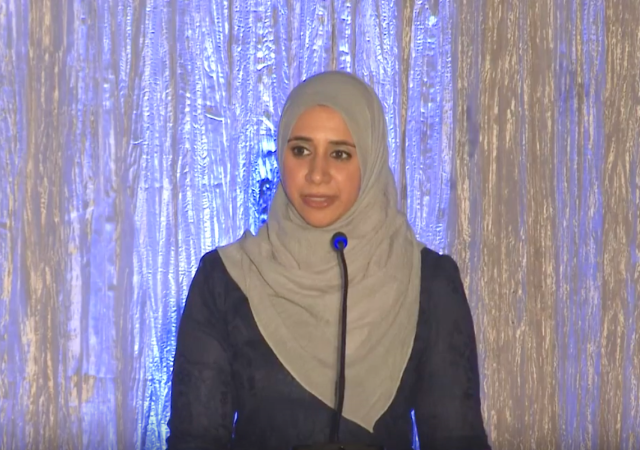 On Monday, the Women’s March voted off its board Linda Sarsour, Tamika Mallory, and Bob Bland due to the anti-Semitism controversies surrounding them.

The organization announced 16 new members to the board. I noted in my Monday blog that Zahra Billoo could cause problems for them due to her past statements on Israel, the FBI, and the IDF. She once called herself “a proud anti-Zionist.”

I was correct. Billoo tweeted early this morning the Women’s March booted her off its board.

Billoo works as “a civil rights attorney and executive director of the San Francisco Bay area chapter of the Council on American-Islamic Relations.”

Look at these tweets. Billoo blames her dismissal on an Islamophobic smear campaign.

A few hours ago, I was voted off the @WomensMarch national board. 2/

This followed an Islamophobic smear campaign led by the usual antagonists, who have long targeted me, my colleagues, and anyone else who dares speak out in support of Palestinian human rights and the right to self-determination. 3/

The past 48 hours have been a spiral of bad news and smear efforts. Part of the smear campaign is motivated by opponents of the Women’s March, because the organization has traditionally challenged the status quo of power and white supremacy in our country. 4/

However, much of the campaign is driven by people who oppose me and my work challenging the occupation of Palestine, our country’s perpetuation of unjust and endless wars, and law enforcement operations targeting the American Muslim community. 5/

We merely pointed out your past statements. The Reagan Battalion tweeted out as many as they could find. These included Billoo saying “the Israeli Defense Forces, or the IDF, are no better than ISIS. They are both genocidal terrorist organizations.”

At least she condemned ISIS? Nah, not good enough.

Back in 2014, she proudly declared she “will not jihad, khilafah or sharia.”

Billoo told one person she does not think one can “be Zionist and nice.”

It gets better. Billoo wrote that “racist Zionists who support Apartheid Israel” scares her more than “the mentally ill young people the #FBI recruits to join ISIS.”

Yes, not only is she afraid of those racist Jews, but she claimed the FBI recruits mentally ill young people to join ISIS.

National Review reported that Billoo stated on Facebook in 2017 that she would not see Wonder Woman because it stars Gal Gadot. The actress once served in the IDF. Of course, Billoo added that she would also never “see a movie in which the lead actress was proud of being a member of ISIS, al-Qaeda, or the U.S. military.”

Because the IDF and U.S. military are totes the same as al-Qaeda and ISIS.

Billoo does not believe Israel has a right to exist. She compares American Jews who move to Israel and join the IDF to those in ISIS. She shames Muslims who do not share her views. 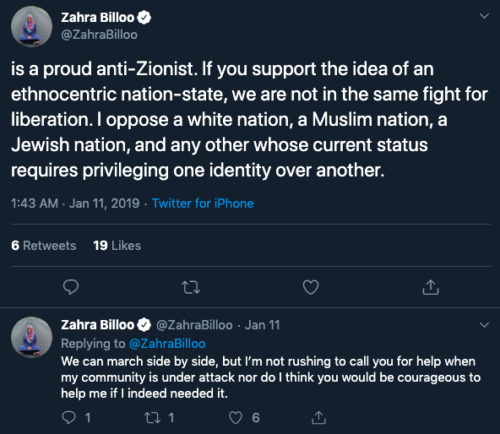 Here are some tweets by the new leader of the @womensmarch. pic.twitter.com/JDViOUzjmQ

The Women’s March wants to distance itself from the racism that swells within it. I want to know why they did not vet Billoo. How did these tweets and statements escape them?

This much is true, apart from characterizing it as a “smear campaign”.

However, much of the campaign is driven by people who oppose me and my work challenging the occupation of Palestine, our country’s perpetuation of unjust and endless wars, and law enforcement operations targeting the American Muslim community.

This is true. I’ve got no problem with that description.

“Islamophobia” is much like herpetophobia ophidiophobia (I just learned a new word). It’s an irrational fear, because #NotAllSnakes. But not too irrational, because #QuiteALotOfSnakes; venomous snakes may be a minority, but they’re a significant minority, and if you can’t tell the good ones from the bad it’s rational to be cautious around all of them while waiting for better information.

At least you can learn the morphology of venomous snakes and identify them on sight.

Some of the identifying features of snakes are on their ventral surfaces. It’s considered poor practice to turn a venomous snake on its back just for a good look at its scales. But until you turn it over you don’t know if it’s, say, a harmless water snake or a cottonmouth. Some think it’s best to assume the worst.

Are you going to get close enough to a pit viper to see the pits? I’m not.

Ah, the old 95% give the other 5% a bad name. It just seems to apply to so many of the disenfranchised these days.

side note, I’ve not been able to kick in as much on LI fund raisers of late, so I’m making a point to click on the banner ads whenever I pass through. I’m presuming those clicks put a “clink clink” in the LI piggy bank. Friendly reminder to regulars to do similar if it makes a difference.

Liberal feminist 1, “Hey, these Muslim ladies we have on board are pretty anti-Jewish, aren’t they? Maybe we should replace them.”

Liberal feminist 2, “Yeah, I noticed that too. Lets bring in this other Muslim lady.”

Liberal feminist 1, “Hey, this new Muslim lady seems as anti-Jewish as the other ones. Maybe there’s something to this anti-Jewish stuff being in the Qur’an and Islam’s practices.”

I want to know why they did not vet Billoo. How did these tweets and statements escape them?

We don’t know that they were unaware. What we do know is that the Women’s March has been thoroughly infiltrated by these activists. Pretty obviously, really; Palestinian political demands have very little to do with women parading around in novelty hats. I expect that whoever they find to replace Billoo will be every bit the Jew-hater her predecessor is, though perhaps not quite so vocal about it.

Any faithful Muslim on social media will have the same type of material out there. And I’m loving it being uncovered. Couldn’t happen to a nicer bunch.

We all know that when we we interview for a job, the employer will look through our social media profiles. If we have questionable things on there, they will not hire us.

If the Women’s March treats its applicants the same way that all of us get treated by our employers, they would have found and rejected the anti-Semitic girls before ever hiring them.
And the NYT should take note.

“Women’s March” pines for newfound relevance and a renewed respectability. Ginned up hate for Israel is not as popular as they had previously tried to make it for years under the old guard. So, general housekeeping is in order. After all, there’s a POTUS election coming up very soon and Women’s March will be on the march once again. Plus, if a Democrat actually does prevail, the dark money and Soros [et al.] financed Women’s March has got a whole new 4-year term in which to march and spin up loud and obnoxious AstroTurfed protests in DC. They can renew their anti-Israel BDS efforts then with a potential Democrat POTUS who’ll likely be at least a tacit ally if not an explicit foe of business as usual with Israel.