“the president is perfectly comfortable with the Department of Justice settling with the individuals and families who are currently in litigation with the U.S. government” 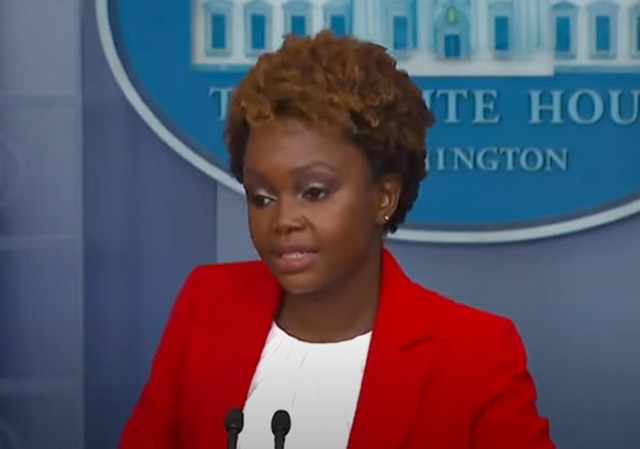 Two days ago, Peter Doocy of FOX News asked Joe Biden about the payments of $450,000 to illegal immigrants who were separated from their families at the border under Trump. Biden called the report “garbage.”

Now the White House is contradicting him.

Brett Samuels reports at The Hill:

The White House on Thursday walked back President Biden’s comments from the day before that the administration would not be paying migrants separated at the border during the last administration $450,000 each, clarifying that the government would be willing to settle out of court with those families.

“If it saves taxpayer dollars and puts the disastrous history of the previous administration’s use of zero tolerance and family separation behind us, the president is perfectly comfortable with the Department of Justice settling with the individuals and families who are currently in litigation with the United States government,” White House principal deputy press secretary Karine Jean-Pierre told reporters.

Biden on Wednesday was asked about reports that his administration was contemplating a payment of roughly $450,000 per person for separated migrant parents and children.

“That’s not gonna happen,” he told reporters when asked about the reported plan.

Jean-Pierre on Thursday asserted Biden was reacting specifically to the $450,000 figure that was mentioned when he was asked about it.

“As press accounts to date indicate, DOJ made clear to the plaintiffs that the reported figures are higher than anywhere that a settlement can land,” she said.

The Hill’s media reporter Joe Concha appeared on FOX News this morning to talk about this and said this is precisely why we haven’t seen Biden give a press conference in more than 110 days.

This is why people are still wondering who is really in charge of this administration.

It doesn’t appear to be Biden.

Disgusting and indefensible. The vile Dhimmi-crats can toil mightily to wrap a bow tie on this “settlement” giveaway, but, to any rational observer, it just stinks. No payouts for illegal aliens.

This is bad comedy.

As soon as MAGA candidates take over the Congress, look for a repeal.
Sorry. Not, sorry.

At least this one is not a lying cockroach like Jen Psaki.

Tell them sake announce months ago that she was resigning? Does it take two weeks to flatten the podium?

Sorry, try it again without the background noise and distractions…

Didn’t Psaki announce some months ago she was resigning? Does it take two weeks to flatten the podium?

If it wasn’t so awful, it would be great comedy.

Funny how “White House” and “Biden” are totally understood as 2 separate and different things.

The Brandon administration is an embarrassment.

Right. Just the first four words of the headline give you an incontrovertible idea of how far up its own into the Twilight Zone the current administration is.

To increase clarity of communications from the president to the public, the White House Press Office will now provide the press with official transcripts of all presidential utterances. So as to properly prepare the press for correct reporting, these shall be provided to the press at least 24 hours before they are made. Any utterances made by the president in deviation of these official transcripts are deemed unofficial and should be disregarded.

Thank you in advance for your cooperation and understanding.

Of course not! Where in the constitution does it say the president may speak for himself?

The president is supposed to say things like, “I’m not supposed to take any questions.” Or, “I was told the first person I am supposed to call on is so and so.” Or, “I will get in troulble if I answer that.”

That way there is plenty of wiggle room and you can backtrack quickly.

JIll Biden, mother of the year:

you just go around spam other blogs?

You must go around talking like a caveman struggling with English.

Wow, this is surreal. The NYT confirms the diary, on the same day Project Veritas gets raided by the FBI for receiving but NOT printing the diary, then attempting to return it to Ashley. Then the NYT (who is being sued by Veritas) calls Veritas for a “statement.”

It took the Junta less than 24 hours to over rule Biden on payments to illegals.

If you really want to understand the insanity of the Biden ‘administration’, look no further than that incompetent yenta – and mother of the century – Jill Biden.

Jean~Pierre added, “Please note, ‘President’ Biden is not authorized to speak on behalf of the United States government in matters of foreign or domestic policy.”