Twitter Founder Jack Dorsey Resigns: ‘This was My Decision and I Own It’

Twitter Founder Jack Dorsey Resigns: ‘This was My Decision and I Own It’

The new Twitter CEO needs to go back and delete at least one tweet when he asked why he should “distinguish between white people and racists.” 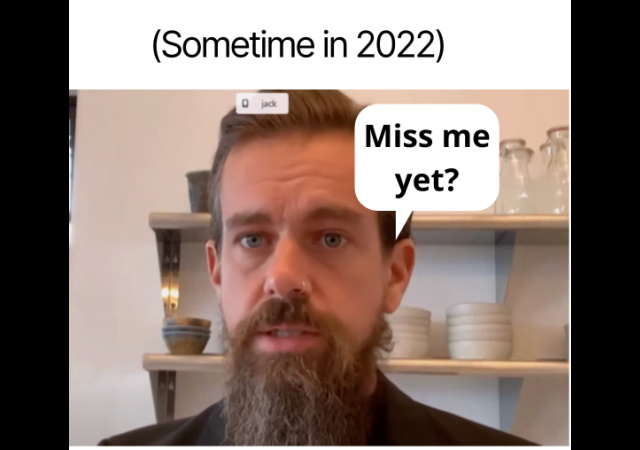 Reports emerged this morning that Twitter CEO Jack Dorsey left the company. People thought the company pushed him out, especially since Twitter shares surged after the reports came out.

Twitter stakeholder Elliott Management almost ousted Dorsey in 2020 when its founder Paul Singer “wondered whether Dorsey should run both” Twitter and Square, his digital payments company.

Dorsey confirmed in a post that he made the decision himself. The change happens today, but he will remain on the board until the 2022 stockholder meeting.

not sure anyone has heard but,

Salesforce President and COO Bret Taylor took over as chairman of the board.

Chief Technology Officer (CTO) Parag Agrawal will become the CEO effective immediately. Dorsey said he chose Agrawal to take over years ago since “he understands the company and its needs.”

Agrawal needs to go back and delete some tweets. Someone dug up this oldie from 2010. Agrawal started working at Twitter in 2011 so remember. It was written before he worked there. It also looks like he quoted someone. We need more context.

I know we have our gripes about Twitter. We know the company censors people and doesn’t stick to its rules. We see anti-Semitism everywhere and call for violence against the right-wing that never get taken down. But say one bad thing about the left you’re banned!

But Glenn Greenwald is right. Dorsey has pushed back against making people pay for Twitter and other ways to make it not so user-friendly.

That could explain why the Twitter shares went up when we learned about Dorsey leaving the company. The shareholders might have thought Dorsey held back Twitter from making more money and expanding its profits.

Hard not to see this as bad news. I don't think it's been fully appreciated that on key SV issues – including decentralization, transparency and free speech – @Jack has been far better than most, and way more responsive to critiques. We'll see what happens but it seems not great: https://t.co/drWsmMZukj

Now he has ample time to take some medical leave and get that goat scrotum surgically removed from his face.

RasputinJack is laughing all the way to the bank. His stock shot up on the news he was leaving. Too bad his idea of fun is laying semiconscious in a cave in a puddle of his own urine and 💩

Who cares. Hope all of those socials go bankrupt.

Imagine if they made Twitter pay to use 🤣🤣 That would be a gift to humanity as I suspect hundreds of millions of users wouldn’t be prepared to pay to use it???

So, young Master Dorsey will now retreat to his Fortress of Solitude where he can grow his hair and fingernails while hiding from germs and Twitter will be run by a guy who was grew up in India and thinks “Our role is not to be bound by the First Amendment… focus[ing] less on thinking about free speech, but thinking about how the times have changed.”
The destruction of freedom shall continue until morale improves!

Only if you’re trying to force it to be one.

I wasn’t serious….however, the timing is curious.

I said what I did, because what you wrote reads like the type of headline one would find over its citizens free press.

There is plausible cause. The trans-social pedophile, incestuous, politically congruent movement includes a lot of socially forward people…. persons.

You keep freezing things like that, and you’re gonna make us think that you’re a studies professor.

at this point it would be re-phrasing

Gone from bad to worse. His replacement makes him look middle of the road.

Yep. The twitterverse is about to learn that Dorsey was the (relatively) moderate, rational actor of the company.

And that’s why they got rid of him.

Dorsey’s replacement will only do what Dorsey would have done sooner or later. The trend on Twitter has always been towards more totalitarianism, not less.

He owns nothing but a disgusting beard.

Does that include birthing persons?

Yes it does. You should give wide berth to birthing persons.

I use Twitter as often as I smoke meth.

Both have equal value to society.

That’s about as often as Biden has a rational thought.

Most conservative blue checks are assuming this means their days on twitter are now definitely numbered. Probably well before the midterm stretch. And they are planning accordingly.

Eventually the only ‘conservatives’ on twitter will be Bulwark, Dispatch, and Lincoln Project grifters. And a few NRO hangers-on. Plus Liz Cheney.

Those fools buying and running up the stock value today may rue the day.

I have never understood the wacky fascination some conservatives have with Twitter and their obsessive desire to get Twitter to live up to its terms of service. It’s like American blacks clamoring to join the KKK.

It is useful when it works. You can very quickly follow breaking news and other current events. 90% of the core information on the Kenosha incident was up within an hour of the actual event.

If you were following it from the MSM rather than the filmers on the ground, you’d never have seen any of it.

Of course, Twitter’s new rules just banned that, so we’ll see how long it lasts.

Glenn Greenwald is quite wrong. The fact that Dorsey MIGHT be slightly less awful than his potential replacements on free speech (which remains to be seen) is hardly worth mourning. Dorsey is a totalitarian control freak, not a free speech warrior. Is it really “better” if he stomps me in the face less often than whoever follows him?

Ultimately this could turn out to be good news if Twitter blows up its business model by charging users.

This isn’t bad for people that want twitter to fall over the leftist cliff. Jack was dangerous because he carried a modicum of legitimacy that kept thing away from the ledge.

Nothing says legitimacy in the boardroom like a goat-scrotum on your face and a pierced nostril.

No comment there, but I meant a modicum of what passes for fairness in allowing dissent.

If an unabashed totalitarian gets in there, he will run it just like the Brandon admin into the ground and people will opt out.

At this point, that may be the best possible outcome.

That’s exactly what they want: to destroy the thing that made Trump happen.

Given the new guy’s day one rules, that looks like exactly what we’re going to get too.

You certainly have a thing about goat scrota.

Well, if these covid lockdowns have taught us nothing else, it’s the importance of knowing when to listen to the authorities.

And seeing how I don’t have a horse in this race, I’m going to defer to your expertise here. Is there some other sort of scrotum that bears a closer resemblance?

It simply amazes me that any conservative would continue to use Twitter when there are other options available.

Substack is something of a replacement, but it is not able to handle fast breaking news.

Locals is similar. And both are subject to natural echo chambers.

At this point, the tweet system is the best we’ve got, and there really hasn’t been anything up to replacing it, that I’ve seen. The only real threat to Twitter is them making themselves so ideologically purified that they destroy their core utility, not the risk of anyone doing it better than they currently are.

That said, the *are* on track for destroying themselves.

Thats proof you can be a MORON & rich right there.

Now he can join the Taliban. he would fit right in