Deflection: “culture warriors are labeling any discussion of race or discrimination as CRT to try to make it toxic and to try to stop us from teaching students accurate history” 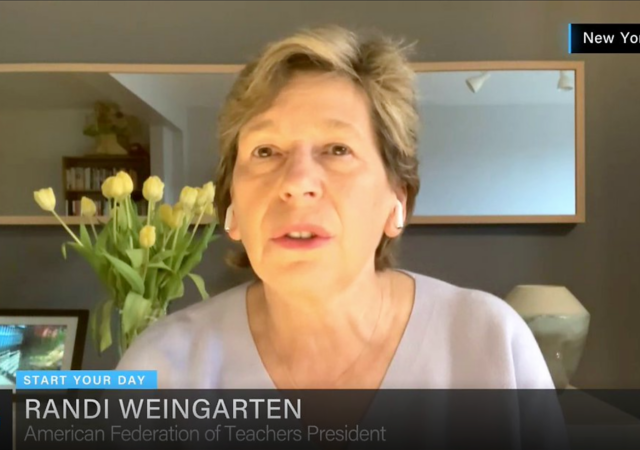 Last we saw Randi Weingarten, head of the anti-student and anti-parent American Federation of Teachers, she was speaking at the last campaign rally in Virginia for Democrat Terry McAuliffe. Her inclusion at the rally was proof positive that the left went into the election utterly clueless to the fact that parents and voters had had enough.

Nearly two years of kids being used as political pawns and parents being portrayed as domestic terrorists by the Randi Weingartens of the world led to the utter thrashing at the polls of Democrats across the commonwealth. Surely, the left and their feckless leaders, such as Randi Weingarten, would get the message sent by voters?

Ha ha. Not so much. Ms. Weingarten just today:

First & foremost, we must listen to parents. They are our partners. Let’s be clear tho-culture warriors are labeling any discussion of race or discrimination as CRT to try to make it toxic and to try to stop us from teaching students accurate history.  https://t.co/ykuZkUiE08

Let’s unpack her tweet. First off, she in no way wishes to listen to or partner with teachers. Her diabolical union led the efforts to keep schools closed across the country during the pandemic, holding kids hostage and inflicting pain on families until their political agenda was met. She and her radical allies think they own our kids and that parents are a mere impediment that must be kicked aside.

She also doesn’t seem to recognize the fact that these “culture warriors” she derides are, in fact, parents. Just regular people, not necessarily even right-leaning. They did, however, just lead an incredible  revolution against school boards and teachers unions who dare to insert themselves between parents and their children. And, truth be told, if Weingarten and her fellow educators had bothered to listen to the parents even a little bit, things might have been very different.

Then there’s the matter of CRT and “accurate history.” Let’s face it, Randi Weingarten wouldn’t recognize “accurate history” if she tripped over it in her Birkenstocks. What parents know, and the radical left fears, is that racial tension is actually very rare in schools. Kids are kids — they don’t hold the political biases of adults. And it’s because they are generally fair and good hearted that Randi Weingarten must lead an effort to sow division and teach hate in children.

Deflect, deflect, deflect. That’s all the left has in the wake of their shellacking in Virginia. That might have worked in 2020, but it sure as heck won’t work as we head into 2022.

Liberal Playbook: Never take blame when you can blame others and there are always others to blame.

Part B: always accuse your opponent of the crimes you are committing.

No need to waste time attacking it. There are hundreds more straw men behind that lying in wait. I think they must have a straw man machine connected to an assembly line.

who is Bolger Consulting, and what is the connection to this article?

Bolger Consulting is an arm of the company that specializes in voting machine fraud, used to lie to voters for people like Randi Weingarten. Well within the scope of the article.

The Parents and other taxpayers are not your partners, they are your employer. They don’t work for you, you work for them. These Parents and other Citizens are 100% correct to demand access to the existing curriculum, training records, invoices and anything else that occurs on taxpayer funded time, on taxpayer funded grounds or by/with/through elected/appointed official email and personal email used to conduct school related communication.

If Weingarten actually believed any part of what she stated why does her organization work to deny complete transparency to Parents and taxpayers? Why would she have personally campaigned in favor of McAuliffe instead of denouncing his repeated claims that ‘Parents shouldn’t be telling teachers what to teach’?

She doesn’t believe it. She is reading the National room post elections and has discovered that Parents and taxpayers have had enough of education bureaucrats and union grifters running the show. This effort to clean up the disgraceful history of the past two years won’t work. You can’t erase what we saw during zoom class or where teachers refused to come back after they were prioritized for the vax or the ongoing unscientific hysterics to forcibly mask children. The CRT/Equity distortion is just the tip of the anger coming your way.

In the sixties and seventies families fled cities, i part because of civil liability, where who defended their property sued criminals, they lost their shirts. White kids who got on school buses were robbed, and often beat up by a gang of minority students. I walked to and from school, over a mile to avoid that. In the school, going to the bathroom was risky, any money was often taken by force. On the way into school, it was common for a group to surround white students, and steal their lunches.

It is bullshit to say they are all just kids. many are hardened criminals by they time enter high school.

As toxic a figure as Hillary Clinton.

And even more nauseating.

She knows very well that no parent object s to teach US History including history that involves slavery and race relations. The objection is to seeing everything in the current dat through a prism of race and treating people based on their skin color due to “implicit bias” or an oppressor-oppressed models. She is a leading proponent of neo-racism and her statements are beyond disingenuous.

SHE AND AG-GARLAND HAVE GOT TO GO.

If CRT is “accurate history,” then what have you clowns been teaching from 1916-2016, and why has your organization been lying to America all that time??

For the past 40 years K-12 public school educational outcomes have deteriorated while the per student cost has increased immensely.
crt is an extension of the affirmative action nonsense and further confirmation that the K-12 public school teachers union, weingarten, and her union/dem party cabals have actually failed to teach their students useful life skills, particularly the black student population. How does crt effectively increase a student’s life-career skill stack ?

Teachers complain that they cannot be parents that kids come to them from broken families …..exactly how is crt going to fix decades of the broken home family culture ?

crt is a blame game that selectively blames the historical others; while far too many of the present black communities take no blame for their harmful individual actions, and self destructive community behaviors.
How does blaming make race relations better and improve everyone’s educational outcomes ?

Historically race has been used a weapon. For example, hitler launched a race theory and yet randi weingarten who was born to a Jewish family seems to have suppressed or forgotten who hitler blamed and what hitler did to the Jewish race of Europe.

weingarten needs to resign because she is another in the
Let’s Go Brandon pool.

In the first chapter of Hans Christian Andersen’s “The Snow Queen” a demon invents a mirror that distorts everything to make it ugly – a lovely landscape looks like boiled spinach, normal people look hideous and kind thoughts become wicked grins.

The demon is amused by it but of course he had a school and a following, and his followers believed that, at last, it was possible to view the world as it really is. Nothing went uninspected by this mirror.

There’s the strawman right there.

That witch must have come up with the “accurate history” nonsense while partying in Puerto Rico last weekend with Chuck Schumer. Yes, she was down there with Chuckie.
Good luck, parents already know that CRT is not accurate by any stretch and that is why parents are so angry.

Weingarten is a Marxist hack living off the mandated dues of actual teachers. If there was a right to work for teachers, this hack would be toothless.

“First & foremost, we must listen to parents. They are our partners. Let’s be clear tho-culture warriors are labeling any discussion of race or discrimination as CRT to try to make it toxic and to try to stop us from teaching students accurate history. https://t.co/ykuZkUiE08

A prime example of the left projecting their crimes on the people. Is it as accurate as the infamous 1619 Project?

How is she different from all the other Marxist/socialist/communists, like the ChiComs, who indoctrinate their twisted beliefs on children?

Organized homeschooling may be the only answer.