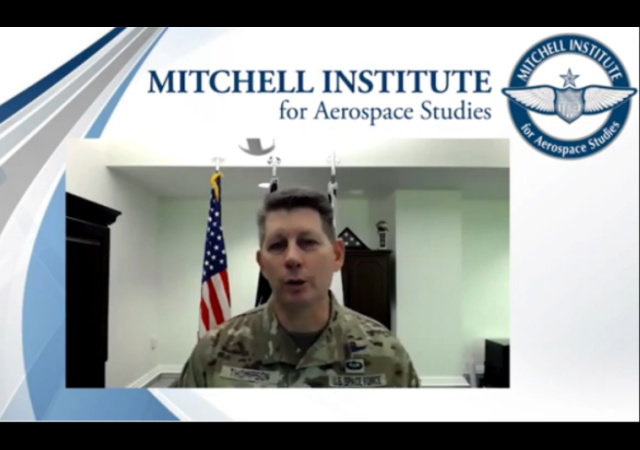 Last month, we reported that China successfully conducted a test with a hypersonic missile system.

Now a US Space Force general is warning about the state of U.S. hypersonic technology compared to Russia and China.

American hypersonic missile capabilities are “not as advanced” as those of China or Russia, Space Force General David Thompson said Saturday at the Halifax International Security Forum in Canada, signaling that the U.S. is behind in developing the newest and most cutting-edge weaponry.

Thompson admitted during an interview that the U.S. lagging behind the other two countries is potentially dangerous for national security.

“We have catching up to do very quickly, the Chinese have an incredible hypersonic program,” he said. “It’s a very concerning development … it greatly complicates the strategic warning problem.”

Thompson also expanded upon the capabilities of hypersonic missiles and explained why Americans should be concerned.

He compared a hypersonic glide vehicle to a “magical snow ball.” Normally, “if I’m throwing a snowball at you, the instant that snowball leaves my hand you have a sense of whether or not it’s going to hit you.”

That is how strategic warning systems have operated for decades. “A hypersonic missile changes that game entirely,” he said. The hypersonic missile does not travel in a predictable trajectory. “Combine that with a fractional orbital bombardment system, I’m going to throw the snowball, it’s going to go around the world and it’s going to come in and hit you in the back of the head.”

“And so that’s the kind of thing we’re dealing with, that you no longer have that predictability. And so every launch, regardless of where it’s headed, now has the potential that it could be a threat,” said Thompson.

“And even if you can track that maneuvering weapon, you don’t know until very late in the flight where it’s going because it’s maneuvering the entire time … and you’re not sure whether it’s an attack,” he added. “You don’t know the target until the last minute. And so that changes the strategic warning game.”

Fortunately, there is some good news from Space Force. The first successful Astra launch carried a payload for the Space Test Program called STP-27AD2 through a contract arranged by the branch through its Defense Innovation Unit.

The Rocket 3.3 vehicle, with the serial number LV0007, lifted off at 1:16 a.m. Eastern from Pacific Spaceport Complex Alaska on Kodiak Island. Astra scrubbed a launch attempt the previous day after more than two hours of delays.

The flight went as planned, with the first stage firing for about three minutes. The upper stage then separated and fired its single engine for approximately five and a half minutes, injecting the stage into an orbit nearly 500 kilometers high.

Check the following video to hear from Thompson about the build-up of the US Space Force.

ICBMs are still 3 times faster than this hypersonic missiles.

So all of the sudden a space force is needed.

I wish woke was the only problem the military had, but it goes way way deeper than than, the US military is so entrenched on doing the things the same was they have always done things they can’t change, the had to be dragged into the 20th century and they keep doing things the same even when facts tell them they are wrong. example: look at the rockets used by Germany in the second world war, the tech used was developed by Dr Robert Goddard, the US military was too stupid to use it. From what I understand the US Army was going to back to trenches at the start of WW2 when the tech was there to make them death traps. Time to stop, I could go on and on,

We don’t need a hypersonic missile. We need actual military leadership with a backbone.

Until we fix that, say no to the hypersonic missile.

All the hype is the pigs getting ready to feed at the trough of another taxpayer boondoggle. And the people hyping this will tell you everything you need to know about whether it’s important. If the mainstream press starts to say “yes” then the answer most assuredly is no.

Interesting that the Space Force suddenly seems relevant. Almost like Trump knew exactly what he was doing – although the military leadership and MSM will never admit it.

And the way we’ll do it by increasing diversity, inclusion, and equity. And weeding out white supremacist anti-vaxxers and Trump supporters.

Because diversity is out greatest strength. Or something.

Which means we’re too late. We will not be catching up. Not when we’re discarding many of our best and brightest and replacing them with diversity hires and equity promotions. The real world does not work that way.

They only need to outspend China and Russia combined by 3 trillion dollars a year then they will become something worth funding!

We have a 4-star admiral who likes to wear dresses. Won’t that have the Chinese shaking in their boots?

Our spending on the military dwarfs China and Russia combined. If they have outrun us in tech then what the devil are we paying for? We aren’t paying for high training standards either.

Perhaps it is time to as our American tradition was through the vast majority of our history go back to relying on private means for tech development?

Thomas Edison was not a serving soldier. Nicola Tesla never wore a uniform, and Henry Ford was not in charge of tank production when he came up with the modern assembly line.

If we aren’t just not getting tech superiority but not even getting tech equality why are we saddling the next generation with this debt?

In fairness, we have absolutely no idea what China spends on its military and only a vague understanding of what Russia spends as it has some level of increased transparency relative to what the Soviet Union provided. All the estimates that we see published about China’s military are published by the same people who think we don’t trade enough with China.

It should also be pointed out that China has a robust espionage program that is stealing both government-developed and privately-developed technology, both civilian and military technology. IOW, we’re still developing tech independent of government but China is very adept at stealing that as well.

Russia is a Canada sized economy where would the money for a larger than reported military budget come from?

China does have an economy large enough to be cheating but what grounds do we have to think they are?

Military spending of the kind we are doing just isn’t normal for a nation at peace that isn’t preparing an invasion of some kind somewhere.

With the military going woke, lowering training standards and falling behind in technology what exactly do we get out of this historically unprecedented spending spree?

Caught by surprise again*. As a poster on this site famously asked “what do we spend on that money on our “intelligence” agencies for?”

My last read on hypersonic missile programs was that we have 8 separate programs funded by the Army, Air Force and Navy. 8 and none by Space Force.
Typical lack of focus by DoD. This is just a plea for more funding. We should have already had a successful program complete and fielded, yet here we are. Asking for more.

But, DoD is now using the right pronouns and paying for gender ‘reassignment surgery’ and that’s all that matters.

Since when did admitting how far behind with advanced missile systems become part of military doctrine? Operational security, what is it? If I said something like this during my service, I would have been thrown in the brig forever. And no matter how you shake it, this is unacceptable. Either they are trying to justify their existence or pandering for more funding. Also, we might not have hypersonic missiles, but mutual destruction is still on the table given our current arsenals. Nuclear subs, ICBMs, “rods from God,” and a host of tech that they aren’t blabbing about. Where do think the trillions of dollars we’ve spent on military industrial complex goes?

As long as we have a zero tolerance personal pronoun policy in place, who cares about gizmos and gadgets like guns, tanks, planes, bombs, missiles, etc?

But, but, but China is our fwend…

A truly clever clickbait headline. I was forced to click it to determine whether the “warning” was “we gots us some too,” or “we ain’t got none.”

As someone who stands to get work from hypersonics technology, I totally support this dire warning.